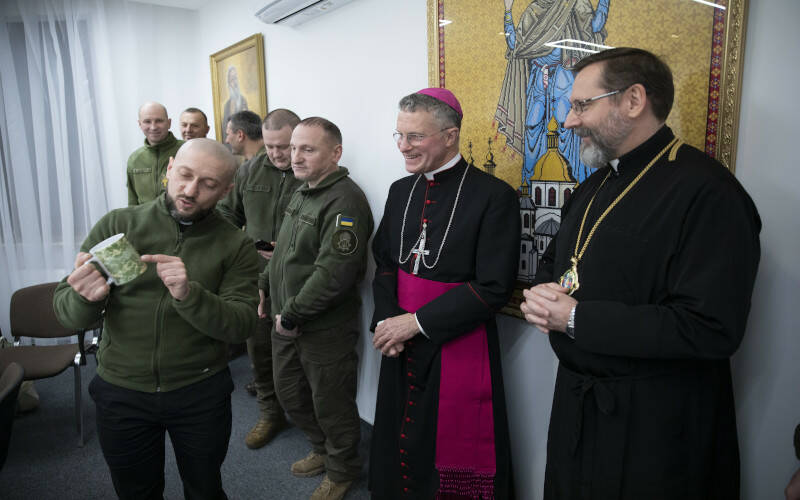 The archbishop’s meeting with the chaplains at the Ukrainian Catholic Cathedral of the Resurrection took place the day after he participated in funeral services in Lviv for three Ukrainian soldiers killed in battle.

Archbishop Sviatoslav Shevchuk of Kyiv-Halych, head of the Ukrainian Catholic Church, welcomed the archbishop to the cathedral and gave him a tour, which included the basement where hundreds of civilians living nearby took refuge in the early days of Russia’s war on the country.

The Ukrainian Catholic University in Lviv, in western Ukraine, put a long article on its website about Archbishop Broglio’s visit to the campus and the city Dec. 27-28.

“Today Ukrainians bring great hope to the world! Your nation has united and stood up to this unjust Russian invasion. In your resistance, we see hope for the future,” the archbishop was quoted as telling university officials.

Visiting the military’s Garrison Church of Sts. Peter and Paul Dec. 28, the archbishop met with Ukrainian military chaplains, some of whom had just returned from the front line, the university said.

“We have to take care of the people who are currently fighting,” he told them. “When I became a chaplain in 2008, I realized that my mission was to serve the men and women affected by war,” but “there is a significant difference” between caring for those affected by a war far from home, like in Iraq or Afghanistan, and caring for those fighting a war at home.

“My visit is a visit of solidarity and support,” the archbishop said.

“You and I, as ministers of the church who are called to support these people, must continue our work,” he told the chaplains. “We have to be with those men and women who serve on the front lines, physically or morally.”

“I want to assure you on behalf of all the U.S. bishops that we will continue to pray for all of you,” he told them. “And we sincerely hope that soon peace will reign in Ukraine.”

Expressing his condolences to the soldiers’ families and the entire nation, the archbishop said: “We are sincerely grateful to the defenders for the sacrifice they make for their country, and for all of us. We pray peace reigns in Ukraine and other parts of the world.”

“Once again, on behalf of all Catholics in the United States of America,” he said, “I extend my sincere condolences. We must continue to live in hope.”