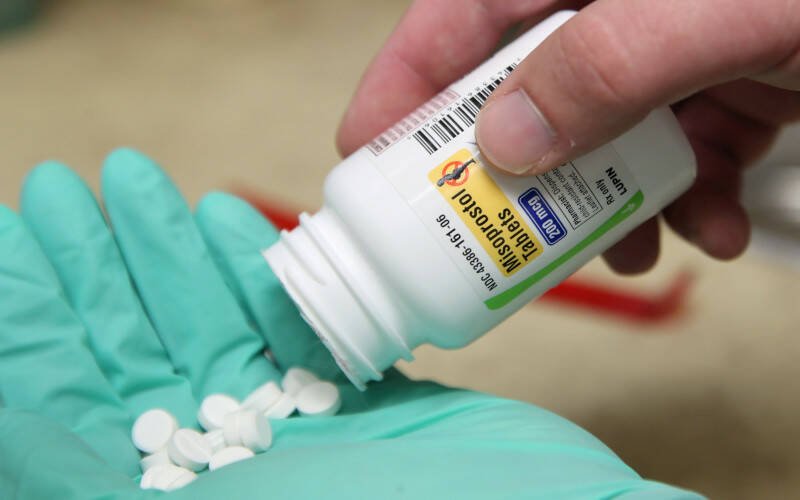 The drug misoprostol is seen in this illustration photo. It is used in combination with mifepristone to cause an abortion during the first 10 weeks of pregnancy. (CNS photo by George Frey/Reuters)

WASHINGTON (CNS) — By no longer requiring the abortion drug mifepristone to be picked up in person, the U.S. Food and Drug Administration is “merely succumbing to the abortion industry’s pressure to loosen safety standards,” instead of protecting the lives and health of mothers and children as it should do, said the U.S. bishops’ pro-life chairman.

“Every life is sacred: the lives of mothers and the lives of the unborn,” said Baltimore Archbishop William E. Lori, chairman of the U.S. Conference of Catholic Bishops’ Committee on Pro-Life Activities. “Not only does this decision further the tragic taking of unborn lives but it does little to care for the well-being of women in need.”

“Far from the accompaniment that women in crisis pregnancies deserve, this decision would leave women alone in the midst of trauma, often without any medical attention or follow-up care,” he said in a statement issued late Dec. 16.

Earlier in the day, the FDA announced it would permanently lift its requirement that a prescription for the abortion drug be picked up in person, which now allows clinics, medical offices and hospitals to prescribe the drug via telemedicine and send it directly to the patient by mail or through a mail-order pharmacy.

The agency said “the benefits of the drug outweigh the risks,” but it added a requirement that pharmacies that dispense the drug be “specially certified.”

Under the Biden administration, the FDA had temporarily lifted the in-person requirement amid the pandemic in April of this year, and said a full review of the regulation would be conducted.

The FDA voluntarily took this action when faced with a court order fought for and obtained in 2020 by the American Civil Liberties Union on behalf of supporters of legal abortion that would have forced the agency to lift the in-person requirement.

The brand name for the abortion drug mifepristone is Mifeprex. Also called RU-486, it is used to end a pregnancy during the first 10 weeks.

It is a two-drug regimen: A woman takes mifepristone first to block the body’s progesterone and stop the pregnancy from advancing. Then a day or two later, this is followed by a second drug, misoprostol, which causes cramping and bleeding to empty the uterus.

The protocol was first approved in 2000 with limits on its distribution. The FDA placed it in a special category — “risk evaluation and mitigation strategy” — which it does for drugs that may be associated with life-threatening side effects, according to the National Right to Life Committee.

“One of the essential tasks of governments is to safeguard the health and well-being of citizens,” but instead the FDA has loosened its health safety standards with its decision, Archbishop Lori said.

“I call on leaders of every level of government to stand with women in need by promoting policies that recognize the value and human dignity of both mother and child, rather than further promoting the devastating tragedy of abortion,” he said.

Carol Tobias, president of the National Right to Life Committee, said the FDA decision does not “make this abortion process safer for women. What these changes do is make the process easier for the abortion industry.”

“The FDA knows the dangers of this abortion drug combination, but in the name of political expediency, has lifted the safety measure requiring an in-person doctor’s visit,” she said in a Dec. 16 statement.

The American Medical Association and other major medical groups have said mifepristone has built up a strong safety record since 2000.

But according to the National Right to Life Committee, the FDA “has a record of nearly two dozen deaths and thousands of complications associated with the use of the mifepristone/misoprostol abortion-drug combination.” Agency documentation also describes “adverse events” from the use of the two drugs, including serious infections and severe hemorrhaging, the committee said.

“Making this change permanent puts women at greater risk because they may not be adequately screened to make sure they have no disqualifying conditions like allergies or ectopic pregnancy and are not so far along that the drugs will not work or are more likely to result in life-threatening complications,” said Randall K. O’Bannon, director of education and research at the National Right to Life Committee.

“Without that screening or monitoring, the likelihood of hemorrhage, infection and missed ectopic pregnancy are greatly increased,” O’Bannon added in a statement. “There is a greater possibility that a woman experiencing these adverse events may end up in the emergency room and could arrive too late for life-saving treatment.”

Georgeanne Usova, senior legislative counsel at the ACLU, said in a statement: “The FDA’s decision will come as a tremendous relief for countless abortion and miscarriage patients.”

The ACLU considered the in-person requirement “a medically unnecessary restriction and outdated.”

Like other opponents of the FDA decision, Melanie Israel, policy analyst at the Heritage Foundation’s DeVos Center for Religion and Civil Society, called it “a surrender to the abortion industry’s demands” and said it “comes at the expense of women’s health and safety.”

According to CNN, 19 states already have prohibitions in place “that effectively ban the use of telemedicine for medication abortion.”