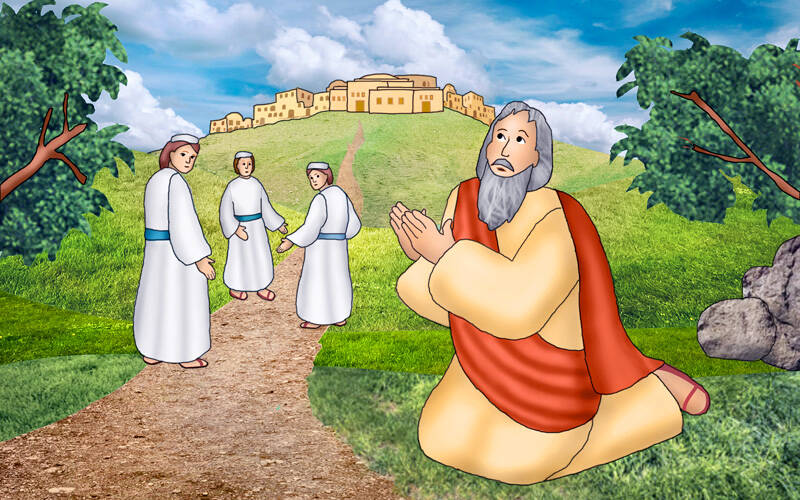 One day, Abraham was sitting in the entrance of his tent at the oak of Mamre as the day was growing hot.

Suddenly, he looked up and saw three men standing near him. He ran to greet them, not realizing that his visitors were God and two angels.

Abraham bowed low and asked the men to rest under the tree and have something to eat before going on their way.

Abraham hurried into the tent.

“Quick, three measures of bran flour! Knead it and make bread,” he told his wife, Sarah.

He then ran to his herd. He picked a choice calf and gave it to a servant, who quickly prepared it.

Abraham took the prepared calf along with some curds and milk and offered the food to the men. He waited on them under the tree while they ate.

After the men finished eating, Abraham walked with them to see them on their way.

Since God had promised to make a great nation from Abraham, he decided to tell Abraham what he was about to do.

“The outcry against Sodom and Gomorrah is so great, and their sin so grave, that I must go down and see whether or not their actions fully correspond to the cry against them that comes to me,” God said as they walked along.

The two angels continued toward Sodom while God and Abraham stopped to talk.

“If I find 50 innocent people in the city of Sodom, I will spare the whole place for their sake,” God said.

Abraham kept asking God whether he would spare the city if smaller and smaller numbers of innocent people were found.

God said he would not destroy the city even if only 10 innocent people were found.

1. Who were Abraham’s visitors?

TRIVIA: Who was sitting at the gate of Sodom when the angels came? (Hint: Genesis 19:1)

When God and his angels visited Abraham at the oak of Mamre, God gave Abraham some exciting news.

Abraham and Sarah were very old, and they were childless. As a matter of fact, Sarah was so advanced in years that she was well past childbearing age.

Even so, God told Abraham that Sarah was going to have a child.

“I will return to you about this time next year, and Sarah will then have a son,” God told Abraham.

Sarah was listening at the entrance of the tent. She heard what God said about her having a son.

She laughed to herself at the thought of becoming a mother at her age.

God knew what she was thinking.

“Why did Sarah laugh and say, ‘Will I really bear a child, old as I am?’” God asked Abraham. “Is anything too marvelous for the Lord to do? At the appointed time, about this time next year, I will return to you, and Sarah will have a son.”

Sarah became afraid, so she lied and said she did not laugh.

But God knew the truth.

SPOTLIGHT ON THE SAINTS:

Raimund Kolbe was born in Russian Poland in 1894. When he was ordained a Franciscan, he took the name Maximilian Mary.

In the 1920s, Maximilian reopened a ruined Polish friary and started a Marian press. He also was diagnosed with tuberculosis. Despite his illness, he took part in successful Marian missions to Japan and India, and he returned to Poland in 1936.

In 1939, Germany invaded Poland during World War II. Maximilian and four other Franciscans were arrested and sent to the Nazi death camp Auschwitz for criticizing the Germans. Maximilian volunteered for martyrdom at the camp, taking the place of a married man being executed by starvation.

Using the hints provided, fill in the blanks in the sentences about Abraham, Sarah and Lot.