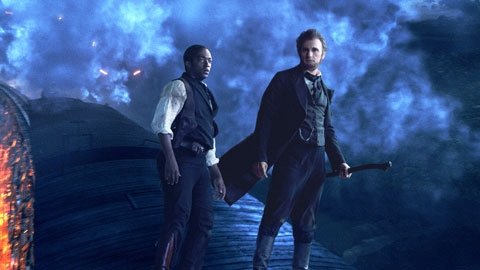 Directed by Timur Bekmambetov ("Wanted") from a screenplay by Seth Grahame-Smith (based on his 2010 novel), this goofy mash-up of American history is not for the squeamish, as the Great Emancipator — recast as our country’s first superhero — slashes his way toward truth, justice and the American way.

The narrative begins with the young Lincoln (Lux Haney-Jardine) in the shelter of his trademark log cabin, watching as his mother Nancy (Robin McLeavy) dies from a mysterious illness. Mummy was bitten — not by a deadly bug but by a vampire. (History is more prosaic, attributing Ma Lincoln’s demise to a malady called milk sickness.)

Years pass, and Lincoln (Benjamin Walker), consumed by a thirst for revenge, crosses paths with equally bloodsucker-averse mystery man Henry (Dominic Cooper). Henry becomes Abe’s mentor, training him in the art of vampire hunting. For the uninitiated, this involves a good deal of stabbing and shooting, as well as the lopping off of undead heads.

The most effective weapon, we are told, is silver. Ever since Judas betrayed Jesus for 30 pieces of it, the metal has been cursed. Lincoln’s ax is given a silver blade, and soon we’re on our way to Vampire Central: New Orleans.

According to Grahame-Smith’s back story, vampires have been around for some 5,000 years, wandering the earth in search of a place they can call home. Seems they’ve found one in the American South, where they own the plantations and keep the slaves. This gives Lincoln another motive for their eradication.

Not so fast, Henry tells his protege. "Real power comes not from hate but from truth," he says. "If vengeance is all you seek, you will never be able to save mankind. Fight this war with me, not for one man but for the whole world."

And so Lincoln puts his ax aside, takes up the law and enters politics. He vanquishes his rival, Stephen A. Douglas (Alan Tudyk), and steals the heart of Douglas’ fiancee, Mary Todd (Mary Elizabeth Winstead). Mary is a feisty lady and handy with a rifle. (The latter quality, at least, is presumably quite untrue to the real-life Mrs. Lincoln, who was the refined, if not always stable, scion of an aristocratic Kentucky clan).

Before long we’re in the White House, and the Civil War erupts. Adam (Rufus Sewell), the chief vein-drainer, strikes a deal with Confederate President Jefferson Davis (John Rothman) to defeat the Union Army at Gettysburg. Lincoln, however, has other ideas: He rearms himself, rounds up as much silver as he can, and faces his destiny.

The tone of "Abraham Lincoln: Vampire Hunter" is, for the most part, so serious that viewers ignorant of American history might easily be lulled into thinking this is how it all really happened, were it not for the occult overlay. A certain levity does creep in now and then, though — as when Mary calls to the president from her carriage window, "Hurry up, Abe, or we’ll be late for the theater."