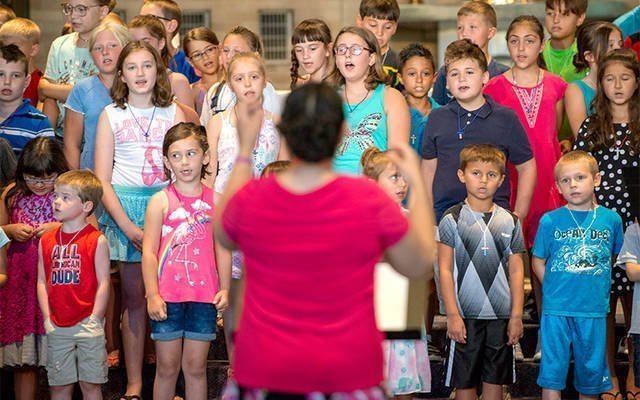 A volunteer music teacher leads a song during summer camp at St. Charles Borromeo, Greece, July 20. Volunteers working with children must undergo screening and safe-environment training, and abide by a code of conduct. (Courier photo by Jeff Witherow)

Nearly a decade before news reporting out of Boston focused public attention on cases of priestly sexual abuse nationwide, the Diocese of Rochester steadily had begun implementing measures to prevent sexual abuse of young people in parishes, schools and other settings.

A quarter century later, however, the potential for abuse continues to exist anywhere an adult and a minor may be alone, noted Karen Rinefierd, diocesan coordinator of safe-environment education and compliance. As she lauded the effectiveness of such diocesan measures as mandatory background checks, training sessions and signed codes of conduct for employees and volunteers, Rinefierd said the diocese can never rest on its laurels.

“Complacency is our biggest enemy,” she said. “If people get comfortable, thinking that there’s nothing going on and that it’s all in the past, we as a diocese could slip into not taking this (effort) seriously.”

Rinefierd noted that Bishop Salvatore R. Matano remains emphatic about maintaining a safe environment for his people, calling it “his highest priority.” Bishop Matano, who has led the diocese since 2014, affirms his ongoing commitment in a message that appears on the first page of the diocesan website’s safe-environment section (www.dor.org/protecting-our-children/protecting-our-children).

“As the shepherd of this diocese, I will continue to work unceasingly to ensure that our parishes, schools and every entity connected to our diocese are safe and holy environments for all,” the bishop stated in his message, noting that background checks and safe-environment training have been conducted for more than 25,000 workers and volunteers in the diocese since 2002.

All clerics, educators and employees serving the diocese and diocesan-affiliated agencies are required to submit to background checks and to undergo safe-environment training. The same stipulations are made of candidates for the priesthood and permanent diaconate, as well as thousands of people who volunteer to work with children, youths and vulnerable adults in such roles as catechists and youth-group assistants.

Employees and volunteers also are required to affirm in writing that they agree to abide by a diocesan code of conduct. The code, reinforced by safe-environment training, covers prohibitions against working alone with a child, youth or vulnerable adult, as well as one-on-one and/or inappropriate communication with minors or vulnerable adults, either in person or using electronic devices. The code also requires employees and volunteers to immediately report suspected sexual abuse to the proper supervisor.

According to Rinefierd, a total of 1,237 clergy, parish, school and Pastoral Center employees — as well as 8,270 parish and school volunteers — worked in the Rochester Diocese as of June 2017.

New employees and volunteers with the diocese, parishes, schools and diocesan affiliates — including privately run Catholic schools — must undergo background checks before beginning work. Immediately thereafter they also must complete safe-environment training and agree in writing to comply with codes of conduct.

Beginning in 2014, a Creating a Safe Environment (CASE) coordinator — usually an existing member of the staff — has been designated in every parish to ensure adherence to CASE standards. These appointments formalized longstanding lines of accountability at the parish level, Rinefierd noted.

Many of the local guidelines relate to the “Charter for the Protection of Children and Young People,” adopted in 2002 by the U.S. Conference of Catholic Bishops in response to cases of sexual abuse of minors by Catholic clergy. The charter — which the bishops updated in June (http://bit.ly/2LNMJr6) to tighten some requirements and clarify certain terms — set specific guidelines for responding to allegations of sexual abuse of minors, implementing safe-environment programs and developing codes of conduct. Also in 2002, the USCCB established a National Review Board to collaborate in these efforts.

Like every U.S. Catholic archdiocese and diocese — except for the Diocese of Lincoln, Neb., which has declined to participate — the Diocese of Rochester is monitored annually by independent auditors engaged by the USCCB to ensure that all aspects of the bishops’ charter are being followed. In addition, the USCCB engages a firm to conduct on-site audits of each diocese every three years; the next such audit of the Rochester Diocese is scheduled to take place in October 2018.

The Diocese of Rochester has been found to be in compliance every year since the annual audits began in 2003, and during the last on-site audit — conducted in September 2015 by the independent firm StoneBridge Business Partners — auditors praised the diocese for several new steps it had implemented. Among those measures were the appointment of parish CASE coordinators and requiring that employees and volunteers every three years renew their CASE training, background checks and promises to comply with codes of conduct.

“Our diocese goes beyond what the (USCCB) charter requires,” Rinefierd observed.

As a new school year is about to begin, many new teachers and volunteers are being screened and trained in safe-environment procedures, noted Anthony S. Cook III, diocesan schools superintendent.

“I just think it’s important that people who interact with our schools know we do encourage volunteerism and a family environment, but still require this (safe-environment) training,” Cook said. He added that the training covers such aspects as reminding adults to always work with children in areas where other students and/or adults are present, and to keep windowless doors open at all times.

Efforts by the Diocese of Rochester to prevent sexual abuse of minors predated the U.S. bishops’ charter by several years. In 1993, then-Bishop Matthew H. Clark established an independent local review board made up of experts in child protection, law enforcement and mental health. That board continues today, assisting with policy development, the assessment of sexual-abuse complaints and development of services to victims.

Also in 1993, victim advocates were appointed and training of diocesan employees began.

Shortly after the USCCB charter was enacted in 2002, additional measures were added locally, such as heightened screening of men applying for priestly and diaconal formation; implementation of background checks on employees and volunteers; development of a code of conduct; and required training for volunteers working with children, teens and vulnerable adults.

Rinefierd said all these efforts are geared toward further increasing awareness and prevention of sexual abuse, not only in the Catholic Church but in the broader society as well.

Although the sexual-abuse crisis in the U.S. initially centered on Catholic priests and Scout leaders, Rinefierd noted that it has proven to extend much further, pointing to recent scandals in the athletic programs at Penn State, Ohio State and Michigan State universities as examples.

“This is happening in a wide variety of situations, and we need to pay attention the best we can,” Rinefierd said.

While acknowledging that the priestly sexual-abuse crisis “was a profound, horrible thing that’s happened in the church,” Rinefierd expressed hope that the Rochester Diocese’s efforts over these last 25 years can help strengthen safe-environment practices in a variety of settings.

“We want people to take what they learn in our training and apply them in all aspects of their lives,” she said.

EDITOR’S NOTE: Any victim of sexual abuse by clergy or other church personnel is encouraged to contact civil authorities. To receive help and guidance from the Roman Catholic Diocese of Rochester, contact Deborah Housel, victim assistance coordinator, at 585-328-3210, ext. 1555, or toll-free 1-800-388-7177, ext. 1555, or by e-mail to victimsassistance@dor.org.