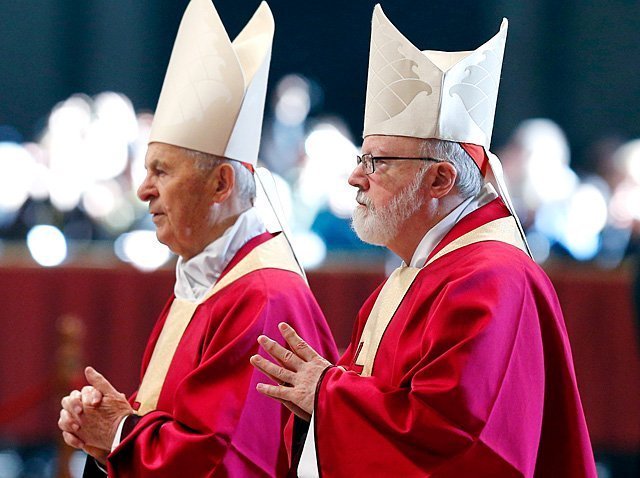 Cardinal Sean P. O'Malley (right), president of the Pontifical Commission for the Protection of Minors, says bishops who do not comply with the child protection norms must face real consequences.

VATICAN CITY (CNS) — Bishops who do not comply with the child protection norms adopted by their bishops’ conferences and approved by the Vatican must face real consequences, said Cardinal Sean P. O’Malley of Boston, president of the Pontifical Commission for the Protection of Minors.

The commission, he said, "is very, very concerned about this whole area of (bishops’) accountability" and has a working group drawing up recommendations for Pope Francis.

The proposed new norms, the cardinal told reporters at the Vatican Feb. 7, "would allow the church to respond in an expeditious way when a bishop has not fulfilled his obligations."

"We think we have come up with some very practical recommendations that would help to remedy the situation that is such a source of anxiety to everybody" on the pontifical commission, he said. The recommendations will be presented to Pope Francis.

The cardinal and members of the commission, which includes survivors of clerical sex abuse, spoke to reporters at the end of their Feb. 6-8 meeting at the Vatican.

Peter Saunders, a survivor and commission member, said, "Bishop accountability is most definitely something that is a concern and central to some of the work that is going to be carried out by the commission."

Saunders, who is from London, said he knows the Vatican and the church at large "operate in a slightly different time dimension" where the definition of "quick" may be months or years. "I get that," Saunders said, "but when it comes to time, children only get one stab at childhood."

Jesuit Father Hans Zollner, a psychologist and member of the commission, said, "as far as we know," the number of bishops who have not followed their conference’s child-protection norms is not large, "but it is certainly a huge problem in terms of publicity and in terms of the authenticity of the church. If you have bishops who do not comply with the church’s own norms, we have a problem."

Currently, he said, even though bishops are part of a bishops’ conference, they are accountable only to the pope and there is no procedure for investigating the way a bishop complies with the norms and nothing that spells out the consequences of noncompliance.

"Until now every bishop has been a little pope" in his diocese and "can do whatever he wants" with regard to national guidelines, Father Zollner said. "Only the pope has authority over him."

Saunders told reporters that if in the next year there is not "firm action" on accountability and the implementation of child-protection policies around the world, he would leave the commission. Marie Collins, an Irish survivor of clerical abuse, who was appointed to the commission about eight months before Saunders, told reporters she also would leave if no progress is seen soon.

"We’re not here for lip service," Saunders said, but to protect children.

After the meeting, the commission issued a statement reiterating that "the commission is keenly aware that the issue of accountability is of major importance" and that members "agreed on an initial proposal to submit to Pope Francis for consideration."

"Moreover the commission is developing processes to ensure accountability for everyone in the church — clergy, religious and laity — who work with minors," said the statement published Feb. 9.

Cardinal O’Malley said 96 percent of the world’s bishops’ conferences have sent the Vatican their child-protection norms, as requested in 2011 by the Congregation for the Doctrine of the Faith. Some of the norms are "weak," he said, and the commission will work with those countries and countries without norms to bring them to full compliance.

Father Zollner said only five of the world’s 112 bishops’ conferences have not submitted norms. All five are in French-speaking West Africa and are facing the challenges of civil strife, the Ebola epidemic, poverty and a lack of people familiar with both canon and civil law, something necessary for drawing up effective guidelines.

Cardinal O’Malley publicly thanked Pope Francis for a letter, released Feb. 5, insisting that the protection of children — and not the avoidance of scandal or bad publicity — must be the priority for the way all bishops deal with accusations of sex abuse by church personnel.

The pope’s letter also encouraged bishops to meet with and listen to survivors, which is something Cardinal O’Malley said "many bishops have not yet done."

Saunders told reporters, "There are far too many bishops around the world who have refused to meet with survivors."

If a victim of clerical sexual abuse feels able, he said, the first thing he or she should do is report the crime to police "because we know there is an abysmal record" of "ill-judged responses" from bishops and priests.

Cardinal O’Malley said the commission also has set up working groups to design child protection workshops for members of the Roman Curia and for the courses for newly appointed bishops that the Vatican runs each September.

"The commission is also preparing materials for a Day of Prayer for all those who have been harmed by sexual abuse," he said, which "underscores our responsibility to work for spiritual healing and also helps raise consciousness among the Catholic community about the scourge of child abuse."

In addition, he said, commission members are contacting Catholic funding organizations "to ask them to include some requirements concerning child protection in their guidelines for eligibility for funding" and to consider giving poorer countries grants to establish child protection programs.

Contributing to this story was Francis X. Rocca.