Across the Divide - Catholic Courier 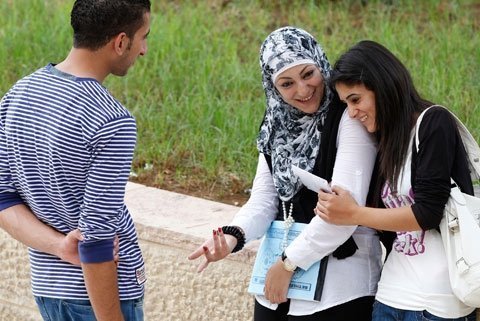 Bethlehem University students socialize on the West Bank campus in this 2010 file photo. The Canadian documentary “Across the Divide” presents a profile of the university, and shows how the lives of those associated with it have been affected by the struggle swirling around them.

NEW YORK (CNS) — Few conflicts in the modern era have proved as intractable as that pitting Israelis against Palestinians. One institution caught up in this clash has been the Holy Land’s Bethlehem University, a Catholic establishment open to students of all faiths.

The intriguing Canadian documentary "Across the Divide" (Salt + Light) presents a profile of the university, and shows how the lives of those associated with it have been affected by the struggle swirling around them.

Founded in 1973 with the direct, personal involvement of Pope Paul VI, and staffed by the Christian Brothers, Bethlehem University was the first seat of higher learning to be established on the West Bank. But its operations, we learn, have had to be suspended for long periods of time at the behest of the Israeli government.

And the proximity of armed conflict has not only taken its toll on the physical structures of the university’s campus, but exacted casualties among its scholars as well.

Filmmakers Kris Dmytrenko (who also narrates) and Richard Valenti offer insights into the larger cultural and political situation through a handful of personal stories. The most prominent of these concerns Bethlehem University student, and Gaza Strip resident, Berlanty Azzam.

Since Palestinians require Israeli government permission to travel between the two separate areas of Palestine — the Hamas-controlled Gaza Strip and the Fatah-ruled West Bank — Israeli authorities arrested Azzam, who had not obtained the necessary permit, at a security checkpoint. They then deported her to her home territory and forbade her return to Bethlehem. This, despite the fact that Azzam had nearly completed her studies.

The film follows Azzam’s increasingly desperate legal battle to have this ruling overturned lest she be deprived of her all-important degree.

Another student describes the tragic fate that befell her family when they found themselves in the wrong place at the wrong moment and were mistaken for terrorists by Israeli soldiers. Her ultimate response to this wrenching misfortune, however, strikes a hopeful note and provides an uplifting example of Christian witness.

Scenes of real-life violence and potentially upsetting subject matter preclude endorsement for children, who are obviously unlikely to be interested anyway. But this otherwise unobjectionable study presents a valuable and enlightening educational opportunity for teens and their elders.

Screenings of "Across the Divide," which had its premiere in Vancouver, British Columbia, June 3, have been scheduled for Toronto Sept. 5 and Ottawa, Ontario, Sept. 19. The date for a showing in Windsor, Ontario, has yet to be scheduled. U.S. screenings are planned for the near future. For more information, go to http://saltandlighttv.org/acrossthedivide/.

The Catholic News Service classification is A-II — adults and adolescents. Not rated by the Motion Picture Association of America.