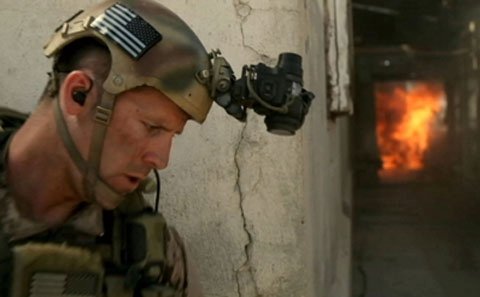 NEW YORK (CNS) — As explained in an unusual prelude featuring its co-directors Mike “Mouse” McCoy and Scott Waugh, the earnest but graphically violent action film “Act of Valor” (Relativity) employs real-life, necessarily anonymous members of the Navy’s elite SEAL unit to tell a fictional story dramatizing their off-screen work. The aesthetic results are, perhaps, predictable.
¬†
When enacting the kind of combat operation at which they excel, the SEALs — their moniker is an acronym for Sea, Air and Land teams — are as convincing as one might expect. And their imaginary exploits are ably packaged by McCoy and Waugh.
¬†
But these suspenseful sequences are interspersed with a narrative maladroitly ramming home macho values as well as by the kind of banter that may build barracks camaraderie but does little to entertain moviegoers. As for the bloodletting toward which such scenes all too often lead up, it’s portrayed unsparingly, limiting appropriate viewership to a minority of adults.
¬†
The plot is serviceable enough: We follow along as the SEALs’ rescue of a kidnapped CIA operative (Roselyn Sanchez) reveals a terrorist plot to smuggle advanced explosives across the Mexican border. But the violence bar is further raised as the agent’s captivity sees her subjected to a prolonged beating and the torturous application of a power drill to extract information.
¬†
Throw in another early scene where a crowd of carefree schoolchildren become collateral damage in the assassination of an American diplomat, and the cumulative effect is gratitude to the commandoes for the duties they perform, mingled with an uncomfortable sense that there’s more than one reason for their operations to remain secret.
¬†
The film contains pervasive, often gory violence, including torture, a couple of uses of profanity, and about a dozen instances each of rough and crude language. The Catholic News Service classification is L — limited adult audience, films whose problematic content many adults would find troubling. The Motion Picture Association of America rating is R — restricted. Under 17 requires accompanying parent or adult guardian.
¬†
– – –
¬†
Mulderig is on the staff of Catholic News Service.