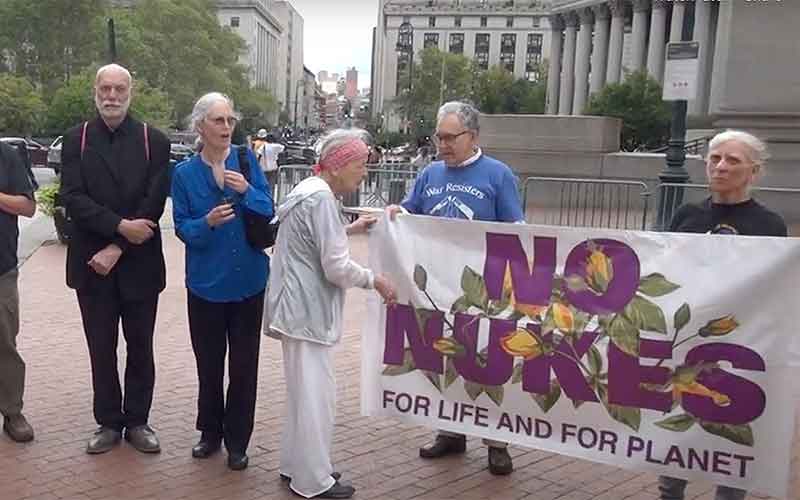 This is a screen grab of peace activists in New York City Aug. 22, 2022, after a court appearance. They were arrested Aug. 2 on charges of disorderly conduct for blocking the door of the U.S. Mission to the United Nations. The activists' civil disobedience action came as diplomats met at the U.N. for a review conference on the Treaty on the Non-Proliferation of Nuclear Weapons. (CNS screen grab by Peace Action New York State)

The activists blocked the door in an act of civil disobedience in front of the mission in New York while diplomats from around the world gathered for a U.N. review conference on the Treaty on the Non-Proliferation of Nuclear Weapons.

The court gave the 11 arrestees “adjournment in contemplation of dismissal,” or ACDs, telling them that if they are not rearrested over the next six months, the disorderly conduct charges will be dropped and the records of the charges will be cleared. There were no fines issued.

In a statement, Breitbart, a longtime peace activist who is involved with NYC War Resisters League, criticized the lack of media coverage of the 11 activists’ civil disobedience, arrest and appearance in court.

“In 1982, the world’s attention was focused on the hair trigger danger of the possibility of unimaginable destruction,” he said. “So here we are today, 40 years later, people have come to accept nuclear weapons as just matters of fact. Thousands of disaster movies later, people have grown accustomed to experiencing horror as a popular form of entertainment.”

“The Department of War is now known as the Department of Defense,” he continued, “and its publicists devote much effort to hiding the truth of what it does while it soothes the public into accepting the logic and the expense of the people’s war machine.”

“Now 11 people have been arrested blocking the door of the U.S. Mission to the U.N. and their action has received almost no attention, even from progressive media outlets,” Breitbart said.

He criticized the U.S. media for talking about former President Donald Trump’s “big lie about him winning the election. But we need to remind people of a greater untruth. The big lie of militarism and of the continuing nuclear arms race has two parts: one, that nuclear weapons offer safety and two, that guns provide freedom.”

He said that “such lies need to be challenged and resisted with the power of nonviolence. Militarism is the biggest lie and all of us need to stop it.”

At a news conference after their court appearance, the 11 activists noted that the Aug. 2 protest included some activists who participated in what they said was the largest anti-nuclear march in U.S. June 12, 1982.

“These activists gathered again in Manhattan, more than 40 years later, to renew their call for an end to nuclear weapons and the threat of nuclear war,” said a statement from the group.

They said calls by the U.S. and Ukraine for Russia to return the Zaporizhzhia Nuclear Plant to Ukraine and Russia’s refusal to create a demilitarized zone around the plant “has heightened concern about an imminent nuclear disaster worse than Chernobyl.”

The Chernobyl disaster happened in 1986 near the city of Pripyat in the north of Ukraine when it was part of the Soviet Union.

The activists demanded that the United States “initiate a global nuclear disarmament race,” since the U.S. “initiated the nuclear arms race in 1945 and is the only country to have used nuclear weapons in war.”

Actions they said the U.S. should take include: stopping the proliferation of nuclear weapons by dismantling nuclear reactors; redirecting resources from the military “to meet human needs and repair the planet”; ending military interventions in other countries; disarming unilaterally, starting with nuclear weapons; and signing, ratifying and implementing the U.N. Treaty on the Prohibition of Nuclear Weapons.