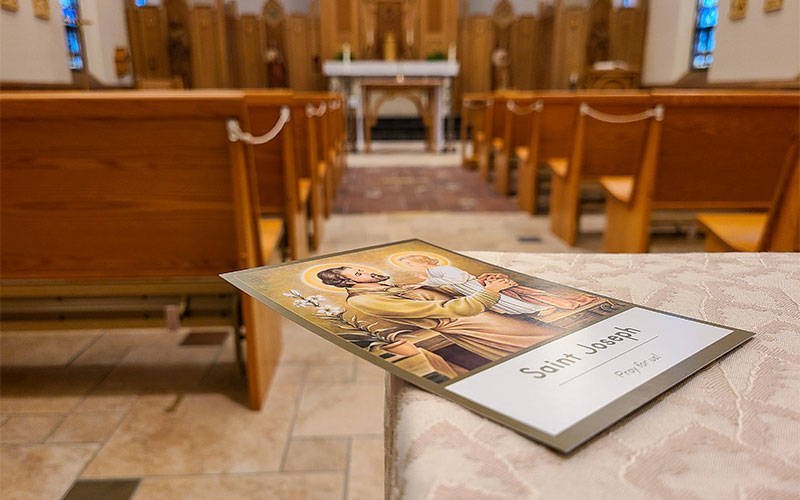 A prayer card for St. Joseph is seen at the Diocese of Rochester’s Pastoral Center in Gates. (Courier photo by Jeff Witherow)

A number of events and initiatives are being conducted in the Diocese of Rochester to denote the Year of St. Joseph as declared by Pope Francis, along with the saint’s feast day March 19.

Among the scheduled activities:

• The cluster of Holy Spirit/St. Joseph in Penfield is conducting a virtual 33-day Lenten program for those wishing to be consecrated to St. Joseph. The program includes brief daily readings and video reflections from Father Donald Calloway’s Consecration to St. Joseph: The Wonders of Our Spiritual Father. A study of Pope Francis’ apostolic letter on St. Joseph, Patris Corde, is also taking place. In addition, Bishop Salvatore R. Matano will celebrate Mass at St. Joseph Church, 43 Gebhardt Road, on the feast of St. Joseph at 9 a.m. And a display will be featured March 19-22 in the Holy Spirit hall with statues, paintings, prayers and other artwork inspired by St. Joseph.

• A group of men from St. Peter Parish in Shortsville, Phelps and Clifton Springs is reading Consecration to St. Joseph: The Wonders of Our Spiritual Father and will be consecrated to St. Joseph during a March 19 Mass. Members of the men’s group, which is being led by Deacon Bob Cyrana and parishioner Brian Moser, meet once a week either at the parish center or via Zoom to discuss the week’s readings.

• A special evening prayer in honor of St. Joseph will take place March 18 at 7 p.m. at Church of the Transfiguration, 50 W. Bloomfield Road, Pittsford. Included in the event will be an illustrated reflection on the saint by Joseph Kelly, a noted professor from Nazareth College and St. Bernard’s School of Theology and Ministry. All are invited to attend. A face mask and check-in process will be required of each attendee.

• St. Louis Parish in Pittsford is currently offering a series of talks for the Year of St. Joseph. The series will conclude on March 19 at 7 p.m. with a feast of St. Joseph liturgy at St. Louis, 50 S. Main St. Serving as celebrant will be Father Mitchell Zygadlo, pastor of St. Louis.

• In Tioga County, Father Jeffrey Galens, pastor, will consecrate Blessed Trinity and St. Patrick parishes to St. Joseph on the saint’s feast day. Following consecration of the parish, a personal consecration will be recited for those who wish to consecrate themselves or renew their consecration.

• Immaculate Conception Parish in Ithaca is asking parishioners to pray the St. Joseph Novena, with booklets being made available at the parish office. The parish also is offering copies of Consecration to St. Joseph: The Wonders of Our Spiritual Father for those seeking a more in-depth study, as well as seven-day St. Joseph candles.

• Students at the Diocese of Rochester’s Catholic elementary and middle schools began reciting the “St. Joseph Prayer for Children” in early February during Catholic Schools Week and will continue to do so each school day through the spring, according to James Tauzel, diocesan superintendent of Catholic schools. Diocesan staff drew from several different resources to research and draft the prayer, which was approved by Bishop Matano. Staff of the diocesan Catholic Schools Office also is preparing additional resources for schools and families to use this spring, especially around St. Joseph’s March 19 feast day as well as Father’s Day in June.

• The Sisters of St. Joseph of Rochester offered women between the ages of 18 and 35 the opportunity to participate in a Feb. 20 virtual retreat. “Listening to God in Times of Chaos” was planned in honor of the Year of St. Joseph and was meant to help women emulate and learn more about the qualities of St. Joseph.

• A permanent home has been made for a statue of St. Joseph at Sacred Heart Church in Auburn. The statue first went up in December to begin the Year of St. Joseph.

• At St. Michael Church in Newark, the statue of St. Joseph that stood for many years in the former St. Michael School is now displayed in the church’s gathering space. In addition, families will receive loaves of St. Joseph’s bread after Masses on March 14.

• In honor of St. Joseph’s Day, Brockport’s Nativity of the Blessed Virgin Mary Parish is collecting food March 12-21 to be donated to St. Joseph’s House of Hospitality.

• In Elmira’s Parish of the Most Holy Name of Jesus, a holy hour paying tribute to St. Joseph will take place March 14 at 2 p.m. at St. Mary Southside Church, 224 Franklin St. Deacon Joe Erway will lead the service and give a meditation on the life of St. Joseph.

•At St. John the Evangelist in Greece, a display honoring St. Joseph will be set up in the church sanctuary during weekend Masses March 20-21. Each family attending Mass will receive a bag with St. Joseph’s bread, orange, fava bean and prayer card.

• A parish consecration to St. Joseph will take place at St. Leo Church in Hilton March 19.