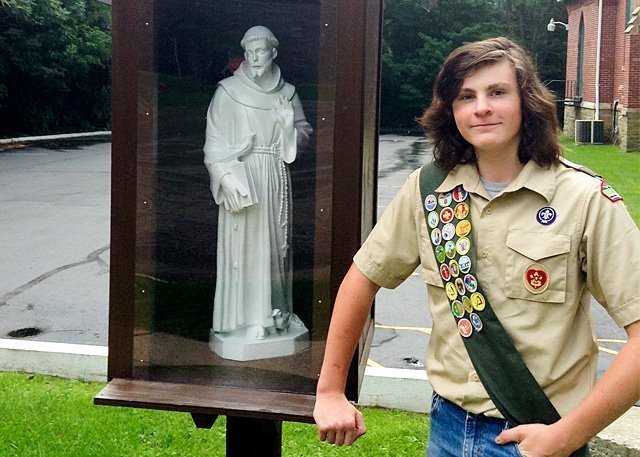 By combining his Catholic faith with a passion for handiwork, Billy Meyer has devised an admirable way to fulfill his Eagle Scout service requirement.

The result will benefit fellow worshipers for many years to come at Addison’s St. Catherine of Siena Church, located in south central Steuben County.

Billy has erected a shrine area outside the church that features a statue of St. Francis of Assisi. Construction was completed in late August, with the shrine due to be dedicated in conjunction with the Feast of St. Francis on Oct. 4.

"It’s a great project and it was a good experience. It’s great to do something for the church," said Billy, 15.

He began working on the shrine in 2015, overseeing much of the construction and design. The work involved putting up a wooden hutch, pole and brace for the statue, then securing in place a three-foot fiberglass figure of St. Francis that was made in Italy and given by an anonymous donor.

Billy received valuable assistance for his Eagle project from Dick Knowles, a St. Catherine parishioner who obtained a permit to dig at the statue site and also helped with digging and the pouring of concrete; his grandfather, David Salley, who lives across the road from him; and fellow members of Boy Scout Troop 2 based at Christ Episcopal Church in Corning.

Much of the shrine’s construction occurred during the afternoon hours of an unusually hot summer.

"Pretty much every day we’ve been up there to work, it has been a blistering hot day," Billy acknowledged.

He noted that the project took longer than originally anticipated, as it was put on hold following the unexpected collapse of St. Catherine’s ceiling last year. Repairs were made to the church during the fall and winter, and the shrine effort resumed this past spring. The statue was installed during the summer, and the initiative’s final segment — addition of protective plexiglass — took place Aug. 23.

"I feel good; it’s nice to have it done. It’s been a long project with a lot of bumpy roads," remarked Billy, a lifelong parishioner of St. Catherine. His family resides in the town of Erwin, between Corning and the village of Addison, where St. Catherine Church is located.

A portion of the shrine design was derived from a similar Eagle Scout project completed in 2012 by Ethan Luta at St. Stanislaus Church in Bradford. Ethan, a Scout from Troop 45 in Bradford, belongs to Ss. Isidore and Maria Torribia Parish, which comprises St. Stanislaus, St. Catherine and St. Joseph in Campbell.

St. Catherine’s shrine dedication in early October was to be combined with the church’s pet blessing that annually takes place near the feast day of St. Francis of Assisi. The renowned 13th-century saint is the patron of animals as well as ecology.

Father Patrick Connor, pastor of Ss. Isidore and Maria Torribia, noted that in addition to honoring St. Francis, the shrine serves to pay homage to "all those who have died in the line of duty, either in the armed forces, law enforcement, or fire and rescue services, and all who are instruments of peace."

With his project now completed, Billy looks forward to receiving his Eagle Scout award at some point next year. In the meantime, each time he visits St. Catherine Church to attend Mass, he can pause to admire the shrine that grew out of his inspiration. .

"It’s right by the parking lot, and people can go out and pray by it," Billy said, adding that "at the church there are no other (outdoor) statues. So, it’s really nice. It adds to the effect and everything."