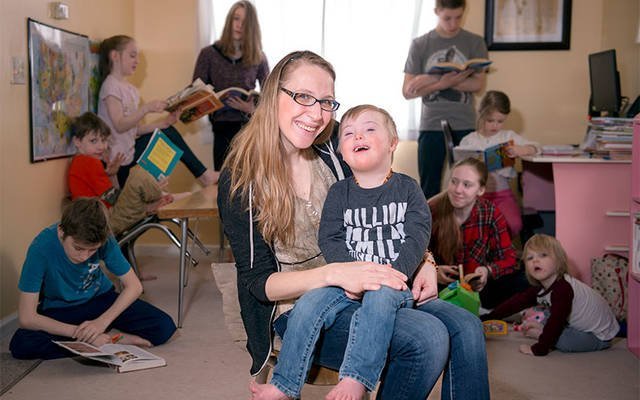 Margaret Black holds her son, Sebastian, while surrounded by her other eight children at their home in Addison. 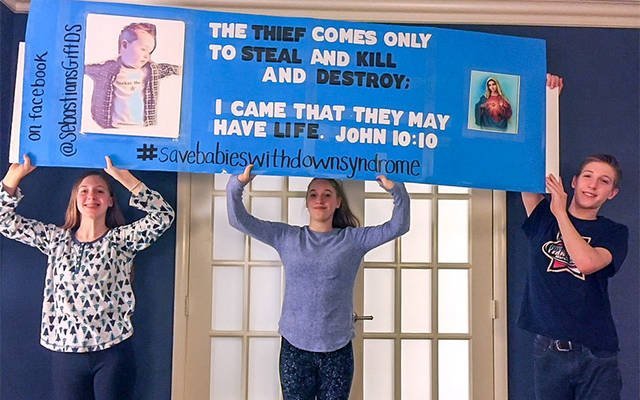 Sebastian Black’s older siblings, Genevieve (from left), Camille and Thad, hold up the sign they carried during January’s March for Life rally in Washington, D.C.

ADDISON — With his mom and all eight brothers and sisters at home on a recent Friday afternoon, Sebastian Black had many willing participants for one of his favorite activities — fist-bumping. According to Sebastian’s oldest sibling, Genevieve, the 4-year-old also enjoys mingling with fellow worshipers at St. Catherine of Siena Church.

There appears to be no shortage of love and affection for Sebastian, who was born with Down syndrome. Yet his mother, Margaret, asserts that many babies with Sebastian’s diagnosis never revel in such pleasures because they’re aborted.

According to a March 5 article in The Washington Post, several states are heatedly debating the legality of abortions in known cases of Down syndrome after prenatal testing. The article also noted that in many countries, a large majority of unborn babies detected with the condition are aborted.

That’s a trend that Margaret Black is trying to change — through her promotion of Sebastian as well as a recent effort benefiting another child with Down syndrome.

This past Jan. 19, Black and three of her children traveled to Washington, D.C., for the March for Life, which annually protests the legalization of abortion in the United States. There, they carried signs bearing Sebastian’s image and sold similarly designed T-shirts to promote the sanctity of life for people with Down syndrome, a genetic disorder marked by intellectual and developmental delays.

Shirt proceeds were earmarked for the Down Syndrome Information Network of the Twin Tiers, to which Black belongs. All the money ended up going to one family after Black learned of a single mother from that support group, Lyssa Gregg, whose 2-year-old daughter, Lilly, had recently been diagnosed with leukemia. The Blacks raised additional funds by selling more shirts at St. Catherine of Siena Church, where parishioners made donations far exceeding the shirts’ asking price.

“(Parishioners) came to the back of church and started handing me money. They could relate, because they know Sebastian,” Black said. “It blew my mind. I came home and started counting the money, and just started crying.”

A total of $1,435 was raised for the Greggs. On Feb. 9 Black walked into their Elmira home and handed Lyssa Gregg the money, in an emotional first-time meeting between the two mothers of Down syndrome kids.

Sebastian is the eighth of nine children ranging in age from 2 to 17 for Black and her husband, Maynard; they are expecting a 10th child this coming October. She did not undergo prenatal testing for Sebastian but, being staunchly pro-life, says she would have kept him even if she’d known his condition while pregnant.

He was born on Nov. 20, 2013, but had trouble breathing and exhibited characteristics of Down syndrome. “I was kind of freaking out — ‘My life is going to change, I’m not going to be able to homeschool any more,’” recalled Black, who homeschools her other children. “I had a whole storm of questions and fear, but my first thought was, ‘I need to turn to the Lord.’ I just said ‘Lord, talk to me, tell me something.’ It was a very strong, profound sensation that went through my chest, and I took that to be the Holy Spirit.”

Sebastian finally came home after 21 days in neonatal intensive care. By then, Black said, she had decided that “through this child, there was going to be glory coming back to God,” which she has done in part by spreading Sebastian’s story through creation of a Facebook fan page. Sebastian is featured in several portions of the March for Life Instagram page as well.

Black said that through her activism, she seeks to alter perceptions in both the medical field and general public that the lives of people with Down syndrome are not worth living. Her efforts affirm unborn babies with Down syndrome as well as those born with the condition.

“Being pro-life isn’t just being pro-birth,” explained Black, who is the sister of Joseph Martuscello, Sebastian’s godfather and a seminarian for the Diocese of Rochester.

Meanwhile, Sebastian continues to thrive both at home — “my kids are so welcoming and accepting,” Black said — and at St. Catherine of Siena, a faith community of Ss. Isidore and Maria Torribia Parish in central Steuben County.

“One of the things he loves to do at church is walk up during Communion, hold his hands together and get his blessing (from the priest),” his mother said.

She added that Sebastian — who attends the Valley Early Childhood School in nearby Cameron Mills — is happily progressing through his young life despite the challenges he has experienced.