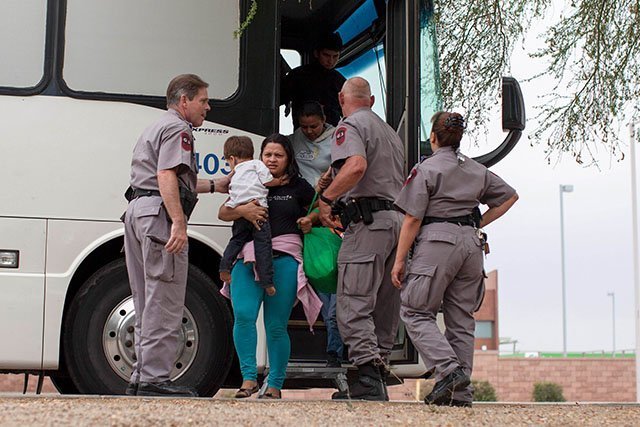 Migrants, consisting of mostly women and children, disembark from a U.S. Immigration and Customs Enforcement bus at a bus station in Phoenix May 29. Latin American and U.S. Catholic leaders are calling for greater protections for migrants, especially because of the record number of minors making the trip from Central America to the U.S. alone.

WASHINGTON (CNS) — As Vice President Joe Biden was conferring with Central American presidents about a surge of children arriving at the U.S. border without a parent, other administration officials were outlining steps to try to keep more people from attempting the dangerous, illegal trek.

By June 20, 18 days after the Obama administration announced first steps to address a "crisis" of unaccompanied minors swarming primarily into the Rio Grande Valley in Texas, the number of such children apprehended had grown by 5,000.

Meanwhile, some spokesmen for human services agencies and advocates for immigrants have begun talking about the problem as a refugee situation, not an immigration issue.

Wendy Young, president of Kids in Need of Defense, said in a June 19 teleconference that the factors pushing families in Guatemala, El Salvador and Honduras to send minors to the United States on their own have made the situation "refugee-like, with a layer of child-protection issues."

The U.N. High Commissioner for Refugees describes refugees as those who "have to move if they are to save their lives or preserve their freedom." Under U.S. and international law, refugees are entitled to different sorts of protections and assistance than other kinds of immigrants.

The Obama administration June 20 announced more than $250 million in new and ongoing funding for programs in the "sending" countries, including assistance with reintegrating deportees, combatting crime and gang violence and providing job training and other incentives to stay at home. Other measures announced included: campaigns in Central America to counter "misinformation" fostered by human smugglers about what happens to children who are detained, and shifting immigration judges and other staff within the Department of Homeland Security to help process the cases more quickly.

On June 2, the administration said 47,017 such children had been apprehended since the start of the fiscal year in October, and the Federal Emergency Management Agency would manage the "crisis." On June 20, Alejandro Mayorkas, deputy secretary of the Department of Homeland Security, said 5,000 additional minors unaccompanied by a parent had been detained; he said there had been 39,000 adults with children detained through the end of May.

As recently as 2011, an average of 6,000-7,000 such minors a year were detained by the Border Patrol. The rapid uptick has overwhelmed the system for keeping the children in safe conditions while efforts are made to unite them with responsible family members or place them in suitable foster care. Deportation proceedings continue simultaneously.

Mayorkas also discussed his agency’s efforts to arrange places to house the families and unaccompanied children. Under federal law, unaccompanied minors are supposed to be detained by Immigration and Customs Enforcement no longer than 72 hours before being moved to the care of a relative or an appropriate shelter or foster care, under the authority of the Office of Refugee Resettlement in the Department of Health and Human Services.

But the existing system has been unable to handle the vast numbers recently apprehended.

Parents with children have been sent to cities, including Phoenix and Tucson, Arizona, given orders to appear in immigration court and left at bus stations.

Thousands have been sent to warehouses maintained by the Border Patrol in Arizona and Texas. Reporters admitted to the Border Patrol temporary shelters in mid-June came away with stories and photos of children sleeping on bare floors and metal benches inside large chain-link cages with no indoor toilets, no showers or laundry facilities and few age-appropriate activities.

In areas where the detainees are being held, community organizations and churches have been working with the federal agencies to try to improve the accommodations.

Michelle Brane, director of Migrant Rights and Justice for the Women’s Refugee Commission, said in the June 19 teleconference that while "bottlenecks" in the system for caring for the children led to situations that "everyone agrees are bad," now people with better expertise in caring for children are getting involved.

She described the temporary system as "being run as you would imagine a hurricane emergency" shelter.

"The administration is working hard to reinstate order to the process," she said. But she also cautioned that the process needs to proceed carefully. "They need to be extra cautious. This is a very vulnerable group of children."

Although House Speaker John Boehner, R-Ohio, suggested June 20 that the National Guard ought to be deployed at the border, Mayorkas said border enforcement is a civilian matter that is being handled by the Border Patrol.

"Border enforcement has never been stronger," she said. "Nearly all are already being being caught or turning themselves in."