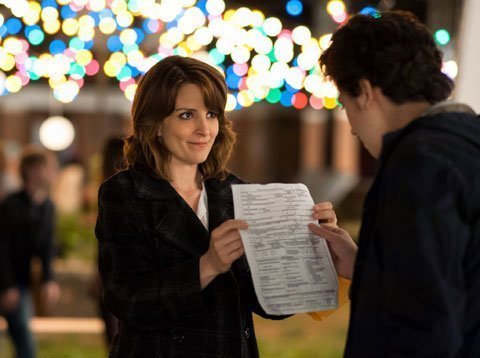 NEW YORK (CNS) — The hallowed halls of Princeton University provide the setting for much of the low-key romantic comedy "Admission" (Focus).

While knowledge may abound on that institution’s real-life campus, wisdom seems to be in short supply around its fictional counterpart, at least if the life of this slow-paced film’s heroine is any gauge.

Tina Fey plays Princeton admissions officer Portia Nathan. Buttoned-down Portia’s career is flourishing — so much so that she hopes to beat out office rival Corinne (Gloria Reuben) when the time comes to replace their soon-to-be-retired boss Clarence (Wallace Shawn).

Portia’s personal affairs, however, are a different matter. She’s long been at odds with her free spirited, fiercely feminist mom Susannah (Lily Tomlin). And her relationship with live-in boyfriend Mark (Michael Sheen), an English professor, is clearly on the skids even before he announces that he’s leaving her for a faculty colleague.

So, when a recruiting trip brings Portia to the experimental school where idealistic teacher John Pressman (Paul Rudd) presides, there’s not much to keep the pair from falling for each other. John’s original motive for arranging Portia’s visit, though, was to introduce her to one of his most brilliant students, Jeremiah (Nat Wolff) — and not just because he believes Jeremiah would be a good fit for Princeton.

John and Portia, it seems, were friends-of-friends at their alma mater, Dartmouth, and John is in on a secret: While an undergraduate, Portia became pregnant and gave her baby up for adoption. Based on the particulars of Jeremiah’s birth certificate, John believes the learned lad is Portia’s long-lost son.

John’s news throws kid-averse, job-focused Portia into an emotional tailspin as she tries to decide whether to let Jeremiah know that she’s his birth mother — and thereby let him into her life. What she’s not at all doubtful about from the start is that she is going to get him into Princeton, despite the fact that Jeremiah is mostly self-taught and has a string of bad grades running across his record.

Even as her bond with John becomes physical, Portia’s inadmissible moral choices extend from the bedroom — where Susannah, as a subplot shows us, also proves all-too-fallible — to the office. She moves heaven and earth to land Jeremiah a coveted place among the Tigers. Her obvious conflict of interest in the case gives her not a moment’s pause — and slows her efforts on Jeremiah’s behalf not at all. Eventually, Portia even resorts to fraud.

Thus, while director Paul Weitz’s adaptation of Jean Hanff Korelitz’s novel starts with a premise that’s at least implicitly pro-life, and moves toward a wrap-up that’s largely pro-family, what transpires in between needs to be viewed with mature discrimination.

The film contains acceptance of cohabitation and of premarital sexual encounters, a benign view of unethical behavior, about a half-dozen uses of profanity, a couple of rough terms and occasional crude language. The Catholic News Service classification is L — limited adult audience, films whose problematic content many adults would find troubling. The Motion Picture Association of America rating is PG-13 — parents strongly cautioned. Some material may be inappropriate for children under 13.