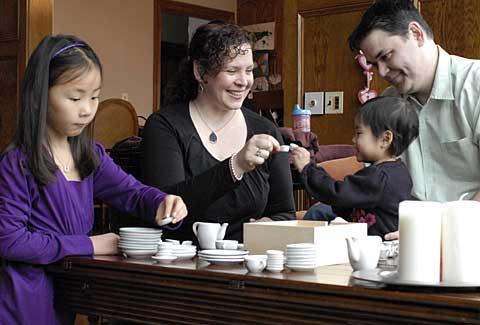 Marybeth O'Connor and her husband Noel have a tea party with their adopted daughters, 7-year-old Paige (left) and 2-year-old Eve, at their Pittsford home Jan. 24.

Kathryn Young’s phone began to ring off the hook as news reports began to filter out in the chaos following the 7.0-magnitude earthquake that devastated Port au Prince, the capital of Haiti.

"I was getting calls every 10 minutes from people wanting to adopt from Haiti," said Young, an adoption social worker for Catholic Family Center in Rochester.

Young noted that it will be at least two years before local families could be cleared to adopt Haitian children orphaned during the earthquake. Among the steps in the process, the child must be verified to be an orphan, no other kin may be found to care for the child and families need to go through the normal scrutiny before they are cleared to adopt.

Although news media widely reported the arrival of Haitian orphans in the United States so that they could be placed with adoptive families, Young pointed out that these orphans’ adoptions had been in process long before the earthquake and were expedited in its aftermath.

"These kids were already matched up with families," Young said.

In the wake of high interest in adoptions, Young said she hopes families will consider adopting from other countries. Catholic Family Center helps facilitate local paperwork prior to international adoptions and also offers aid in the adoption of older or special-needs children, private adoptions and domestic infant adoptions.

The process begins with a phone call to Catholic Family Center at 585-546-7220, ext. 4846. Families can alternately attend a monthly informational meeting; the next meeting is at 6 p.m. Feb. 18.

"A lot of the countries are constantly changing whether they are participating in out-of-country adoptions," Young said.

Although the process may involve long periods of waiting, adoptive parents spend some of that time getting cleared to adopt, including undergoing background checks for any history of child abuse or neglect, completing physicals, submitting four references to demonstrate the support of family and friends for the adoption, and undergoing a home study that includes checking for any safety hazards in the home. Families also take classes to learn what to expect during the adoption experience.

"Adopting a child is much different than parenting," Young said. "There are a lot of things to consider about bonding and attachment."

To explain the bond that they felt when they adopted two girls from China, Marybeth and Noel O’Connor pull out home movies made of their daughters’ two "Gotcha Days."

Even though she has seen the movies many, many times, Marybeth O’Connor still wipes away a tear as she relives seeing her daughters for the very first time.

On July 7, 2003, she held 10-month old Paige tenderly for the first time. The camera, wielded by her husband, captured a connection: Paige and her new mother locked gazes. On March 23, 2007, Paige was back in China with her parents to meet her 11-month-old sister, Eve, who was dressed in a tiny pink outfit for the joyous occasion.

"I think my favorite part was when I got to see my little sister," Paige said.

"It was love at first sight," Marybeth said. "It was bonding immediately."

Marybeth lives out her adoption advocacy through her family. She explains that when she and Noel were married, she asked him to consider adoption as the way to enlarge their family. They chose to adopt through Catholic Family Center, because Marybeth had been adopted through the Rochester-based agency in the 1960s.

"I thought it was a great idea," Noel said of adopting. "It’s as natural as anything. My experience of seeing Marybeth’s family is that they are a family as tight-knit and as close as any other."

"It’s a significant undertaking," Marybeth O’Connor said. "It takes a lot of work and effort to go through the process. There are psychological exams, and medical exams. You get scrutinized, which is good."

Now that the adoptions are complete, the O’Connors have put effort into helping their daughters embrace their multicultural heritage. Noel, a native of Dublin, Ireland, and Marybeth, who was adopted into an Italian family, have sought out opportunities for their daughters to learn more about their Chinese heritage and Chinese culture.

The O’Connors are part of a network of families that include children adopted from China, and they reunite with the girls’ adoptive sisters, who were all from the same geographic area in China and whose new families all traveled together from the United States for the adoption.

Adoptive families feel a special bond that draws them together, Noel noted.

"The kids really are wanted," he said. "There’s part of that experience that stays with you."