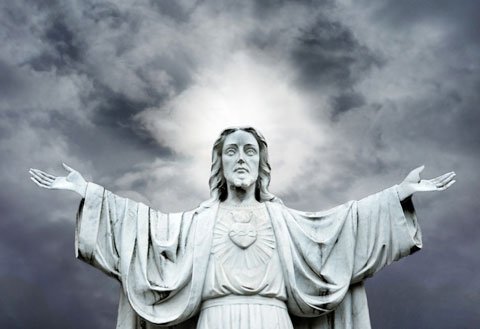 And do this because you know the time; it is the hour now for you to awake from sleep. For our salvation is nearer now than when we first believed; the night is advanced, the day is at hand.

Stay awake! For you do not know on which day your Lord will come. … So too, you also must be prepared, for at an hour you do not expect, the Son of Man will come.

Throughout Advent, Christians prepare themselves for Jesus’ birth. Yet these seemingly contradictory Scripture passages — taken from the readings of Nov. 28, the first Sunday of Advent — reflect a more complex significance attached to the four-week period.

Father Frank Lioi, pastor of St. Mary Parish in Auburn, noted that not one but three comings of Christ are to be acknowledged during Advent: his coming in history at Christmas; his coming in majesty at the end of time, also known as the Parousia; and his coming in mystery through the sacraments in our daily lives.

Father Lioi said that Christ coming as the Christ-child "certainly gets all the attention, because it has happened in a certain time and place and therefore can be ‘reproduced’ in manger scenes and other representations." And Christ coming in mystery can be readily acknowledged "because we participate in the sacraments all the time," he added.

Father George Heyman said he emphasizes this threefold aspect in his Advent homilies.

"There’s always that past, present and future," said Father Heyman, director of continuing education at St. Bernard’s School of Theology and Ministry in Pittsford.

But does preparation for Christ’s return to earth get its just due at Advent? Even though it’s clearly referenced in the Advent readings, Father Heyman said this emphasis "isn’t first and foremost on the minds of Catholics" during the season. Father Lioi agreed, saying the comparative lack of attention toward Christ’s next coming is due in part to the challenge of imagining an event that has not occurred. In addition, he observed, the prospect of the world ending is so daunting that people may sidestep this subject altogether.

"Christ coming in majesty, at the end time, is perhaps the most difficult of the three comings to comprehend and take into ourselves," Father Lioi said.

Not unlike rituals more commonly associated with Lent, Advent has been observed since the early centuries of the church as a period of fasting and reflection in the weeks before Christmas. This tradition formed long before any secular society began to emphasize buying Christmas presents, attending office parties and decorating trees. In what now might seem a countercultural approach to Christmas, the Catholic Church continues to offer penance services and other special opportunities to prepare for the Lord’s coming.

In Scripture passages selected for Advent readings, it’s clear that readying for Jesus’ return to earth carries equal weight with festive anticipation of his birth. Along with the apocalyptic first-week readings, passages for the second and third weeks in Matthew 3 and James 5 state that the next coming of the Lord is at hand. Father Heyman noted that the New Testament authors, especially St. Paul, were expecting an imminent return of Jesus.

"They believed he was coming next Tuesday," he remarked.

And perhaps for good reason. Consider a portion of Matthew 24, in which Jesus described the stirring events that would accompany his final coming and then stated, "Amen, I say to you, this generation will not pass away until all these things have taken place."

Obviously some 2,000 years have passed and these events have not yet taken place, leaving open to debate what Jesus meant by "this generation." Just when will Christ return to earth? That’s anybody’s guess, since Jesus also says in Matthew 24, "But of that day and hour no one knows, neither the angels of heaven, nor the Son, but the Father alone."

Despite this declaration of uncertainty from the Lord himself, Father Heyman acknowledged that many attempts have been made to predict the end of the world by calculating specific days and years based on Scriptural references. This was especially true as the year 2000 approached, as the new millennium was linked to references in Revelation 20 that the Christian faithful were to reign with Christ for 1,000 years.

Then again, with so much time having passed, Father Heyman ventured that others may shrug off entirely the possibility of Jesus’ return to earth. In an age when instant gratification can be so easily achieved via such technology as iPods and ATMs, he remarked, it’s tough for Christians to grasp that an event with a waiting period of 2,000-plus years might still happen.

Still, he said, Catholics should not discount the possibility that Jesus’ return could be just around the corner.

"Why would monks get up at 2 a.m.? Well, they’re keeping a watch if he comes," Father Heyman said.

Preparing oneself spiritually for Jesus’ coming — regardless of the where, when and how — is what Advent is all about, Father Heyman stressed.

"The whole idea is, we really do need an ongoing conversion of the heart. If the Lord returns today, will we be busy about our things of this world or about the kingdom of the Lord?" he asked.

If the answer is the latter, then Father Heyman said we should be eager for that kingdom to come to us. After the Lord’s Prayer during Mass, we recite "We wait in joyful hope" — not fearful hope — "for the coming of our savior, Jesus Christ," Father Heyman noted. Yet he remarked that for too many people, "the end of the world to us means doomsday. We’re in the nuclear age of destruction, devastation."

Father Lioi agreed that Catholics too often regard Christ’s return to earth "in terms of doom and gloom."

What if Jesus doesn’t return during our lifetime, and instead comes to us via death? This, also, is a happy prospect for Catholics, according to Father Lioi.

"Even (death) should not be scary, if we realize that Christ is with us always because we were baptized in Christ and that death is our final ‘homecoming,’" he explained.

Pope Benedict XVI, likewise put forth a positive vision about our future with Jesus as dictated by our faith. During a November 2008 general audience on eschatology — the branch of theology concerned with death and the end of the world — he said it’s vital to remember that Christ is with us forever.

"Without Christ, even today the world’s future is dark, and fear of the future is so common. Christians know that Christ’s light is stronger and, therefore, they live with a hope that is not vague, with a hope that gives them certainty and courage to face the future," the pope said.

Pope Benedict emphasized that we should ask Christ to come to us in our everyday lives — the third Advent of his coming, along with those at Christmas and the end times.

"We do not of course desire the end of the world. Nevertheless, we do want this unjust world to end," the pope stated. "We also want the world to be fundamentally changed, we want the beginning of the civilization of love, the arrival of a world of justice and peace, without violence, without hunger. We want all this, yet how can it happen without Christ’s presence?"