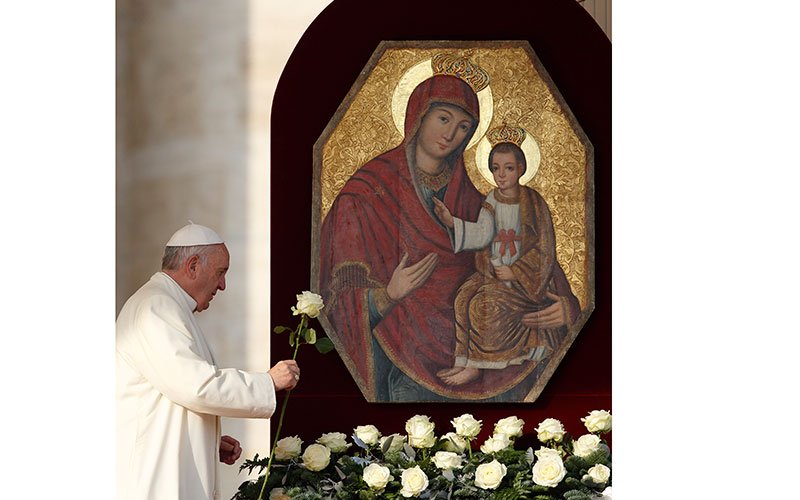 Pope Francis presents a rose at an icon of Mary and the child Jesus as he begins his general audience in St. Peter's Square at the Vatican Dec. 9, 2015. A rose symbolizes Mary in the old German hymn, "Lo How A Rose E'er Blooming." (CNS photo by Paul Haring)

Advent: We belong to the One who is, was and is to come

The 500-plus-year-old German Advent hymn, “Lo How A Rose E’er Blooming,” is not one I grew up singing in church. I had never even heard it until indie musician Sufjan Steven released his box set “Songs for Christmas” in 2006.

Originally created as a gift the artist gave his friends and family, he has since released the collection to the general public and it is a family favorite.

In the collection, Stevens does a deep dive into older, Christocentric hymns and carols, rich in theology and poetry as opposed to pop songs about the season. “Lo How A Rose E’er Blooming” is among that collection.

The hymn first appeared in print in German in 1599 and is mostly sung to a simple harmonic melody by 17th century German composer, Michael Praetorius. This hymn is rich in both symbolism and theology.

A rose is a symbolic reference to the Virgin Mary. The hymn speaks of Jesus’ lineage and prophecies from Isaiah foretelling the Messiah, making it the perfect hymn to sing during Advent.

Now that the Advent hymn has come into my family rotation, I find that artists such as Feist and Sting have their own haunting versions of the song. Yet the song is done best with a full orchestra and chorus, invoking both the tenderness and pageantry of the piece.

The first two verses speak of Mary, the “rose,” blooming from the stem of the tree of Jesse, the symbol used for the lineage of King David’s father Jesse, from whom the Messiah would be born as was prophesized in the Book of Isaiah:

Combining both Old Testament prophecy and Christ’s lineage in the Gospels of Matthew and Luke, the hymn sings:

“Lo, how a Rose e’er blooming / From tender stem hath sprung! / Of Jesse’s lineage coming / As men of old have sung.”

In the third verse, the bud or rose, Mary, has given birth to Christ, represented too as a small flower, who is:

“True man, yet very God, / From sin and death He saves us / And lightens every load.”

There is a sweet tenderness to this quiet little song. The simple nature of the melody lends itself to contemplation and that sense of waiting in anticipation that comes with Advent.

Listeners remember the foretelling of the Christ Child in the Old Testament as we hear references to those holy texts. We sense the longing of those waiting for Christ. That longing mirrors our own in the lines:

“This Flower, whose fragrance tender / With sweetness fills the air, / Dispels with glorious splendor / The darkness everywhere.”

As I sing the last verse, I imagine waiting as Israel did for generations, longing for relief from their suffering. I wait as Mary did, for 9 months, knowing she held the savior of the world in her womb.

Waiting, as the disciples did, looking at the sky where Jesus ascended, wondering when he would return. And as we do now, we wait for his presence to bring light in dark place.

The last line is:

“True man, yet very God, / From sin and death He saves us / And lightens every load.”

There is a melancholy in this hymn. The tension we sense each Advent as we wait for a child to born, only to die, for us. Each Christmas points to Good Friday, but ultimately to Easter — when Christ will save us from sin and death.

We wait in hope.