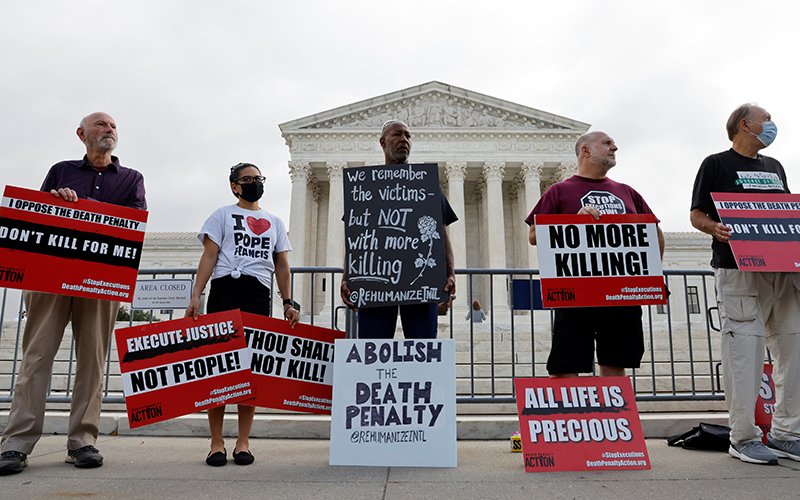 A group of demonstrators rally against the death penalty outside the U.S. Supreme Court building in Washington Oct. 13, 2021. (CNS photo by Jonathan Ernst/Reuters)

WASHINGTON (CNS) — When the U.N. General Assembly passed a resolution Dec. 15 to establish a worldwide “moratorium on executions with a view to abolishing the death penalty,” the United States continued its practice of voting against it.

The U.S. was joined by 36 other countries in opposing a resolution that comes up every two years. This year, 125 countries voted in favor of it and 22 countries did not vote.

“It is past time that the U.S. join the supermajority of countries who vote in favor of a universal death penalty moratorium,” said Krisanne Vaillancourt Murphy, executive director of Catholic Mobilizing Network, noting that overall support for this action has “grown consistently over the years.”

“Disappointingly, the U.S. retained its historical vote of ‘no,'” she said in an email to Catholic News Service.

“We have work to do in the United States,” she said, regarding the continued use of the death penalty amid calls to end capital punishment that reflect “a growing consensus — not just among Catholics, but among all people of goodwill — who recognize that capital punishment is irreparably broken.”

Vaillancourt Murphy pointed out that the Vatican “has long supported a U.N. death penalty moratorium resolution.”

She said Pope Francis has consistently spoken about it and in September, he announced the global abolition of the death penalty as his official prayer intention for the month.

Robert Dunham, executive director of the Death Penalty Information Center, told Newsweek magazine that the U.S. vote against the resolution “put us in the same league, with Iran, Iraq, Saudi Arabia, China, North Korea and Vietnam.”

“As a country, we pride ourselves on a commitment to human rights and the commitment to the dignity of all individuals. To be aligned with the actions of a country that actively repudiates those values creates a significant problem,” he said.

Although U.N. members are not bound to follow resolutions passed by the General Assembly, a U.S. vote in favor of this resolution would have sent a message, Dunham noted, stressing that it would have given President Joe Biden “an unparalleled opportunity to make a statement in favor of human rights with his vote.”

Tags: Life Issues
Copyright © 2023 Catholic News Service, Inc. All rights reserved. Linking is encouraged, but republishing or redistributing, including by framing or similar means, without the publisher's prior written permission is prohibited.