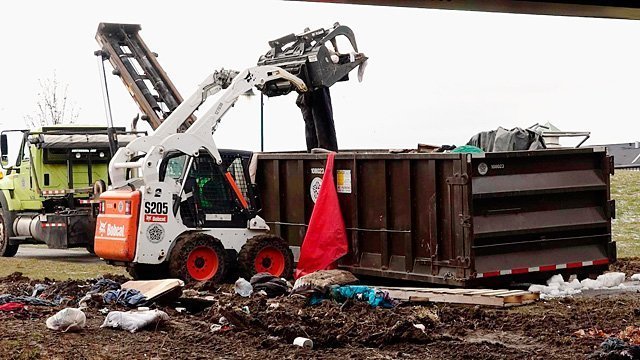 The City of Rochester bulldozed an encampment under the Frederick Douglass-Susan B. Anthony Memorial Bridge Dec. 20.

Advocates for the homeless are attempting to raise funds for a long-term housing option for the chronically homeless after the city of Rochester bulldozed an encampment under the Frederick Douglass-Susan B. Anthony Memorial Bridge Dec. 20.

The “A Home for the Holidays” GoFundMe Campaign from the House of Mercy has raised more than $6,000 in donations toward its $60,000 goal to purchase a home for the chronically homeless in the city limits of Rochester. The campaign is available at www.gofundme.com/SanctuaryVillage.

Homeless advocates said the city bulldozed tents, sleeping bags and other items Dec. 20 at the temporary encampment, which is located behind 99 South Ave.

“The City intervened after a number of safety hazards at the site posed serious risks to both those staying there and any first responders needing to respond to potential incidents,” said a statement from the city of Rochester. “Most concerning were two large, open fires that caused a tent to burn up Thursday night.”

Fires have been used to heat the area to protect against the cold. The city statement said that those staying at the encampment were offered housing at one of the city’s shelters or at local hotels, and then the city performed a cleanup at the encampment. 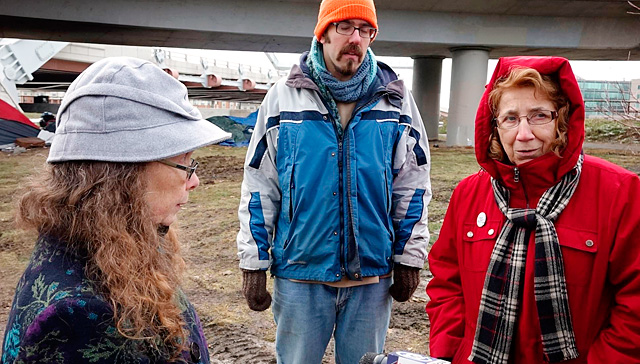 Sister Rita Lewis (from left), Ryan Acuff and Sister Grace Miller, representatives of the House of Mercy, stand on the Sanctuary Village site in Rochester Dec. 20.

Yet Sister of Mercy Grace Miller, executive director of the House of Mercy, said that the homeless accepted the offer of temporary housing, not realizing that any items left behind would be put into a Dumpster.

“When some of the homeless came back that night, all the tents were gone except the ones we stood in front of to save, and their IDs were gone and what little bit of things they had were put in Dumpsters,” Sister Miller said.

City officials said that personal items left at the camp were hand packed and put in boxes and can be reclaimed by calling 311 or coming to City Hall.

“Items that posed a health risk, including piles of syringes and intravenous needles, and tents and other effects covered in mud and human waste, were picked up mechanically,” the city’s statement said.

Sister Miller said homeless advocates have been working to identify sites for more permanent housing solutions, but that city officials have vetoed each site that has been presented to them.

“We didn’t expect the homeless to stay out all winter in tents,” she said. “That’s not the best situation, but it’s better than nothing.”

The city contends that advocates are the stumbling block.

“City officials urge the homeless advocates to work with them to find a permanent solution, as they have rejected every solution posed by the City thus far,” the city’s statement said.

City and Monroe County officials also have said that space is available in area shelters, but homeless advocates say that the chronically homeless residents at the encampment, called Sanctuary Village, have been turned away from shelters for various reasons, including lack of space and failure to meet shelter requirements.