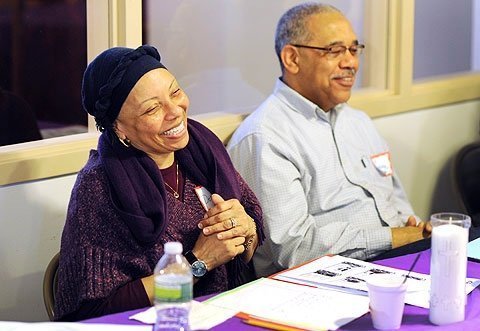 Denise McGowan and George Fontenette take part in a group discussion during a day of reflection March 3 at Rochester's Immaculate Conception Church.

More than a dozen people gathered at Rochester’s Immaculate Conception Church March 3 to discuss and reflect on the experiences of African-American Catholics and compare those experiences to the findings of the National Black Catholic Survey, which was conducted during the summer of 2011.

The day of reflection served as a precursor to the National Black Catholic Congress, which is held every five years and will next take place July 19-21 in Indianapolis. The theme of this year’s congress will be "Faith Engaged. Empower. Equip. Evangelize. Celebrating 25 Years of What We Have Seen and Heard." Participants in the March 3 event reflected on and discussed each of the components of that theme as well as the national survey, according to Lynette Saenz, diocesan coordinator for the National Black Catholic Congress.

"It was a very positive experience. Everyone was very engaging, and it was a great conversation," said Saenz, who put together a report summarizing the participants’ observations. This report will be sent to the congress organizers and will help them develop the event’s programming and presentations, she said.

The National Black Catholic Survey found that African-American Catholics tended to be more engaged in their parishes than Caucasian Catholics, a finding that affirmed the experiences of the African-Americans who participated in the local day of reflection, Saenz said. Participants said they were driven to attend Mass and participate in their parishes not out of a sense of obligation, but by a call to serve others and by the centrality of the Eucharist. They also theorized that families might be partly responsible for the African-American Catholics’ high levels of parish engagement.

"In the African-American community being part of a church is like being part of an extended family," Saenz said. "The black church historically provided the only opportunity for self-expression and positive self-esteem, so being part of the church was seen as vital to survival."

The national survey found that African-American Catholics feel not enough emphasis is placed on black saints and vocations recruitment in the black community, and the local participants echoed those concerns, Saenz said.

"One of the areas where there was dissatisfaction … was the need for representation, to have people who share the same experience represented in the church," she said.

The individuals who participated in the local day of reflection also identified some areas they thought needed to be improved, including adult faith-formation, ministries for children and youths, and the promotion of family values and positive male role models. They especially would like to see the men in the community step forward and serve as role models for the young people, especially those in single-parent families.

"The reality is that the resources that are currently available are in general a little bit above the level where the kids are. You really have to start with some of them at the basics," Saenz said.

The national survey’s findings will be discussed in detail during the National Black Catholic Congress this summer. Five people from the Diocese of Rochester have signed up to attend the congress and will travel to Indianapolis by bus with participants from the Diocese of Buffalo.

There are still spots available on the bus for those wishing to attend the National Black Catholic Congress. For more information or to register for the congress and reserve a hotel room and a seat on the bus, contact Lynette Saenz at 585-3228-3210, ext. 1318.