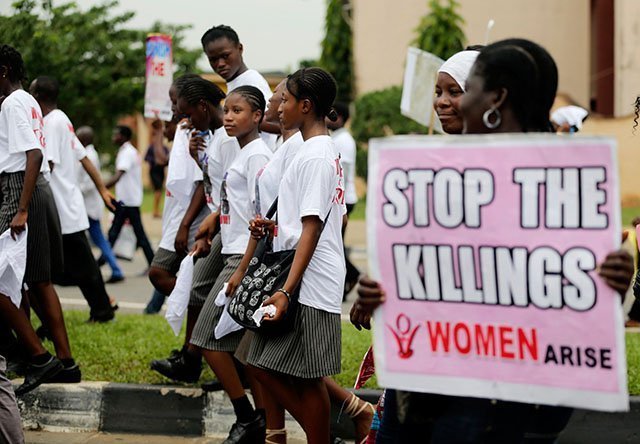 Students join a May 12 protest in Lagos, Nigeria, demanding the release of abducted secondary schoolgirls in the remote village of Chibok in April.

Laws need to be put in place to ensure that African girls are safeguarded from useless, abusive and oppressive traditional practices, Archbishop Telesphore Mpundu said in late May at a Mass for the Little Servants of Mary Immaculate.

"As a church, we want to see the African girl child well-protected and respected right from the word go" the archbishop said.

He said African Catholic leaders would intensify a campaign to ensure girls also have the same opportunity as boys to safely grow up and realize their full potential.

He noted that women stood with Jesus at the time of his death even after most male apostles ran away.

The archbishop’s call came in the wake of the April kidnapping of more than 200 Nigerian schoolgirls. In addition, many African nations have traditions of families offering underage girls for marriage, although in most countries the law stipulates girls must be 16.

He said gender violence should be outlawed.

"The police also need to do more to protect the girl child, and to punish the offenders," he said, noting that many law enforcement officials will not deal with gender-based violence on the basis that they were domestic matters.