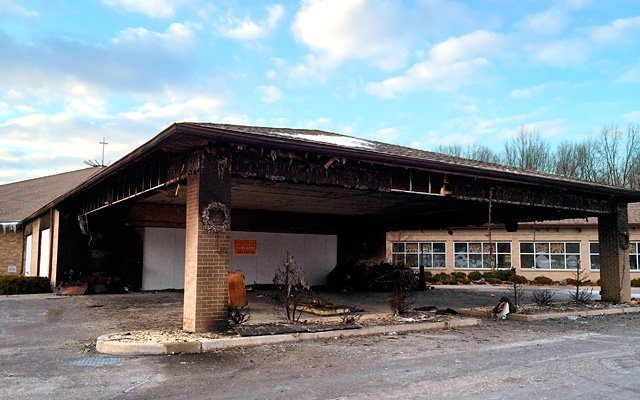 St. Pius Tenth sustained damage in a late-night fire Jan. 1. The cause of the fire is still under investigation, and an accurate estimate about the cost of the fire's damage will take some time.

EDITOR’S NOTE: This story was updated on Jan. 28.

CHILI — The strains of "The First Noel" drifted from the loudspeaker at the entrance to St. Pius Tenth’s parish center on Jan. 2, but the mood outside the church was anything but festive.

A constant stream of visitors drove into the parking lot and pulled up to the church to gaze temporarily at the spot where a fire had raged just hours earlier.

The fire in the church started sometime before midnight, according to Father Paul Bonacci, pastor of the Chili parish. The church’s alarm system was activated at approximately 11:45 p.m. on Jan. 1, he said, at which point a parishioner who lives across the street from the church and is a firefighter received the alarm notification and looked out his window.

"He saw the whole front end of the building burst into flame," said Father Bonacci, who received a phone call notifying him about the fire just minutes after midnight.

The cause of the fire is still under investigation, but Father Bonacci said Jan. 28 that no signs of arson have been found so far in the investigation.

"There doesn’t seem to be any indication of a break-in or arson," he said. "From my humble opinion, it definitely seems to be an accidental fire."

It will take some time for parish officials to have an accurate estimate about the cost of the fire’s damage, he said. The parish is working closely with diocesan risk-management officials because the parish was covered through the diocesan self-insurance policy, he added.

"The whole narthex and baptismal area suffered severe fire damage. There’s a lot of severe heat and smoke damage throughout the church and part of the parish center, which is connected to the church," Father Bonacci said.

Just hours after the fire was extinguished, the parish held its regularly scheduled 8:30 a.m. daily Mass in the gymnasium of St. Pius Tenth School and planned to hold both daily and weekend Masses there as long as necessary. Father Bonacci said he was grateful to the school’s staff for their generous hospitality to parishioners, many of whom have been deeply affected by the damage to their church.

St. Pius Tenth is a strong parish, however, and Father Bonacci said he was certain it would rebound from this blow. The parish’s mission statement reads, "Everyday we reach to restore all things in Jesus Christ," which is drawn from a quote from Pope Pius X.

"I think the spirit of the people of St. Pius Tenth is to restore," he said. "What physical form that will take, I’m not sure, but this parish will restore what needs to be restored."

Parishioners are eager to begin the work of restoration, agreed faith-formation director Johan Engstrom, who spent much of Jan. 2 fielding phone calls and e-mails from parishioners and other concerned individuals offering assistance. One such parishioner offered to let St. Pius Tenth borrow a portable altar that had belonged to a deceased relative who was a priest. The parish took the parishioner up on this offer, and that portable altar is being used for Masses in the school gym, Engstrom said.

Though the parish has had many offers of volunteer help with repair and restoration, before any such work begins, insurance adjustors, engineers and inspectors must complete their tasks, Father Bonacci said.

"We have to just let that process run its course before we can take advantage of the volunteer spirit here. At this very moment, the most important thing is prayer," he said.

Crews from Serv Pro cleaned and encapsulated the gutted parish center, and contractors will next be hired to reconstruct it. At the end of January, engineers were testing the church’s roof, decking and beams to determine if they can be reused or if they will have to be torn down, Father Bonacci said.

Father Bonacci said the church’s current hardship reminds him of the hardships suffered by early Christians.

"The early church suffered a lot of persecution and so many theologians will say that’s what led to its spread throughout the world," he said.

He noted that cards for the parish have come from schoolchildren throughout the diocese, and donations have come from many other churches, including non-Catholic churches.

Parishioner Kevin Kelly believes that with prayer and Father Bonacci’s leadership, St. Pius Tenth Parish will soon be able to move forward even stronger than before. Kelly, who has been a parishioner since 1982 and put his eight children through the parish school, was one of the dozens of parishioners who drove to the parish Jan. 2 to gaze upon the fire’s damage.

"We have a lot of good memories here," Kelly said as he paused in front of the church with his dog, Dusty. "Father Bonacci says everything happens for a purpose. God has a reason. I don’t know if that counts for fires, but I think it does."