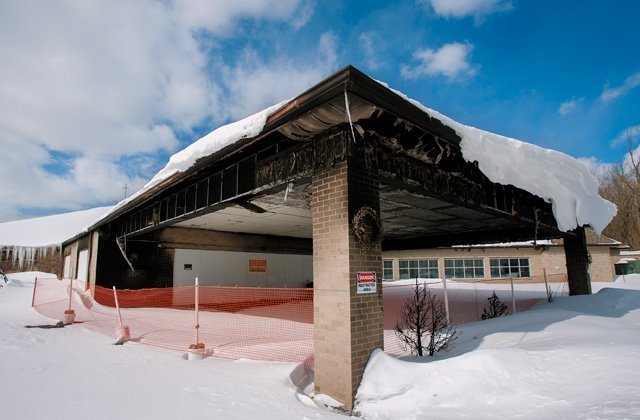 A Jan. 1 fire that started at the front of St. Pius Tenth Church in Chili caused extensive damage throughout the church and parish center. Damage to the exterior can be seen in this photo taken Feb. 25.

Due to extensive structural damage caused by a Jan. 1 fire, St. Pius Tenth Church in Chili will be razed and rebuilt, according to Father Paul Bonacci, parochial administrator, and Jamie Ott, diocesan risk manager.

Ott said engineers determined that extensive heat damage throughout the church itself compromised the structure of the building and made it unsafe for reuse. The fast-moving fire started in the front area of the church, and an automatic alarm alerted authorities to the fire.

Investigators were not able to list an official cause of the fire, Father Bonacci noted. 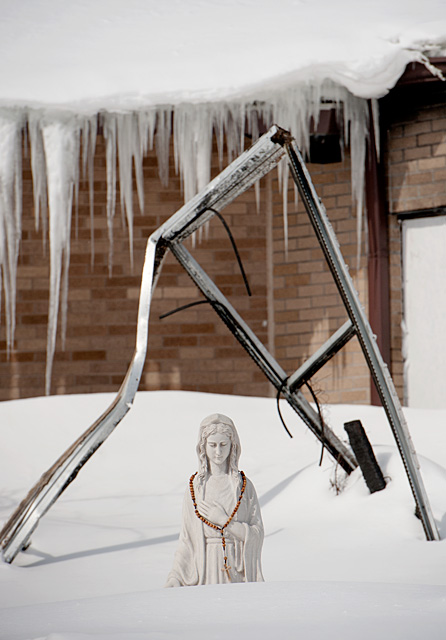 Steel framing damaged during a Jan. 1 fire sits discarded near a statue of Mary at Chili’s St. Pius Tenth Church Feb. 25. Church officials hope to raze and rebuild the church.

"With the intensity of the fire, it destroyed evidence,"he said. "In looking at the area where the fire started, they know that it was probably electrical in nature. The official cause is undetermined."

Ott said the parish was fully insured. Though the church itself cannot be saved, a few items were able to be salvaged and have been cleaned and put in storage, she added. Crews were able to salvage a lot of kitchen equipment, and there is hope that some of the pews may be able to be reused as well, she said.

Planning for the new church has not yet begun, and no time frame has been set for rebuilding, Father Bonacci said. He said the current church was built in 1973 and the parish center was added on in 2005, he said.

"My desire is that the church building will express the deep faith of the eucharistic Lord, to whom they come to present their needs and concerns in worship, prayer and gratitude," Father Bonacci said.

He noted that other parishes have generously offered to host funerals and have welcomed St. Pius Tenth couples to reschedule their weddings at their churches, if available. Several parish funerals have been moved to Holy Ghost Church, St. Christopher Church and the chapel at the Sisters of St. Joseph Motherhouse.

In the meantime, parishioners have kept their spirits up even in the face of grief over the loss of their church, Father Bonacci said.

"Throughout the whole process, I’ve been talking to people about how we don’t get to Easter Sunday without Good Friday," he said. "We’ve had our Good Friday."

Father Bonacci said the parish continues to benefit from prayers.

"I’m just so impressed with the faith of the people, and with the way they have pulled together," he said. "This is something that would have caused a lot of people to be discouraged. It’s a privilege to be with these people."