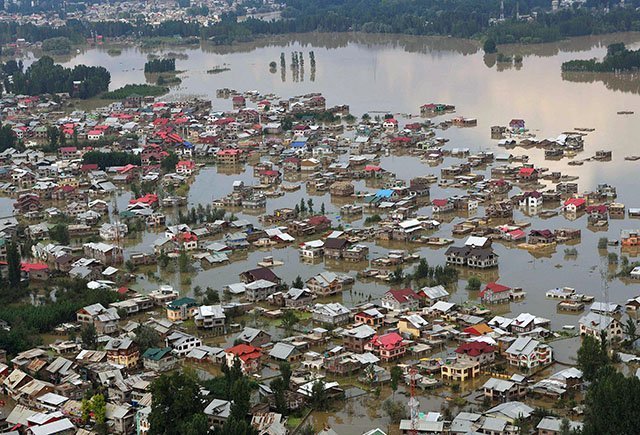 This aerial view taken Sept. 10 shows houses submerged by floodwater in Srinagar, India. While nearly 250 people have perished in the floods following rains in the Kashmir Valley in the foothills of the Himalayas, more than 700,000 people have been marooned on rooftops, trees and hills since Sept. 7.

CHENNAI, India (CNS) — The Catholic Bishops’ Conference of India has appealed to Catholics to mobilize funds and materials to augment church relief work in northern Jammu and Kashmir state, devastated by floods.

While nearly 250 people have perished in the floods following torrential rains in the Kashmir Valley in the foothills of the Himalayas, more than 700,000 people have been marooned on rooftops, trees and hills since Sept. 7.

Media reported that the casualty figures could mount as many areas have no communication links and the extent of death and devastation is not known yet. Even in the state capital, Srinagar, floodwaters had risen up to the fourth floor of buildings, and some people had to swim to safety.

The bishops’ Sept. 10 appeal expressed "sympathy and solidarity with those thousands of people who lost their homes, shelters and other establishments due to the unprecedented deluge," the worst in 60 years.

In the appeal to the bishops and other leaders of the church, the conference president, Cardinal Baselios Thottunkal, exhorted "the community of faithful, institutions and people of good will to contribute generously to rebuild the lives of the people."

With heavy presence of security forces in the Kashmir region plagued by Islamic militancy, security forces have been leading the evacuation of the marooned people by boat or by airlifting them.

Caritas India, social action wing of the Indian church, said people are "with no means to communicate their location to the rescuers as the power and telephone lines (including) mobile links are down for three days in a row."

"Five members of our emergency team are in Kashmir now assessing the situation. They are in touch with government officials to coordinate the relief work," he said.

Babita Alick, Caritas India’s team leader for disaster management, told CNS that "two Caritas staff who flew to (worst-hit) Srinagar could not move out of the airport surrounded by floodwater. They were stranded there for two days."

"The security forces are turning relief workers away as they would be a liability for the security waters with the high level of water there. So our emergency team has moved to Jammu," outside the Kashmir Valley. "Right now, our relief work is being coordinated from there," Alick added.

"It is total chaos there (in Srinagar). We could not enter the city," Prakash Singh, a Caritas India worker who had to return to Delhi Sept. 9, told CNS.

"There was 25 feet of water in downtown Srinagar. We were moving in an army truck and it could not proceed. There was no electricity, water or mobile link," he said.

Tony Castleman, country representative for India for the U.S. bishops’ Catholic Relief Services, told CNS his agency was awaiting government permission "to carry out a rapid assessment in Jammu and Kashmir later this week once the water has receded enough to allow access to affected communities."

"Based on results of the assessment, CRS will provide emergency relief to address priority unmet needs," Castleman said.