After violence in Missouri, parish gathers to pray - Catholic Courier 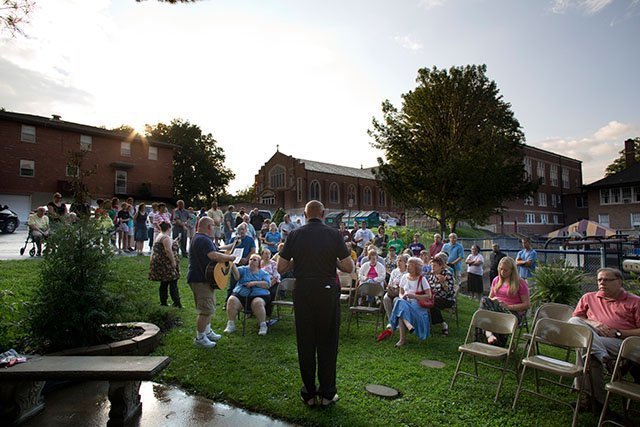 Parishioners from Blessed Teresa of Calcutta in Ferguson, Mo., hold a prayer vigil for peace Aug. 11. Protests and riots in the neighborhoods of Ferguson have followed the Aug. 9 shooting and killing of unarmed teenager Michael Brown by a police officer.

FERGUSON, Mo. (CNS) — Against the backdrop of demonstrations and unrest, some of it violent, that has followed the Aug. 9 killing of an unarmed black teenager by police in Ferguson, members of a local Catholic parish did perhaps the only thing they could — they prayed.

As police and protesters stood in an uneasy truce Aug. 11 close to a burned-out convenience store and businesses looted in an earlier demonstration, two miles away members of Blessed Teresa of Calcutta Parish prayed the rosary.

"As a community, we needed to come together in prayer," said parishioner Cathy Cunningham, who described the community as "very sad."

"We just have to put it in Jesus’ hands, and he will heal us," she told the St. Louis Review, the archdiocesan newspaper.

Led by their pastor, Father Robert Rosebrough, about 100 people gathered to pray the rosary at the parish’s Our Lady of Lourdes grotto.

Since the fatal shooting of 18-year-old Michael Brown, the community is demanding answers. Emotions run deep in the biracial community of Ferguson, 11 miles from downtown St. Louis.

The shooting has been met with protests and some violence, like the night of Aug. 10 when some local businesses were looted and the QuikTrip convenience store was set on fire, after a vigil that drew a few thousand people.

The next day was void of that violence but the scene remained tense. Police cars and officers in riot gear filled the parking lot of the burned-out store. Meanwhile, protesters held signs in front of the former store and crowds gathered in the middle of the street and alongside it as cars inched through with horns honking.

Bystanders hooted and hollered, most shouting in protest and many raising their arms in surrender — the gesture they say Brown was making as he was shot to death by a Ferguson police officer. Officials say Brown, who was unarmed, resisted arrested and struggled for the officer’s gun, then was shot as he fled.

Cunningham was among four women from Blessed Teresa who hatched the rosary idea. They were driving home Aug. 10 from an event at St. Joseph Parish in Manchester.

"In the car, Cathy Cunningham said the community needs to heal; that’s basically how it happened," said Dorothy Frese, one of the four. "We had to do something. It just got rolling."

Another in the group, Jeanne Baer, who is the parish’s pastoral associate, bounced the idea off Father Rosebrough, who was immediately onboard. "Prayer is needed," he said.

The parish’s youth ministry director, Jeff Finnegan, suggested the grotto for a venue. An email blast to parishioners and notices on social media and the parish website spread the word.

On cue, just before the service, the sky opened and drenched all with rain. "Baptismal waters," Father Rosebrough called it.

Father Rosebrough chose the luminous mysteries for the rosary, added by St. John Paul II in 2002. They also are known as the mysteries of light.

Earlier that day, as he walked along the avenue past boarded-up businesses damaged by the previous night’s violence, the priest said, he kept coming back to the luminous mysteries.

"It seemed like it was right on target. It calls us to do something," he said. On that walk he also stopped briefly at "ground zero" — the QuikTrip — and "just quietly blessed the place."

"People have invested money there, people got injured last night, and people don’t realize that employees there are now out of a job for several months. I just asked the Lord to help them heal," Father Rosebrough told the St. Louis Review.

Healing will come in time — after an investigation into the shooting of Brown and also an examination of the deeper issues that precipitated the Aug. 10 violence. Now, though, the wounds are raw.

"We don’t have the answers," Father Rosebrough said. "We just ask for his presence and consolation; that’s what people need."

And if a sign also was needed that God heard the prayers of the parishioners, there was that too. Rays of the setting sun broke through the clouds above Blessed Teresa of Calcutta Church.