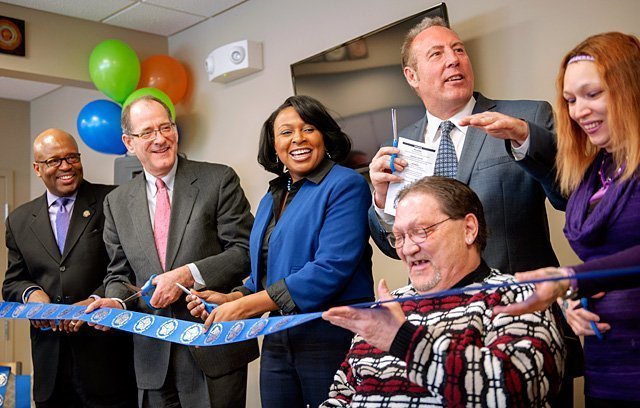 A ribbon cutting ceremony was held in 2014 at Rochester’s Son House Apartments, a Providence Housing Development Corp. facility for people who have struggled with homelessness.

EDITOR’S NOTE: The following series of articles illustrate how Catholic Charities agencies throughout the 12-county Diocese of Rochester respond to the call to carry out the corporal works of mercy, especially during this Jubilee Year of Mercy. The corporal works of mercy are: feed the hungry, give drink to the thirsty, clothe the naked, shelter the homeless, visit the sick, visit the imprisoned and bury the dead.

Catholic Charities agencies around the diocese have taken up the biblical call to "shelter the homeless."

"(They) are examples of (how) Catholic Charities, in its mission to serve the most vulnerable, gives great priority to services for homeless persons," said Jack Balinsky, director of diocesan Catholic Charities.

Below are some examples of how Catholic Charities agencies provide shelter for the homeless:

* Rochester’s Providence Housing Development Corp. manages safe, affordable housing for 1,500 people living in 22 facilities throughout the diocese, according to the Catholic Charities Winter 2016 newsletter. The agency recently undertook three new initiatives for the homeless. At the start of 2016 Providence received a $50,000 grant from the State Office of Temporary and Disability Assistance that will fund a partnership with Catholic Family Center — which also runs three homeless shelters in the city — to provide a social-work case manager who will work with previously homeless residents housed in Providence’s 21-unit Son House facility. Providence’s Housing First Program will place at least 75 chronically homeless individuals and families in permanent, supportive housing, and its staff also will develop individualized service programs to help individuals and families maintain their housing status. Another Providence initiative, the Rapid Rehousing Program, will provide up to 24 months of financial assistance and/or support services to enable homeless individuals and families to quickly return to permanent housing. This program targets individuals and families who don’t meet the definition of chronic homeless and may not need long-term assistance.

* Since 1994, Catholic Charities Community Services in Rochester has offered both emergency and long-term housing subsidies for people living with HIV/AIDS and has helped hundreds of families affected by these illnesses. Founded in 1982 as Catholic Charities’ Community Residential Program, the agency expanded into services for people with HIV/AIDS and traumatic brain injuries and assumed its current name in 2000. The agency also serves people with disabilities seeking alternatives to nursing homes.

* Catholic Charities of Chemung/Schuyler in recent years has enhanced its Homelessness Prevention and Rapid Re-Housing Program through two federal grants totaling more than $1.2 million. The agency also participated this past January in Point-In-Time study, which is a coordinated effort to count the number of people who are homeless within a certain region on a single, specific day, according to the Catholic Charities newsletter. For this study, Catholic Charities staff conducted surveys in the Elmira area from 7 p.m. to 7 a.m. in an attempt to identify people living in places not meant for shelter, such as under bridges or in abandoned buildings or sheds. Staff identified 18 people sleeping outside on a January night. On that same night, Catholic Charities’ Second Place East Homeless Shelter in Elmira had its highest guest count in nine years: 34 individuals, including 10 children.

* A joint project of Catholic Charities of Wayne County and diocesan Catholic Charities’ Project Unity, La Casa has been offering temporary shelter to the immigrant community of Wayne County since Bishop Matthew H. Clark dedicated the house in October 2004. The two-story house includes a studio apartment, one three-bedroom apartment and two two-bedroom apartments for use by eligible residents on a three-month basis. Peter Mares, an outreach worker for Catholic Charities of Wayne County, said the house has welcomed about 35 to 40 families and individuals annually since it opened its doors. Volunteers helped renovate the house and continue to help with maintenance, landscaping and organizing events such as community open houses at the facility.

* Offering need-based scholarships and welcoming participants with physical and developmental disabilities, Camp Stella Maris in Livonia offers a home away from home to young people every summer. Its resident, day and family camp programs are open to people of all faiths, according to information from the Catholic Charities newsletter. Established in 1977 by the late Charles M. Bayer, the Stella Maris’ Campership Fund provided more than $150,000 in need-based scholarships to more than 300 children and their families participating in the various camping programs this year. At least 10 percent of the camp’s enrollment is reserved for families needing financial assistance.