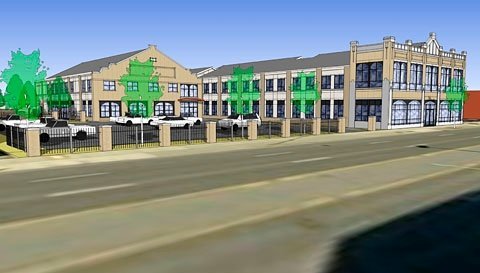 Above is an artist’s rendering of the new Paul Wolk Commons.

ROCHESTER — In a town where nearly everything with "East" in its name can be traced back to philanthropist and Eastman Kodak Co. founder George Eastman, East House stands alone.

Founded in 1966 by a group of community leaders who were concerned that people were being discharged from mental hospitals without an established community support system, East House was named for its initial location on the east side of Rochester.

Yet an announcement July 15 of plans to turn a former Eastman Kodak Co. parking garage on State Street built in 1927 into the newest residence for East House clients has cemented a connection between Eastman and East House.

"We wanted to take a historic part of Rochester and rehabilitate it," said Greg Soehner, president and CEO of East House, a private, nonprofit rehabilitation agency that serves about 1,000 mentally ill and/or chemically dependent clients a year. Soehner spoke just minutes before a groundbreaking to kick off construction at the parking garage.

The new 45-apartment residence will be named Paul Wolk Commons in honor of one of East House’s founders. The apartments will be targeted to residents earning 50 percent of the area median income. Rents will be $572, including all utilities. The building will include space for East House to have an office administration area, a small reception area and a medication room.

The project’s partners are East House Corp.; Providence Housing Development Corp., which is a nonprofit affiliate of diocesan Catholic Charities; and Enterprise Community Investment, which provided a $6.5 million low-income-housing tax credit equity investment. Other financing for the $8.6 million project was provided by New York State Homes and Community Renewal, the New York State Office for Mental Health, the Federal Home Loan Bank Affordable Housing Program and The Community Preservation Corp. The project also will involve the demolition of an auto repair garage on the site for additional parking.

"This is not just a housing project," said Gerald Scott of the state Office of Mental Health’s Western Regional Office. "This is going to be a home for more than 40 people."

East House, which has a budget of more than $7.5 million a year, provides residential rehabilitation services, a mental-health independent-living program, and career and family services programs. The organization serves people with major mental illnesses, such as schizophrenia, affective disorders, as well as chemical dependency, and operates nine group homes, four offices, a career center and more than 200 scattered-site apartments.

Many people have told Soehner that East House saved their lives and gave them hope, he said.

"I couldn’t get up and do my job everyday without the inspiration I get from our clients," he said. "It’s tough having a serious mental illness."

In addition to battling their illness, people with a mental illness often have to confront negative attitudes about mental illness from others in the community , he said, noting that East House clients want the same things as everyone else: a social life, a great place to live, a job, stability and health.

"People see the illness and not the person," Soehner said. "One thing we do a lot of is community education. A person is a person first and the illness is something they have."

Anne McKenna, director of community relations for East House, said many clients need help learning or relearning how to live independently with a mental illness. Some may have been hospitalized, and some may be homeless, she said.

"For a lot of our clients, their lives may have been interrupted by a breakdown," McKenna said.

The property will have 24-hour staffing and security, onsite property management and maintenance, central air, laundry facilities, a community room, a game and television lounge, a library, a fitness center, interior and exterior courtyards, and onsite parking. The apartment building is scheduled to open in the spring of 2012. Interested applicants should contact Providence Housing at 585-328-3228, ext. 1393.

The building also will meet green building standards, including having energy-efficient appliances and heating/cooling systems and lighting and low-flow water fixtures and appliances.

"It’s about reducing utility costs so we can squeeze every penny out of our construction dollars, but more importantly, it’s about the health of residents who live here and it’s about quality of life," said Monica McCullough, executive director of Providence.

East House is attempting to carry out the vision of its founders to provide quality housing for those with mental illnesses, Soehner said.

"We hope this house is a testament to their foresight and their dedication," he said.

Inside the former parking garage and future Paul Wolk Commons, there was evidence that the building is already living up to that aim. There was a stack of cement blocks on hand for groundbreaking attendees to sign before the blocks are incorporated into the construction.

On one block, several members of the Wolk family wrote: "Uncle Paul would be so proud!"