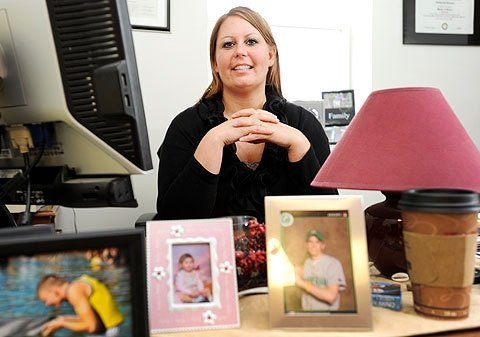 Tabitha Brewster became interim executive director of Catholic Charities of Livingston County in September 2011. In January of this year her position became permanent and was renamed agency administrator.

She grew up with modest means, dropped out of high school, married at age 16, relocated and had her first child at 17.

Drawing from her early-life background, Tabitha Brewster has acquired plenty of wisdom to share with folks struggling toward better futures for themselves.

"They’ll say, ‘How do you know, you don’t understand what I go through.’ I’m able to say, ‘I can understand,’" Brewster remarked, adding that she has lived "what seemed to be an entire lifetime by the time I was 21."

Since beginning in 2007 as a case manager with Catholic Charities of Livingston County, Brewster has repeatedly shared with people served by the agency her personal story of overcoming challenges. Her latest accomplishment: being named head of CCLC.

Brewster, 34, became the office’s assistant executive director a year ago and then interim executive director in September 2011, succeeding Carlos Garcia. In January 2012 her role was made permanent by CCLC’s board of directors with the title being renamed agency administrator.

She is leading an organization that was begun 20 years ago and now serves from its Mount Morris headquarters more than 3,000 people throughout Livingston County who are battling poverty. Brewster said her immediate goal is to secure stronger funding to ensure the continuation of several vital CCLC programs during a difficult financial period.

"The services that we provide are just such a huge asset to the community," she said. "These clients are coming in on a wing and a prayer, and they need just some kind of hope."

Brewster said she learned how to convert hope into opportunity from her past experiences.

"I grew up in an impoverished area (Swain, Allegany County) where my family as a child was considered to be the working class poor. I was always taught that nothing in life comes free and if you want something, you must strive to get it," she remarked.

She married her husband Daniel in 1993 when she was 16 and he was 18; they soon moved to Hawaii due to his military commitments. There she gave birth to their son Bradley, now 17. She earned her high-school diploma in 1994 after having dropped out of school back home. She was initially denied admission to college, but has since obtained her associate’s degree (from Alfred State College), bachelor’s (from Alfred University) and master’s (from Walden University’s online program). Along the way she had her second child, Kaidence, now 7.

Brewster is currently in the dissertation phase of her PhD in psychology through Walden University and plans to obtain her doctorate by next year. She, her husband and children have lived in Livingston County the past 12 years, currently residing in the town of Ossian near Dansville.

Based on her own successes, Brewster said she implores CCLC clients to maximize their potential rather than rely on handouts.

"I’ve just explained to them that it’s not easy, it’s a rocky road — but it can be done," she said. That doesn’t necessarily mean they have to follow in her exact footsteps, but achieve goals in life "to make them comfortable with who they are."

In order to help bring that about, she said it’s important that she and other Catholic Charities employees remain upbeat and compassionate.

"I strongly believe that laughter and kindness can go a long way by encouraging positive thoughts and feelings, resulting in a strong sense of internal motivation," she explained. "Unfortunately, negative stigmas can lead to a downhill spiraling effect. At such a time, those individuals need guidance, support and encouragement to persevere."

Brewster said she plans to continue working directly with clients when time allows — "I’m definitely more of a hands-on manager" — and has arranged her office within view of CCLC’s front foyer "so I can see everybody coming in. I want that interaction."

She’s also coming up to speed quickly as an administrator with the aid of Jack Balinsky, diocesan director of Catholic Charities, who visits the CCLC office twice per week to help her adjust to her new duties.

"I have been blessed with an amazing mentor," she said, adding that "I am excited to take on this challenge as I have an amazing staff, knowledgeable board of directors and community support."