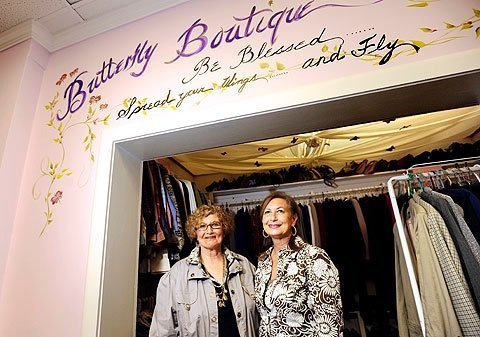 Josephine Gangarossa (left) and Mary Jo Colligan stand inside the Butterfly Boutique, a clothing closet operated by Angels of Mercy, a local charity started by a Colligan.

The bevy of volunteers with the local nonprofit Angels of Mercy have dressed more than 20,000 girls around the world in simple handmade dresses.

And since June they also have been focusing attention on women in need in the Rochester area.

Angels of Mercy has opened up the Butterfly Boutique, a clothing closet in its office at 692 N. Winton Road, to dress women to enter or re-enter the workplace, or for special occasions. Those referred to the service often are in such crises as having addictions, having suffered abuse, having depression, having injured themselves, having eating disorders, or having unplanned pregnancies.

Mary Jo Colligan, founder and president of Angels of Mercy, said one payoff is in seeing the transformation of women helped by the organization: after receiving gently used outfits from Angels of Mercy’s Butterfly Boutique, they often radiate self-esteem and beauty. The hope is that with the clothes, the women can feel like they can start life anew, Colligan said.

She recalls telling one woman who dressed at the boutique that she looked so beautiful. The woman said, "I can’t believe I’m beautiful." As the woman shared her story, Colligan said it was clear that her view of herself was tied up in a lot of pain.

"So many people don’t feel very good about themselves today," she said.

The Butterfly Boutique gets its name from the metamorphosis that Colligan hopes every woman who receives help from it will undergo.

"I really believe every woman should be able to spread her wings and fly and go forth in life," she said.

Women are directed to the clothing closet by nonprofit organizations, pastors or Angels of Mercy affiliates. The women are eligible to receive up to three, free complete outfits, including accessories and new undergarments, every three months.

"We do ask that they make an appointment, because we want to give them the special attention they deserve," Colligan said.

The clothing closet is only one part of Angels of Mercy’s work, she said.

In the last 18 months, the organization has helped to coordinate the production of 20,000 dresses for girls in need in other countries through the Dress a Girl Around the World campaign, and it is the New York state representative for the national organization. The dresses are made from pillowcases and other fabric during monthly marathon sewing sessions at area churches.

Each of the dresses has been sent with missionaries so that a girl can be personally hand-dressed, and the dresses have gone to 15 different countries. The most recent shipments went to El Salvador and Haiti with doctors who were journeying there on medical missions.

"Our goal is to reach the ends of the Earth," Colligan said.

Colligan said her niece, Victoria, helped start a Dress a Girl Around the World chapter at Brighton’s Our Lady of Mercy High School in the fall of 2011, and the chapter has made dolls and collected stuffed animals to put in the pockets of the handmade dresses. Colligan noted she has strong ties to the school as well; she is an alumna and also is an associate of the Sisters of Mercy.

The program also coordinates an annual Valentines for Seniors project to provide hygiene and entertainment items to the seniors at the Shire at Culverton. Additionally, it runs a pasta dinner to raise money for Mercy Community Services’ residential program for pregnant and parenting teens and young adults. The organization also coordinates an annual clothing drive for winter clothing that is distributed to 14 different shelters and other agencies.

Josephine Gangarossa, a parishioner of St. Rita in Webster who volunteers at the Angels of Mercy office, noted that a group of nurses gets together on their day off to make little dolls to put in the pockets of the handmade dresses. She noted that blankets donated by other crafters are given to the nurses to pass on to unwed mothers.

She said clothing constantly streams into the boutique, ready to be used to outfit women with style.

"You’d be surprised how many clothes come in with tags still on them," Gangarossa said.

So much clothing has come in that the agency has taken to temporarily storing it in the kitchen area of the office. More women in need are needed to use the free service, Colligan said.

Josefina Lopez of Rochester, a mother of five who began volunteering at the agency upon the suggestion of staff at the Department of Social Services, said she has referred friends to the boutique.

"Being here, I have been able to help people from my community," Lopez said.

Colligan said she didn’t have such lofty goals when she started the organization as a way to help women break out of crisis. She simply tried to listen to what God was telling her to do, she said.

"I just felt this tug," Colligan said. "It’s about saying yes to the call."

EDITOR’S NOTE: Angels of Mercy’s Fifth Annual Pasta Dinner will be held from 1 to 5 p.m. Sunday, April 22, at Christ the King Parish Hall, 455 Kings Highway South, Irondequoit. Music will be by Len Hawley, and there will be door prizes and raffles. Tickets are $9 for adults and $5 for children 12 and under. Children younger than 3 eat for free. For details, contact the Angels of Mercy office at 585-730-4556 or visit www.angelsofmercyny.org.