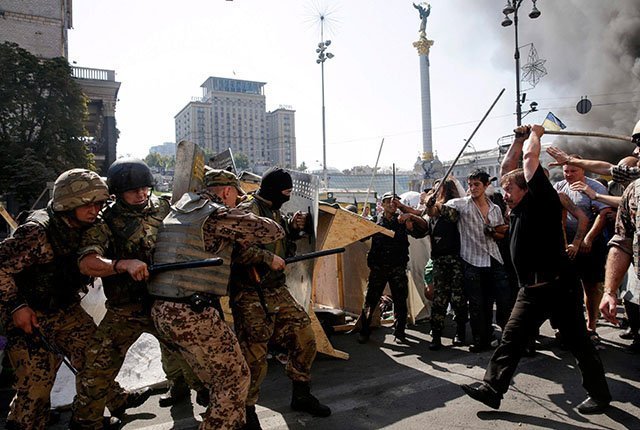 Pro-government forces clash with protesters at Independence Square in Kiev, Ukraine, Aug. 7. Andrij Waskowycz, president of Caritas Ukraine, has warned of a growing humanitarian crisis while the Vatican's nuncio also highlighted the worsening plight of Catholics because of the country's conflict.

WARSAW, Poland (CNS) — The head of Caritas in Ukraine warned of a growing humanitarian crisis in the country’s east, as the Vatican’s nuncio also highlighted the worsening plight of Catholics in the country’s conflict.

Fighting continued between pro-Russia separatists and Ukrainian government forces in early August. Russian President Vladimir Putin banned food imports from countries that had imposed sanctions on Russia over the crisis.

Waskowycz said he believed the preoccupation with sanctions had diverted international attention away from Ukraine’s humanitarian crisis.

He added that his charity was grateful for expertise and material help from partner organizations, including the U.S. bishops’ Catholic Relief Services, but said contingency plans were now urgently needed for coping during the coming winter.

"Ukrainians have been killed and maimed for months, but only when EU citizens were killed did people realize a war was being fought here," said Waskowycz, who is also vice president of Caritas-Europe.

"Even now, I still don’t see a real readiness by the international community to support the humanitarian organizations here in addressing this crisis. Attitudes have to change," he said.

Waskowycz said he had recently visited Sloviansk, where efforts were underway to restore essential services, reopen schools and repair 2,300 damaged homes after the city of 120,000 was recaptured by Ukrainian forces in late July. He said Caritas had helped reconnect water and power supplies in towns under government control, but was unable to provide assistance in separatist-occupied areas.

"Insecurity and violence prevail in conflict areas, resulting in a steady worsening of the humanitarian situation," the Irish official told an Aug. 5 U.N. Security Council debate. "This will continue to deteriorate for as long as violence persists."

In website reports, Caritas-Ukraine said it had appealed for food, water containers, hygiene supplies, cooking equipment, blankets and warm clothing for refugees from the fighting, as well as for help with psychological and legal counseling.

Among other cases, it said a pregnant women with seven children had been temporarily rehoused by Caritas in Lviv after leaving family members in Russian-occupied Crimea, while another woman had fled eastern Ukraine with her small children and disabled parents after her husband was held hostage and "tortured" by separatists.

Meanwhile, the Vatican’s Kiev-based nuncio, Archbishop Thomas Gullickson, said the conflict had drawn some people "to a more consistent Christian way of living," but had also been "terribly destabilizing."

"If the country remains destabilized, we may see the Roman Catholic presence in Ukraine practically disappear — as it is, it’s small and in danger, but how can parents ask their children to stay in a country with no prospects?" Archbishop Gullickson told Vatican Radio Aug. 6.

"The Greek (Byzantine) Catholic Church is even more at risk, but for different reasons — in terms of persecution from the side of Russia and others who’ve never really accepted the reality of this beautiful church," he said.