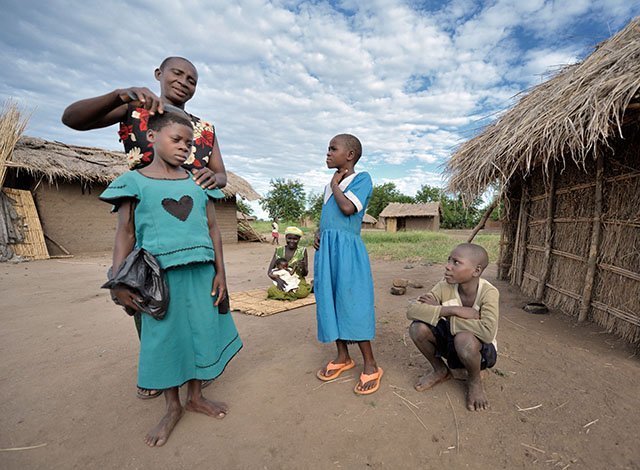 Hilda Simon prepares her granddaughter, Annie, 10, for school in 2011 at a village in Chikwawa, Malawi. With the highest levels of HIV prevalence globally, southern African countries have seen families torn apart by AIDS, with children left to raise younger siblings and sick children left in the care of elderly grandparents.

"AIDS is one of the biggest factors affecting the quality of family life" in the region, Bishop Kevin Dowling of Rustenburg, vice chairman of the Southern African bishops’ justice and peace department, told Catholic News Service.

Approximately 15.1 million children who have lost one or both parents to AIDS live in sub-Saharan Africa, according to the United Nations. In Zimbabwe, 74 percent of all orphans are orphaned because of AIDS, and this is the case with 63 percent of orphans in South Africa.

Bishop Dowling told Catholic News Service that a common situation in communities hard-hit by HIV is girls heading households of three or four younger siblings. The church has set up programs for such families throughout the region with "well-trained and highly committed child care workers, because these vulnerable families need great attention," he said.

"The church is seriously challenged to find ways to create even a minimal quality of family life for child-headed households," Bishop Dowling said.

The bishop also said extreme poverty and unemployment are at the root of the problems of AIDS and violence, which severely harm families in the region. An extraordinary Synod of Bishops at the Vatican in October will consider problems facing the world’s families.

"Many AIDS orphans were born HIV-positive, and we ensure that they are on antiretroviral treatment and that their health is stabilized before seeing to their needs regarding school," Bishop Dowling said.

In his diocese, "we have set up an after-school center where the children get a cooked meal after school and are helped with their homework," he said, noting that this helps to "build up dignity, self-esteem and a sense of family with the child care workers."

More than 6.4 million South Africans in a total population of about 51 million are HIV-positive.

Bishop Dowling said the quality of family life in South Africa largely depends on education and jobs, "because without these there is little hope." In extreme poverty, "people think only of their survival for the next 24 hours," he said, noting that as a result "homes are violent and children grow up without self-worth or knowing how to treat others with respect."

"Young and vulnerable women are another huge challenge for the church in the face of AIDS," Bishop Dowling said, noting increasing numbers of women moving from other countries as well as from poor rural areas within South Africa into shack settlements around the mines in the north of the country.

"Thousands of women here have no extended family environment and survive by having transactional sex with miners," he said.

With government and nongovernmental organizations, the church is setting up development programs that provide skills training "so that women can leave this brutal and degrading situation and survive through their own work," he said.

In Zimbabwe, family life is harmed by the separation caused by adults moving to neighboring South Africa and Botswana to seek work, "leaving children behind in the care of others," said Jesuit Father Oskar Wermter, a priest at St. Peter’s Church in the Harare suburb of Mbare.

Migrants from Zimbabwe "find it very difficult to take their children with them unless they have secured good jobs," Father Wermter told CNS in a telephone interview from Harare. He added that "often their new livelihoods are precarious, and they continue living in poverty."

Separation of families through migration can also increase the HIV-infection rate "with men who acquired the virus while away infecting their wives on their return home," he said.

Many Zimbabwean children whose parents have died of AIDS-related illnesses are raised in extended families, Father Wermter said, noting that "for children who do not have these safety nets, there are even greater difficulties."

A center set up by Little Company of Mary Sisters in Harare to care for families affected by AIDS has had to stop its feeding program because of funding cutbacks, said projects coordinator Faith Majome.

Since the program ended in April 2013, staff at the Mashambanzou Care Trust in Harare "do what we can to empower people to earn a dollar or two a day so that they can put food on the table," she said.

She said HIV-positive patients have to pay up to $15 a year to attend clinics in Zimbabwe, and many cannot afford the fee because they are not working.

"They then don’t get the treatment they need and become unable to feed their families," Majome said, noting that a major problem is relatives and friends "running away because they can’t, or don’t want to, support extra people."

In the Valley of a Thousand Hills in KwaZulu-Natal, the South African province hardest hit by AIDS, more than 2,000 grandmothers are supported in a project to raise their grandchildren after their children’s AIDS-related deaths.

Cwengi Myeni, a nurse who heads the grandmother project in the Hillcrest Aids Centre Trust, said most of the grandmothers are widows. She said many men were killed in the violence in the province before the election that ended apartheid in 1994.

"Even where men are around, it is the women who do the caring for children," Myeni told CNS.

The grandmothers want income-generating projects and are taught how to sew and grow vegetable gardens, Myeni said.

"We’re even helping them to build their own houses," she said. "They are buying cement with their pension money and making the bricks they need to build houses that are better than the mud houses they have now."