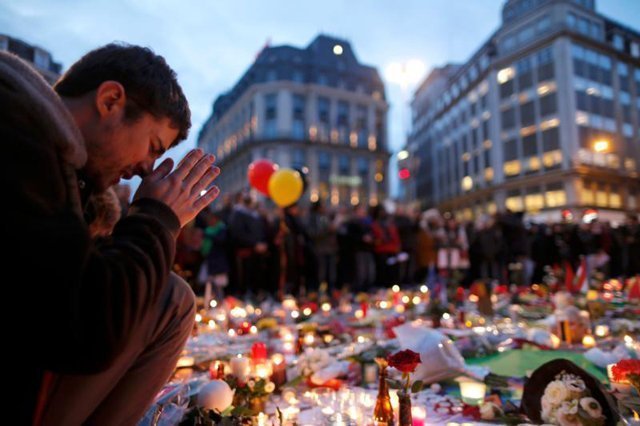 A man prays during a March 23 memorial gathering in Brussels following bomb attacks the previous day. Three nearly simultaneous attacks claimed the lives of dozens and injured more than 200.
By Jonathan Luxmoore
Catholic News Service
OXFORD, England (CNS) — A Catholic priest who ministered to survivors of the attacks at Brussels airport said he was struck by the "profound humanity" shown by those caught up in the situation.
"I’ve heard so many stories, including testimonies from those who were 15 yards away when the bombs exploded, and who were blown off their feet and injured," Father Michel Gaillard, chaplain of the Belgian capital’s Zaventem airport, told Catholic News Service March 24.
Father Gaillard said he had been traveling to Zaventem when the bombs exploded and had helped calm hundreds of passengers taken to a nearby sports hall. Many lost passports and luggage and were desperately seeking friends and relatives, he said.
He added that he had helped counsel numerous Catholics who sought his support, as well as American tourists, students and employees who were at the airport during the March 22 rush-hour blasts. He said Orthodox, Protestant and Jewish airport chaplains also had offered spiritual and pastoral help to those affected.
"Some people have asked me to pray with them and for them, while others have just needed to talk about what happened to them," the Catholic chaplain said.
"In a world where finance is often considered the most important thing, this event has reminded us of our vulnerability — as well as of the bonds of profound humanity we reveal in showing care and compassion for each other. This is the great lesson I take from what’s happened."
"We should remember the airport is a large community, all of which has been affected," he added. "Although people are still in shock, I’m moved by how many have placed themselves at the service of the injured and traumatized."
Father Gaillard, who has served as a chaplain at the airport for 10 years, said he was hoping to get a list of all the injured and visit each of them.
Belgium’s Health Ministry said March 24 more than 60 people remained in critical condition after explosions at Zaventem and the city’s Maelbeek metro station.
"Most of those affected here were common, simple people, catching planes for holidays, to visit family members over Easter or to do their jobs," he said.
"We’ll have to see if this dreadful event makes people more open to the values of faith — that’s a question for tomorrow, whereas what matters today is aiding friends and colleagues," he told CNS.
Father Gaillard said he was aware media discussion had turned toward the failure of Belgium’s security services and the government of Prime Minister Charles Michel to predict the attacks, for which the Islamic State group claimed credit. However, he said police and officials at the scene should be thanked for "showing courage and doing their best."
"Instead of making negative assessments, I think we should thank the police and medical staff who’ve done such a huge job in the face of such difficulties."
The previous night, Father Gaillard and Auxiliary Bishop Leon Lemmens of Mechelen-Brussels joined other Christian leaders at the Catholic church in Zaventem, outside Brussels. The Belgian church’s Cathobel news agency said Bishop Lemmens had thanked airport staff and local residents for the "solidarity and closeness" shown to the 11 killed and dozens injured by the airport bomb blasts.
Copyright © 2023 Catholic News Service, Inc. All rights reserved. Linking is encouraged, but republishing or redistributing, including by framing or similar means, without the publisher's prior written permission is prohibited.