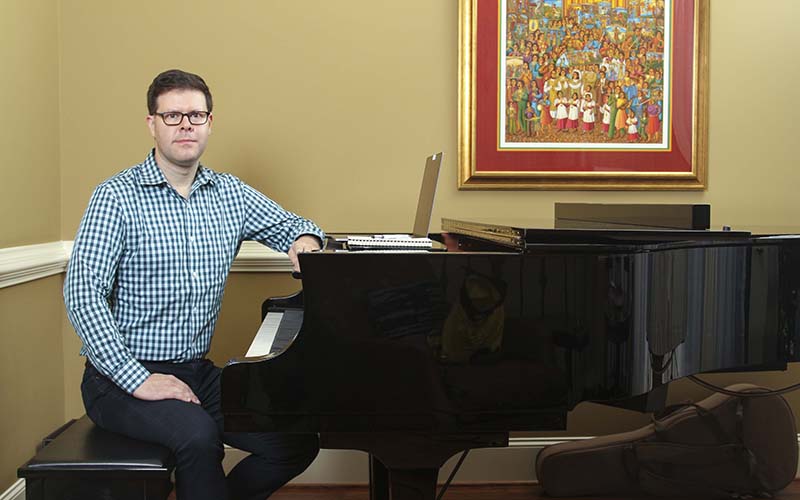 Tony Alonso, assistant professor of theology and culture and director of Catholic Studies at Emory University in Atlanta, sits at the piano in his Decatur, Ga., home Oct. 19, 2020. His album, "Caminemos Con Jesús/Let Us Walk With Jesus," has been nominated for a Latin Grammy in the category for Best Christian Album (Spanish Language). (CNS photo by Michael Alexander/The Georgia Bulletin)

DECATUR, Ga. (CNS) — When Tony Alonso imagines the choirs and believers in the pews singing his music, it isn’t polished musicians hitting every note he envisions, but the imperfect, faith-filled women and men who sing to share God’s gift of their voices, no matter the talent.

“My heart is with untrained folks singing together,” said the author of hundreds of original pieces of hymnal music across denominations throughout the world.

“Scripture is filled with biblical commands to sing. And those commands don’t come with any caveats. I see my work fulfilling that mandate,” Alonso told The Georgia Bulletin, newspaper of the Archdiocese of Atlanta.

The Emory University assistant professor directs the Catholic studies program at the Candler School of Theology.

As a composer, he has more than 20 collections of music to his name. His newest work honors his Cuban roots and has been nominated for a Latin Grammy in the Best Christian Album category. The award winners will be revealed Nov. 19.

He spoke about the nomination sitting in a park outside of his Decatur townhouse and in emails.

The nominated album, “Caminemos con Jes√∫s/Let Us Walk with Jesus,” overflows with Cuban flair. His songs echo Pope Francis’ calls for a faith where encountering others and accompanying them on life’s journey with its joys and problems is “the primary form of Christian life.”

The faith “doesn’t imply hierarchy, but co-working in the vineyard of the Lord,” said Alonso, who also is a theologian. The album’s themes mirror St. Luke’s Gospel story of the journey to Emmaus, where believers are “sharing the sorrows and the heartbreaks,” he said.

What is it about Cuban music that lends itself to the themes of Pope Francis? Alonso said one genre of music isn’t better than others, but it is about “being open to the diverse ways in which people reach toward God in song.”

He said the style of “son Cubano” in liturgical music has been underexplored.

“I hope to simply offer another way to praise God in song alongside many others,” he said.

Added Alonso, “I am convinced that God loves variety. This album is a different way of expressing prayer than others.”

His grandfather and grandmother emigrated from the Cuban Revolution to the United States when his father was 6. The family settled in Miami for a time, but later moved to Minnesota, where his grandfather taught Spanish at a small Catholic college.

Alonso’s father attended high school and met his future wife. Alonso joked they were likely the only Hispanics in the town at the time, certainly the only Cubans.

Alonso’s childhood was spent between the North Star State and Florida, where he was born. He has a younger sister. His father worked his way up from an entry-level position at a food company to become an executive.

The family’s faith life was shaped by his Cuban heritage and his Minnesota-born mother’s “Midwestern sensibility.” For instance, Christmas with his mother’s family was about organ and brass at midnight Mass, while in Florida, the holiday meant guitars at Mass, small choirs of women singing, roasted pig and black beans, he said.

“I think it’s one of the great blessings I had these two very different experiences of what it meant to be Catholic,” said Alonso. “I feel like I have a generous heart when it comes to the many expressions of Catholicism.”

As a youngster, Alonso sang in his fourth-grade choir, and as a high schooler he led a parish choir. He studied music at Chicago’s Northwestern University, serving in bilingual parishes in the city.

After graduation, he moved to California to work at Loyola Marymount University to lead the music at the school chapel and earned a master’s in liturgical theology, which is the study of Christian worship. He attended Emory University for his doctorate.

He lives in a townhouse a couple of miles from campus, a grand piano filling his living room. His walls are covered in devotional art depicting Our Lady of Guadalupe and other images of Mary.

On Sundays, before the arrival of the pandemic, he worshipped at Immaculate Heart of Mary Church in Atlanta, helping on the piano when necessary, or at the parish church closest to his home St. Thomas More Church in Decatur.

The Candler School of Theology’s Catholic studies program at Emory is unique. Atlanta is the largest Catholic community without a Catholic university to educate ministry leaders, and the program aims to serve the faithful, he said.

There are roughly 1.2 million Catholics in the 69 counties of the archdiocese, with a population that is nearly half Hispanic.

Alonso, 40, said the value of studying faith at Emory is working alongside other Christians, which prepares graduates for parish ministry in collaboration with Methodists, Baptists and other churches.

Music and singing are “deeply central” parts of worship, whether done by trained professionals or a weekend choir with no training. Communities “express the deepest emotions” in faith as the assembly sings together, he said.

However, church choirs have been silent after a rehearsal in Washington state early in the pandemic became a virus hot spot. Over 30 confirmed cases of COVID-19 erupted after a practice. Two choir members died.

Alonso said he shares a “deep lamentation” about the absence of parish singing, but it is important for health reasons.

As for Latino church music, Hispanics generally embrace folk music played on instruments like guitars and it comes “from the heart for the people.” It is “unapologetically participatory,” he said.

Many of the beloved songs for Spanish-speaking Catholics come from Mexico or Spain, he said.

His goal for the album was not to “add God to Spanish music and stir.” Alonso said he aimed to recapture the sounds of the Cuban music he heard years ago when his grandfather “assigned Cuban albums as if it was homework.”

“Caminemos con Jes√∫s” features 11 songs, with nine original pieces. They mix Spanish and English lyrics in a style called “son Cubano,” a mixture of Spanish sounds and African rhythms, rooted in the island’s countryside. It is the foundation of salsa.

“Part of the joy of this project was imagining new ways of expressing ancient texts,” said Alonso. “I believe God speaks through son and salsa as much as anything else. I hope this makes people want to move.”