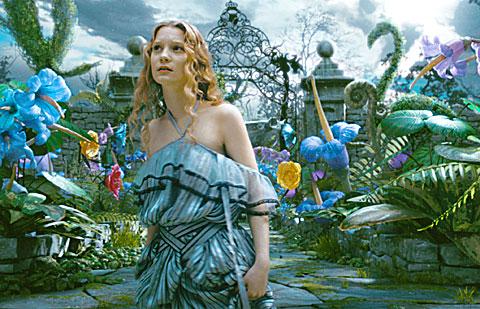 NEW YORK (CNS) — The prospect of being led through Lewis Carroll’s looking-glass by director Tim Burton is liable to fill Catholic moviegoers with a mixture of excitement and apprehension. While eagerly anticipating how the talented Burton will render the world imagined in "Alice’s Adventures in Wonderland" (1865) and "Through the Looking-Glass, And What Alice Found There" (1872), one also fears Burton might overwhelm Carroll’s literary touchstones with his macabre sensibility.

Very loosely inspired by, but not recklessly departing from, those two influential books, "Alice in Wonderland" (Disney) — which mixes animation and live action — is neither an occasion for dread nor a cause for elation. Presented in 3-D, the movie’s aesthetic impact is lessened by the lack of a coherent style and visuals that never take your breath away. On the plus side, it’s not as dark or unsettling an entertainment as might be expected from the filmmaker behind the unrelentingly bloody "Sweeney Todd," the morose "Corpse Bride" or the ghoulish animated feature "The Nightmare Before Christmas."

Even so, the youngest audience members are likely be frightened at times; and the potential exists for viewers of all ages to be flummoxed by certain passages. Such is the nature of Carroll’s nonsense classic. But — besides being a visual hodgepodge and not especially dazzling to the eye — the movie also underwhelms by obscuring the verbal whimsy. Though there are humorous bits, the fairy tale’s gobbledygook charm has been muted in favor of an adventure story line centering on a brave, grown-up heroine.

In contrast to Burton and his technical collaborators not being able to find their footing designwise, screenwriter Linda Woolverton succeeds in fashioning a proto-feminist story, albeit one that generally retains Carroll’s Christian outlook. The first step Woolverton took toward that end was making Alice (Mia Wasikowska) a 19-year-old. Prior to tumbling down the rabbit hole, Alice is shown being pressured into an arranged marriage with an aristocrat. Fleeing the garden party where the engagement is to be announced, she arrives in a subterranean realm called Underland, a truly strange environment yet one familiar from the recurring dreams she’s had since she was a child.

There, Alice encounters Tweedledee and Tweedledum, the Mad Hatter (Johnny Depp, in his seventh collaboration with Burton), and various frazzled fauna such as the White Rabbit, the Cheshire Cat, the Dormouse and the Blue Caterpillar. The Red Queen (Helena Bonham Carter) is in power, having feuded with her sister, the White Queen (Anne Hathaway). Aided by the Knave (Crispin Glover), this childish despot has enslaved the animals and visited a chaotic blight upon Underland.

Alice is compelled to end the Red Queen’s reign of terror by vanquishing a dragon called the Jabberwocky. Much as the Pevensie children are in the two recent "Chronicles of Narnia" movies, she is a savior figure with latent martial skills. Alice is also an intellectual rebel who challenges convention, all the while concerned about her own mental stability, given the bizarre experiences she’s having.

Lewis Carroll was the pen name of the Rev. Charles Dodgson, an Oxford mathematician, and the broad strokes of Rev. Dodgson’s High Anglican faith are discernable in the film. Most prominently, well before Alice — clad in armor and blond locks flowing — appears to fell the Jabberwocky, parallels to St. Joan of Arc are unavoidable. In addition to the French warrior, Alice can be interpreted as the female equivalent of England’s dragon-slaying patron, St. George. Her story comes to a more pleasant earthly end than either martyr’s did, however. At the conclusion of "Alice in Wonderland," she is depicted as an intrepid explorer with an innovative, entrepreneurial streak.

Along with the overhauled plot, the movie’s Disney imprimatur may account for Burton’s restraint. For example, he refrains from teasing out any drug references or otherwise indulging in the more surreal, avant-garde qualities that have drawn many artists to "Alice in Wonderland" over the years.

The film contains many elements of fantasy action and violence that might scare young children, including a skewered animal eyeball, human characters striking one another, images of mild animal cruelty, some discussion of beheadings, as well as a character smoking a water pipe and one instance of light profanity. The USCCB Office for Film & Broadcasting classification is A-II — adults and adolescents. The Motion Picture Association of America rating is PG — parental guidance suggested. Some material may not be suitable for children.