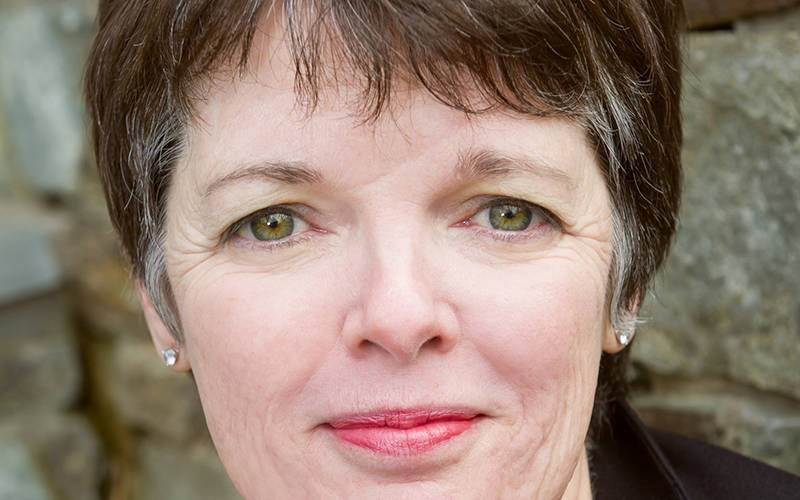 By the time you reach Page 4 of Alice McDermott’s stunning book, “The Ninth Hour,” a man is speaking the words of the “Hail Mary” as he dies.

Is Alice McDermott a Catholic writer? Her faith background permeates her work. And no one who grew up Catholic, especially those of “a certain age” who lived through the ecclesial changes of the second half of the 20th century, can fail to be moved by her stories.

And yet, like all great writers, her themes are universal. Lost love, lasting love, the confusion and sorrows of childhood, the fragility of people, the coming to terms with sexuality, the inevitability and surprise of death — McDermott weaves common stories in an uncommon way.

Born into an Irish Catholic home in Brooklyn in 1953, Alice McDermott wrote even as a child. She told an interviewer in the journal Image that, in her first creative writing course, the professor told her, “I got bad news for you, kid. You’re a writer, and you’re never going to shake it.”

That was good news for the millions of readers of her eight novels.

McDermott’s list of achievements is long. Three of her novels were finalists for the Pulitzer Prize. “Charming Billy” won the National Book Award for fiction in 1998. Her novels routinely make the “Best fiction of …” lists for whatever year they’re published.

In “The Ninth Hour,” which begins against the dreary background of immigrant tenements in Brooklyn in the early part of the 20th century, we meet a character that might just live with the reader forever. Sister St. Saviour is a member of a nursing order that works the poverty-ridden streets, visiting the ill, caring for the homebound and meeting the needs of the neighborhood.

Sister St. Saviour, however, is nearing the end of her vitality and usefulness. Consigned to a day of begging for alms at the local Woolworth’s, on her way home she encounters a fire, a tragedy and a commitment. Despite her swollen ankles and her desperate need to empty her bladder, she responds to the young widow she encounters.

The wife of a man who has taken his own life has a burial plot in the Catholic cemetery. Alas, suicides were not allowed in sacred ground back then, but Sister conspires with the mortuary owner to bury him quickly as an accidental death. Her plans are thwarted when a newspaper quickly prints a story revealing the suicide.

It’s characters like these that animate all of McDermott’s novels. They are ordinary people. But everyone has a story, and McDermott has the rare gift of reminding us that each ordinary life tells an extraordinary story.

Sister St. Saviour doesn’t remain on the pages long. The widow Annie, her daughter, the nuns in the big old house bequeathed to the order by a rich man — they all have a story. The bonds between mother and daughter, the search for love, the search for vocation, all are explored with sensitivity and passion.

And what Catholic could read “The Ninth Hour” without thinking, “Once I knew a nun just like Sister Lucy.” Or Sister Illuminata. Or the priest in his vestibule (“chilly, despite the June weather, and as dim as winter”), on his way to a Holy Name meeting.

McDermott nails the Catholic milieu in which she writes. Dead on.

And she nails the changing church and the ways people adapted to things that changed and things that remained eternal.

In her book, “Someone,” we follow the life of Marie Commeford, a little girl born in Brooklyn. We see life on her street in its grittiness and in detail. There’s the Syrian-Irish couple next door, and their clumsy daughter Pegeen. There’s blind Bill Corrigan, who was gassed in the war, sitting outside on a kitchen chair his mother puts him in on nice days. We see Marie slip out in the evenings with her father, who craves a drink at the speak-easy in the alley as Marie waits under the streetlight.

McDermott’s attention to detail is precise, yet many things are left subtly to our imagination. The alcoholism, the ambiguity of sexual identity in the days when gays were closeted, all these are laid gently upon the reader.

McDermott is very kind to her characters, and even the ones who mistreat Marie as she grows into womanhood, and eventually old age, are met with understanding. Their inner lives, their struggles, the goodness within, are revealed along with their failings.

In the interview with Image, McDermott is clear about her own love for the church, a faith in which she raised her three children.

She echoes what many readers would say about being Catholic: “It’s what you are.”

(Effie Caldarola is a columnist for Catholic News Service and a freelance writer.)