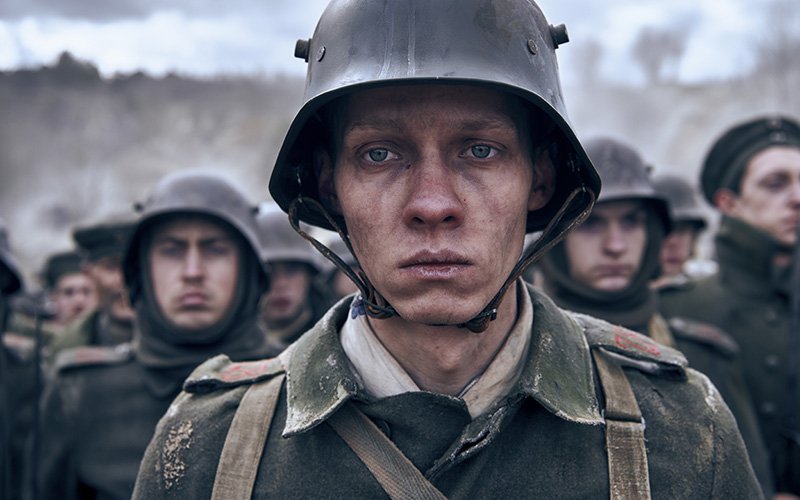 Felix Kammerer as Paul Bäumer in “All Quiet on the Western Front.” (Courtesy of Netflix)

NEW YORK – German author and World War I veteran Erich Maria Remarque’s classic novel “All Quiet on the Western Front” first appeared in serialized form in 1928. Published as a book the following year, his tale became a runaway bestseller, not only in Germany but around the globe as well.

Hollywood’s 1930 screen version, helmed by Lewis Milestone, was the first such adaptation to win the Academy Award for Best Picture (then termed “for Outstanding Production”). Delbert Mann’s 1979 made-for-TV film – a joint British and American project featuring a high-profile cast – also was lauded, receiving both a Golden Globe and an Emmy.

Four-and-a-half decades on, director and co-writer Edward Berger’s eponymous production is streaming on Netflix. While viewers of faith will welcome the pacific theme of his movie, as inherited from Remarque, they should be aware, going in, that it details the horrors of trench-based combat unsparingly.

As the action kicks off in the spring of 1917, high school student Paul Bäumer (Felix Kammerer) and his circle of friends are swept up in patriotic fervor and rashly enlist in the German Army. Their naïve enthusiasm is quickly transformed into terror and misery, however, by the conditions they encounter on the battlefield.

As they strive to adjust to their horrifying new environment, Paul and his buddies receive guidance from a seasoned and cynical comrade, Stanislaus “Kat” Katczinsky (Albrecht Schuch). And, in fact, by the time the storyline fast-forwards 18 months to the last days of the struggle, the lads themselves have become hardened.

Even as peace approaches, the soldiers remain pawns in the hands of their nation’s divided leaders. Thus, although some politicians – personified here by Centre Party leader Matthias Erzberger (Daniel Brühl) – gradually accept the need for an armistice, pampered and fanatical Gen. Friedrich (Devid Striesow), under whom Paul serves, remains determined to keep his men fighting to the bitter end.

The script, which Berger penned with Lesley Paterson and Ian Stokell, emphasizes the stark lesson Paul learns about the shared humanity of warriors on both sides of the conflict. But it also showcases as a token of the civilized life he and his pals have left behind – and to which they naturally long to return – a perfumed scarf obtained during a casual liaison with a local Frenchwoman.

Perhaps Remarque’s work, overall, has become a victim of its own success. At this remove, Paul comes across more as an archetype than an individual while his creator’s anti-war message has been echoed so often that it feels hackneyed.

Still, those grown viewers willing to immerse themselves in the madness against which Remarque so powerfully protested will find affecting moments to cherish amid the squalid slaughter.

In German. Subtitles or dubbed into English.