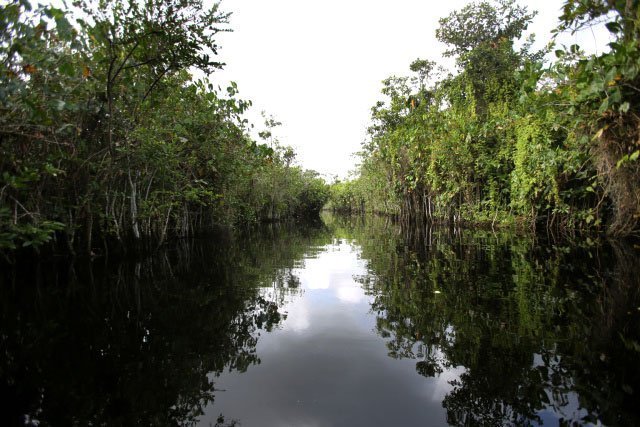 Trees line the banks of a creek along the Pomeroon River in the interior of Guyana. The Catholic Church supports the efforts of scientists to study the causes and effects of climate change and insists governments and businesses must get serious about specific commitments for protecting the environment.

VATICAN CITY (CNS) — Democracy must return to politics and unusual alliances must form in order to get the world to reduce greenhouse gas emissions and tackle poverty, said a panel of speakers attending a Vatican conference.

But as people band together for change, world leaders will have to commit to real binding action at upcoming global summits on climate change and development because "there is zero tolerance for yet another failure being dressed up as a success for the cameras," said Naomi Klein, a Canadian social activist, author and filmmaker, who was invited to speak at the Vatican.

The Pontifical Council for Justice and Peace, together with the international alliance of Catholic development agencies, CIDSE, presented the aims of a jointly sponsored meeting at a news conference July 1.

Titled "People and Planet First: the Imperative to Change Course," the July 2-3 meeting will seek to offer alternatives to current economic models that damage creation by bringing together 200 active leaders in the church, science and society for debate.

The gathering is using Pope Francis’ recent encyclical, "Laudato Si,’" to guide reflection and a plan of action, the panel at the news conference said.

The papal document is "courageous," said Klein, because it challenges the "dominance-based world view" in an age that "lacks political courage."

"We’re all used to politicians just backing down at the first sign of controversy," but there will be controversy when there are such powerful interests supporting the status quo, said Klein, who has been outspoken against unregulated capitalism and worker exploitation.

Describing herself as a "secular Jewish feminist," she said the encyclical deeply resonated with her, yet "it was a complete surprise" the Vatican invited her to speak at its gathering

Seeking to engage activists and experts who agree with the church on certain aspects of social justice, but not on other key life issues, the Vatican made "a particularly courageous decision to invite me here."

"I think it indicates that the Holy See is not being intimidated and knows that when you say powerful truths, you make some powerful enemies," she said.

Responding to concerns the Vatican would invite a speaker who opposed the Catholic Church in her support of artificial birth control, Klein said her speaking at a conference targeting poverty and climate change was "an alliance on a specific issue, not a merger."

"When you are faced with a crisis of this magnitude," concerning poverty and global warming, "people have to get out of their comfort zones" to join forces, she said.

Bernd Nilles, secretary-general of CIDSE, said "we need to build these unusual alliances" in order to unite the broadest base around "one very important question to humankind."

"We as Catholics alone, the Catholic Church, we cannot stop climate change, we cannot protect all people alone, we need to collaborate with all faiths, with all kinds of people who really want to make a difference," he said.

Cardinal Peter Turkson, president of the pontifical council, wrote in his introductory remarks that democracy needed to be re-established in today’s "political dimension" in order to let the people, rather than special interests, have "control over the economy and finance."

His remarks, which were read aloud at the news conference since he was unable to attend, said the biggest obstacle to change was not a lack of economic, scientific or technological progress or knowhow, "but rather (something) within our minds and hearts."

"Read it and let it into your hearts" because "today we have only two roads in front of us: difficult yet humane and easy yet reprehensible," she said.