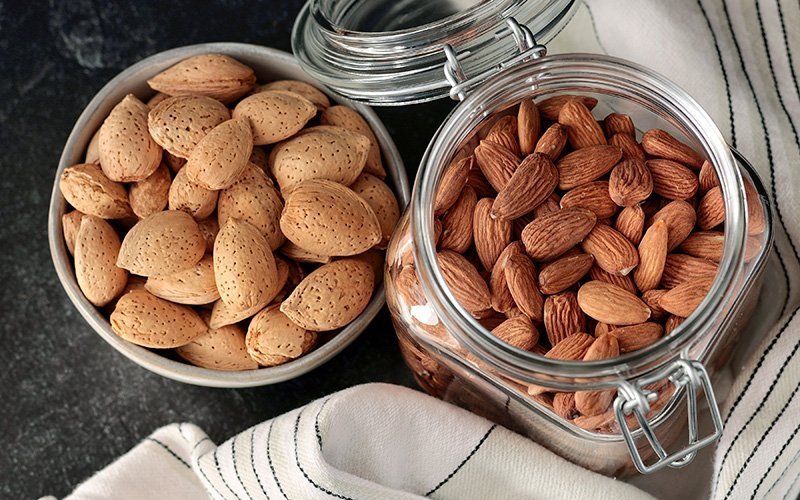 The almond is a drupe -- a fruit akin to a peach, plum or cherry. The kernel inside the shell is the part we eat. (CNS photo by Nancy Wiechec)

This is the second in a eight-part series called “Food from Scripture.”

From the first winter bud to the harvest of pockmarked shells in late summer, almonds take time to mature.

One needs to understand the almond’s cycle to appreciate its appearance in Scripture, says Marc Turnage, a biblical scholar, author and travel guide.

“God fulfills his word, in spite of the circumstances or situations of life. He is patient and calls upon us to remain patient for his word to be accomplished,” Turnage writes in his blog.

Similarly, the almond blossoms early and first, yet waits until the end of the growing season to bring forth fruit.

The prophet Jeremiah says he saw a branch of the almond tree when the word of the Lord came to him. The Lord said to Jeremiah, “You have seen well, for I am watching over my word to carry it out” (Jer 1:11-12).

In Hebrew Scripture, the passages use an alliterative play on words. “Shaqed” is the Hebrew word for almond tree, while the verb for watching is “shoqed.” The New American Bible, Revised Edition, notes that because the almond tree blooms in late winter it is called “the watcher” for the coming spring. God is a watcher by observing the fulfillment of his word.

The almond also represents divine favor because of the miracle of Aaron’s staff described in Numbers (17:23). “By Aaron’s rod, sprouting, blossoming and bearing almonds in one night, God definitively demonstrated to the Israelites that Moses and Aaron were his chosen, appointed servants,” notes Turnage.

Other indications of the almond’s regard come from Genesis where they are mentioned alongside pistachios as the “land’s best products” (Gn 43:11) and from Exodus when God prescribes the cups of the menorah to be shaped like almond blossoms (Ex 25:33-34, 37:20).

Although almond doesn’t appear in New Testament texts, its white and pink flowers and its shape show up in Christian art as symbols of the Resurrection, divinity and purity.

We refer to the almond as a nut, but it’s a drupe — a fruit akin to a peach, plum or cherry. The kernel inside the shell is the part we eat. The shell is covered by a green fuzzy outer hull that dries and cracks open before harvest. This shedding process, which brings forth the potential of new life, may be why the almond stands to represent resurrection.

Almonds are not native to America. Like figs, they were brought to California by Spanish missionaries. Today, California is the top almond producer, growing about 80% of the world supply.

In this recipe, the almond is the star. A touch of honey and a Middle Eastern spice blend complement the nut-like kernel with sweet, herbal and citrus notes. These would be excellent added to a cheese and fruit platter or scattered on a spinach salad.

Heat the oven to 350 F. Line a rimmed baking sheet with parchment paper.

In a large bowl, whisk together the first five ingredients and then mix in the almonds until they are evenly coated. Spread the mixture in a single layer on the prepared baking sheet.

Bake 10-15 minutes until nuts are fragrant and golden. Give the nuts a stir halfway through roasting.

Remove pan from the oven and let cool for 10 minutes.

Store in an airtight container at room temperature for up to a week.

Note: Za’atar can be found in Middle Eastern markets and online. You can make your own by mixing together 1 teaspoon salt with 1 tablespoon each of dried thyme, ground coriander seed, sumac, ground cumin and whole toasted sesame seeds.