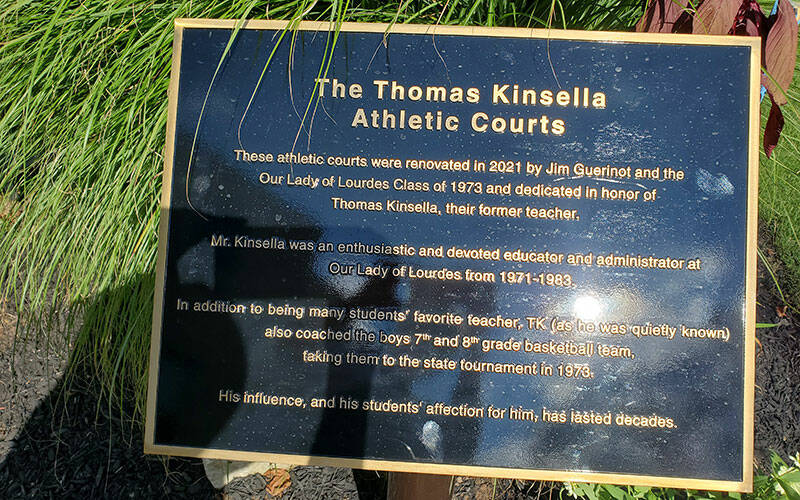 A plaque dedicated by Our Lady of Lourdes alum, Jim Guerinot, in honor of teacher and basketball coach Thomas Kinsella. (Photo courtesy of Christina Mancini)

Although Jim Guerinot moved out of state before he could graduate from Our Lady of Lourdes School in Brighton in 1973, his time at the school and the people he met there continued to influence his life.

Guerinot, a music industry executive who owns the California entertainment company Rebel Waltz, said he found his passion and love for music at Our Lady of Lourdes. He attended the school — now Seton Catholic School — through the seventh grade and moved to California with his family the summer before starting eighth grade.

Guerinot said that at first he was excited to be moving to a new place, but by the fall, he found himself missing his old neighborhood, friends and school. He wound up staying in touch with classmates over the years, and he credits his former music teacher and basketball coach, Thomas Kinsella, with showing him the power of music, specifically in lyrics.

“He plays ‘My Sweet Lord’ (by George Harrison) for us, and not only does he play that song and talk about it from a spiritual point of view, he points out that the beginning starts with ‘Hallelujah’ … and by the end, George Harrison is signing ‘Hari Krishna.’ … So, all of a sudden, this guy is having an interfaith discussion in a conservative environment,” Guerinot told the Catholic Courier Sept. 10.

While planning a Zoom reunion with fellow classmates during the pandemic, Guerinot said the timing felt right to make a donation to Seton in honor of Kinsella. He had made his first donation to the school in the late 1990s to create a computer lab.

Guerinot reached out to Seton Principal Patricia Selig to ask what the school needed, and Selig mentioned that the athletic courts needed updates. Remembering his time at school, Guerniot thought it would be a fitting gesture to help fund the athletic courts renovations and honor Kinsella by dedicating the work in his name. The donation for the project is the largest gift Seton has received.

“He was the first male figure most of us had apart from our fathers,” Guerinot said of Kinsella, explaining that most Our Lady of Lourdes teachers were women religious, so the only male authority figure in his life up until then had been his father. “Then I meet this guy, he’s 25-years-old, he’s been teaching a grand total of one year. … Right away something is different about him.”

Most of the students’ fathers were Great Depression-era parents and were stern, Guerinot added.

“They were providers, they were stoic, they were good men, hardworking and loved us,” he said. However, he noted, “they weren’t always a lot of fun.”

Although Guerinot recalls Kinsella as being challenging at times — such as when Kinsella gave him a D in math — Kinsella had an authentic affection for the kids, which Guerinot said could be felt through his enjoyment of the classes Kinsella taught.

“There’s something about that, that I look back on it as my most favorable educational experience through high school and college,” Guerinot said.

Although Kinsella no longer lives in the state or teaches, he said he was humbled by the gesture and made the drive from Baltimore to attend the dedication.

“I taught (at Our Lady of Lourdes) for about 10 years, and then went on to a different career. … The fact that Jim stayed close to his friends from that time and that they sought to reconnect with me as adults is a testament to the great environment at our school,” Kinsella said in a Sept. 7 press release from Seton announcing the donation.