Alvin and the Chipmunks: The Road Chip - Catholic Courier 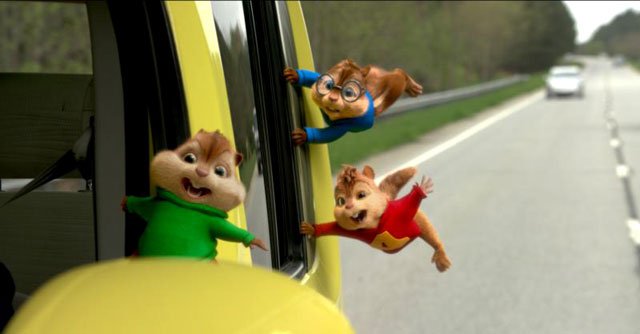 Animated characters Theodore, Alvin and Simon appear in the movie "Alvin and the Chipmunks: The Road Chip." The Catholic News Service classification is A-I -- general patronage. The Motion Picture Association of America rating is PG -- parental guidance suggested. Some material may not be suitable for children.
By John Mulderig and Maria Macina
Catholic News Service
NEW YORK (CNS) — There’s a bit of scatological humor, along with singing aplenty, in the kid-oriented comedy "Alvin and the Chipmunks: The Road Chip" (Fox).
Yet, overall, this blend of animation and live action adds up to a moderately charming adventure that carries a mostly positive — though not unblemished — message about family and love in general.
Originally bred in the imagination of Ross Bagdasarian to serve as the fictional artists on a 1958 novelty record, the famous trio of rodent brothers — mischievous Alvin (voice of Justin Long), brainy Simon (voice of Matthew Gray Gubler) and gentle Theodore (voice by Jesse McCartney) — have been repackaged for a variety of media projects across the intervening decades.
Long after Bagdasarian’s 1972 death — his son, Ross Jr., currently guides the franchise — the critters made the leap from television to the big screen, with a stop along the way for a duo of films intended for video release only. In 2007, they were ready for their eponymous close-up, the multiplex debut which stands as this movie’s great granddaddy.
Their current escapade might be subtitled "The Courtship of Alvin’s Father" since it finds the furry lads desperate to stop their human "Dad," Dave Seville (Jason Lee), from proposing to his surgeon girlfriend, Samantha (Kimberly Williams-Paisley). It’s not Sam herself the boys mind — she’s nice enough to make them a good stepmom — but her bully of a teen son, Miles (Josh Green).
When Los Angeles-based talent manager Dave departs for a business trip to Miami with Samantha in tow, the trouble making triad — who earlier stumbled across an engagement ring in a shopping bag Dave had brought home — fears the worst. So, too, does Miles, who is just as anxious as Alvin and his brothers to keep the two families unmixed.
Since Miles has been given charge of the four-pawed warblers while Dave and Samantha are away, everything is in place for a journey to Florida to put the kibosh on any question-popping. Along the way, however, the quartet encounters — or creates — numerous obstacles to their plan, the most prominent arising when they run afoul of nerdy air marshal Scruggs (Tony Hale).
Scruggs proves a comically inept but remarkably dogged pursuer.
One of the background themes of this visually appealing, energetic outing concerns the jealousy the Chipmunks are shown to be nursing toward their female counterparts, the Chipettes (voiced by Kaley Cuoco, Anna Faris and Christina Applegate), who have temporarily overtaken them in popularity.
Of course, such unworthy feelings don’t prevent the two groups from combining for a climactic musical number.
Parents will appreciate the turn in Randi Mayem Singer and Adam Sztykiel’s script by which we learn that Miles’ negative, resentful behavior grows out of the insecurity he feels over having been abandoned by his father. This can serve as the basis for a valuable discussion with youngsters about the vulnerability that often lies behind aggression.
Grownups may have more mixed feelings about the nature of the central clan itself. At one level, the absurd but nurturing bond between Dave and his proteges can be taken in the same spirit as that which united E.B. White’s anthropomorphized mouse, Stuart Little, with his human parents.
Yet this unorthodox household also becomes the vehicle for advancing, yet again, the Hollywood thesis that families are a chosen, rather than a given, reality. And larger social attitudes are reflected in a scene in which an airport clerk, quizzed by Scruggs as to whether he’s recently rented a car to a group of chipmunks, replies that families come in all shapes and sizes, and "we don’t judge."
Balancing all this is the underlying sense, throughout director Walt Becker’s lighthearted, undemanding picture, that Dave and Samantha’s marriage would be a positive development for all the principal characters.
Despite its simplistic and recycled plot, "Road Chip" will likely satisfy its diminutive target audience. As for their accompanying elders, they can pass the time pondering what must be one of the most incongruous cameo appearances in cinematic history, that put in by loudly clad underground-cinema auteur John Waters.
The film contains some mild potty humor and a single slightly crass term. The Catholic News Service classification is A-I — general patronage. The Motion Picture Association of America rating is PG — parental guidance suggested. Some material may not be suitable for children.
– – –
Mulderig is on the staff, and Macina is a guest reviewer, for Catholic News Service.
Copyright © 2022 Catholic News Service, Inc. All rights reserved. Linking is encouraged, but republishing or redistributing, including by framing or similar means, without the publisher's prior written permission is prohibited.