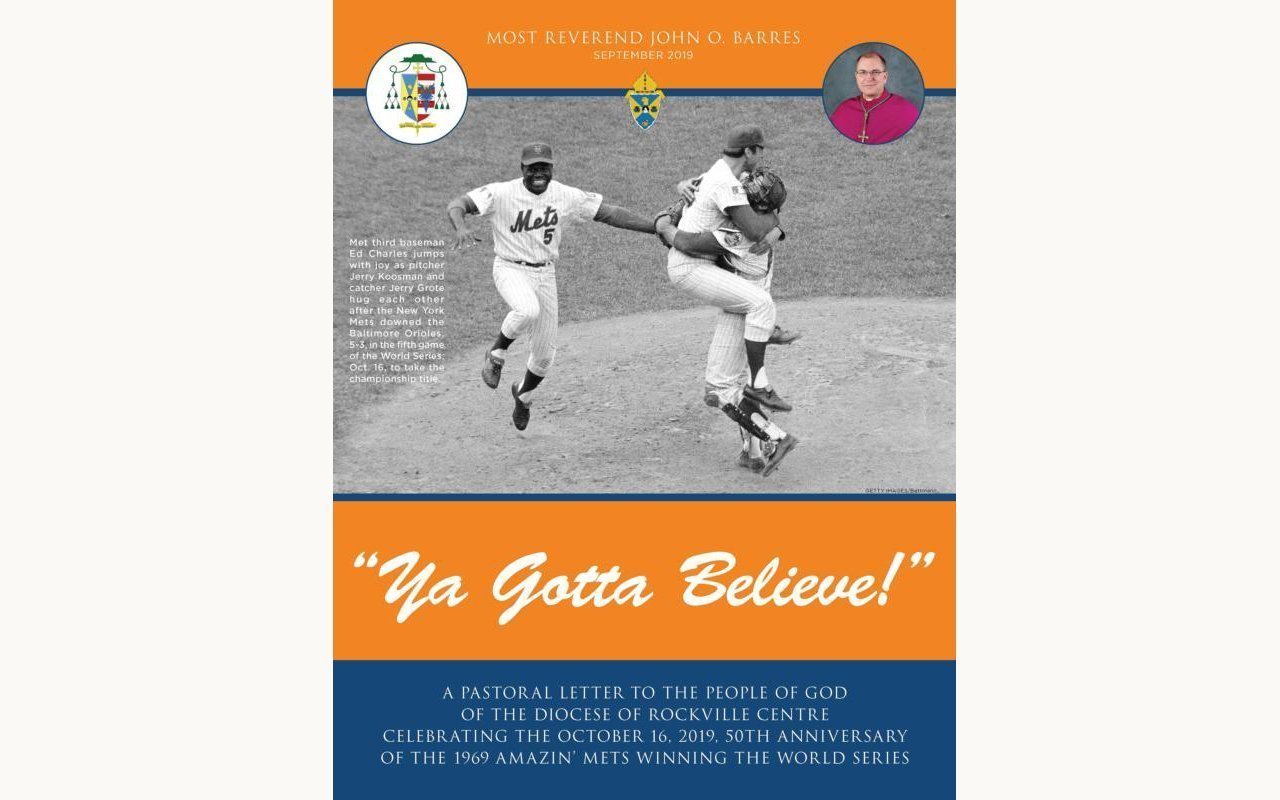 Drawing on the example of the once hapless Mets who faced long odds and deep skepticism to rise to the top of the baseball world, Bishop Barres said the Catholic Church on Long Island “can experience a new era of Catholic evangelization and dramatic missionary growth against all the odds and expectations and even become a model for the country.”

The pastoral letter — titled “Ya Gotta Believe!” — offers words of hope and inspiration to encourage Catholics to evangelize in their daily life.

“In short, Ya gotta truly believe and deeply believe in what we believe as Catholics,” he wrote. “While we acknowledge realistically the challenges of a culture that is becoming increasingly unfriendly to religious views as well as all the challenges of the times, we also acknowledge that to give up on dramatic missionary growth is to forget the power of God at work in our hearts and in the world around us.”

The young players and others who heard Grote’s optimism at first were astonished to hear such words, but as the baseball season wore on, they began to believe in the seemingly impossible, Bishop Barres said. The club won 100 games and defeated a high-powered Baltimore Orioles team in five games to claim the World Series title.

The eight-page pastoral letter, illustrated with photos from the Mets’ season, comes just before the 50th anniversary of the clinching game Oct. 16, 1969.

Bishop Barres wrote that during a ceremony at Citi Field marking the anniversary in June, a young father of four said that the Mets’ accomplishment was inspiring to young people and could serve to “connect with our young people and with Catholics who have been away from the church for a while and yet who could feel re-energized by a fresh approach to evangelization.”

Bishop Barres called on lay Catholics, religious, clergy and bishops to “rediscover and rebelieve that dramatic missionary growth on Long Island is not only possible, but occurring right in front of us.”

He cited examples of Catholics involved in various ministries, people entering the church through the Rite of Christian Initiation of Adults, the activities of young people growing in their faith and advocating for justice, and new Catholic apologetics programs in schools as signs of a growing faith in the diocese.

Acknowledging that the “pain of the clergy sexual abuse crisis is very real,” Bishop Barres wrote that during all times of church history dramatic missionary growth “passes through the cross of Christ.”

The pastoral letter called for prayers for people in need and who are hurting and for inactive Catholics to return to the church.

“We pray that we could be missionaries, evangelizers and instruments of the Divine Mercy to atheists, agnostics, non-Catholics and to those who have painfully proclaimed that they have ‘left’ the Catholic Church. We pray too that we could be stronger in our ecumenical and interfaith witness and outreach,” the document said.

Bishop Barres said he believes “that the spirit of the 1969 Miracle Mets … can help inspire Catholics on Long Island to believe in the dramatic missionary growth and the evangelizing mission of the Catholic Church on Long Island,” Bishop Barres wrote.

“No one predicted that the New York Mets would win the World Series in 1969,” he continued. “No one is predicting that the Catholic Church could experience a new era of profound and deep evangelization on Long Island and beyond.

“But it is possible with the power of the Holy Spirit guiding us an each one of us responding to our baptismal call to courageous holiness and mission. We gotta believe!”

Editor’s Note: Bishop Barres’ pastoral letter was published in English and Spanish and is available online at the diocesan website, https://amazinmetsanddramaticmissionarygrowth.com.