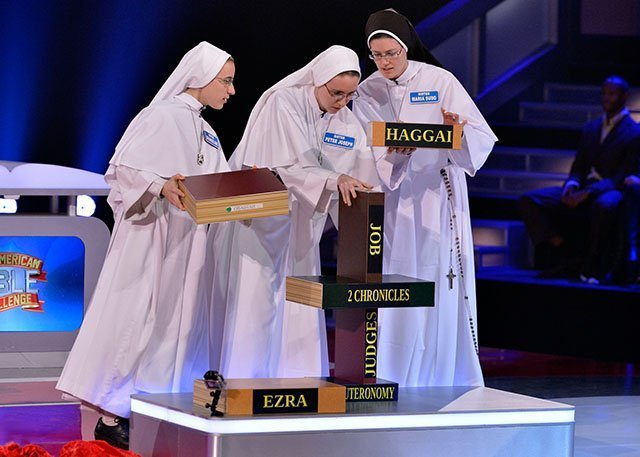 Sisters Evangeline, Peter Joseph and Maria Suso participate in the second season of "The American Bible Challenge." The three Dominican Sisters of Mary, Mother of the Eucharist from Ann Arbor, Mich., made it into the final round of the Bible trivia program on cable TV's Game Show Network. The third season of the series will premiere May 22.

WASHINGTON (CNS) — America still loves a good TV game show, as "The American Bible Challenge" has demonstrated. It’s the highest-rated program on cable’s Game Show Network, which specializes in this kind of thing.

The third season of "The American Bible Challenge" premieres May 22 on GSN. The first season featured a team of nuns coming close to winning the season championship. This season, the show will feature a three-man team of motorcycle-riding priests, appropriately named the Sons of Thunder.

Under the show’s format, each three-member team has to play against two other teams to test their Bible knowledge. Each week’s winner — there are nine weeks of games in all — goes to a three-episode semifinal round, with the three winners who emerge from that heat vying for the championship. The winnings increase in each round, and the cash goes to the team’s favorite charity — oftentimes a ministry in which they are involved.

Host Jeff Foxworthy, who was raised a Southern Baptist but who now attends a nondenominational church in the Atlanta area, said he initially shied away from the prospect of hosting the show.

"I had to say, ‘Let me go and think about this,’" he told reporters on an April 17 conference call to promote the show, wondering whether it was actually possible to "go and do a game show about the Bible" without incurring God’s wrath. "I didn’t want to be looking up from hell," Foxworthy said, his voice deepening to imply the Almighty’s: "A game show? About the Bible?"

"I thought it would be weird to reward people for what they knew," Foxworthy added. "The only people Jesus got sideways with was the people who knew the Bible. They had head knowledge, but not heart knowledge." What cinched the deal for him, he said, was the "charity aspect" of the show. "That’s what makes it unique. When we show what these people are doing in their community, that’s what makes it interesting, when you can see it in action."

More visits to those ministries will be part of the third season, he said.

He cited what to him is a memorable example of this. "There was a group of three women from Plano, Texas. They did a food pantry literally out of the back door of their home. They opened their door and they were feeding the community," Foxworthy said. "If you go through all the brackets you win something like $140,000. … Well, one of the women was sitting there crying, there were tears rolling down her face."

Foxworthy said he asked her if something was wrong. She replied, "Do you know what $25,000 can provide? That’s 80,000 meals." "It’s not like people were getting their kitchen remodeled or buying a new car," he added.

A new element will be a segment called "Christ or Klingon?" During the segment, a word is spoken to contestants, who have to determine whether the word comes from the one of books of the Bible or from one of the versions of "Star Trek." Award-winning gospel singer Kirk Franklin was brought in at the start of the second season to be Foxworthy’s musical co-host.

Asked how he thought "The American Bible Challenge" is relevant in contemporary society, Foxworthy answered, "It’s the inspired word of God. I think it’s always relevant. We get so egotistical sometimes: ‘I’m on the path right now and I’m down the road.’"

Once he agreed to host the show, he said, "I knew I’d get some grief. Not from the secular community but from someone in the religious community" with a set notion about how — or whether — such a show could be done. Much to his gratification, Foxworthy added, no such negative feedback made its way to him.

One point of contention, he said, is that the show is "not on a faith-based network. But it’s the best-rated show in the history of the network. Who saw that comin’?"

Comparing his work on "The American Bible Challenge" to his first game-show job, "Are You Smarter Than a Fifth Grader," "it flowed so easily" on his new show, thanks in part to having the same executive producer as "Fifth Grader," Foxworthy said. "On ‘Fifth Grader,’ we were doing 170 shows in, like, five-and-a-half weeks!"