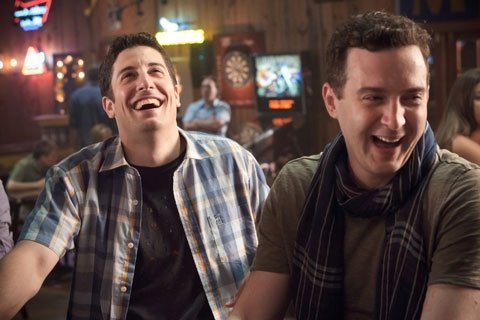 NEW YORK (CNS) — It’s interesting to speculate whether Steve Stifler — the character Seann William Scott has played throughout the much-too-long life of the "American Pie" franchise — constitutes the single most degraded specimen of humanity ever to occupy a movie screen. If so, at least the gutter-crawling comedy series has achieved one superlative.

The latest dip in the slime comes titled "American Reunion" (Universal) and finds Stifler, Jim Levenstein (Jason Biggs) and the other members of their apparently perennial band of boors gathering for their high school reunion and continuing to obsess about sex.

Jim and his wife Michelle (Alyson Hannigan), it seems, have lost that loving feeling and so (as early scenes make excessively apparent) have begun resorting to self-stimulation. Their efforts to rekindle the flame — aided, eventually, by the awkward marital advice Jim manages to extract from his kindly, now-widowed father (Eugene Levy) — represent such drama as can be discerned amid the lowlife high jinks.

The latter, of course, are the real business at hand, and they range from Jim’s potentially adulterous misadventures with an 18-year-old he used to baby-sit to Stifler’s ever-so-witty use of an obnoxious adversary’s beer cooler as a toilet.

Wasn’t it Noel Coward who first came up with that one?

And on it goes. Like the base characters that inhabit it, co-writers and directors Jon Hurwitz and Hayden Schlossberg’s endlessly crass flick gets old fast, but never matures.