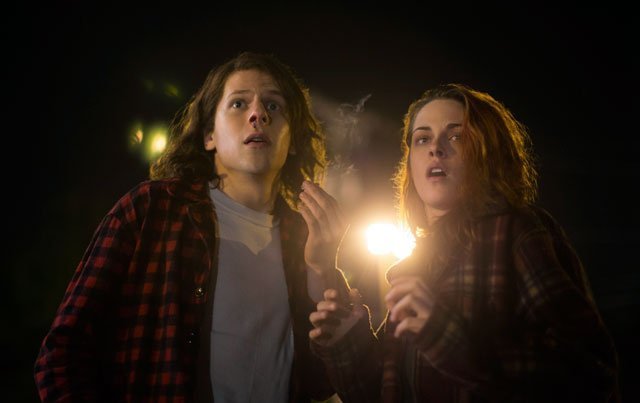 Jesse Eisenberg and Kristen Stewart star in a scene from the movie "American Ultra." The Catholic News Service classification is O -- morally offensive. The Motion Picture Association of America rating is R -- restricted. Under 17 requires accompanying parent or adult guardian.
By John Mulderig
Catholic News Service
NEW YORK (CNS) — The premise on which the action comedy "American Ultra" (Lionsgate) rests is a relatively clever one. Yet the film’s potential appeal is overwhelmed by the excessive violence with which this initial scenario is developed.
Director Nima Nourizadeh’s fish-out-of-water story begins by showing us the humdrum life of small-town West Virginia slacker Mike Howell (Jesse Eisenberg). Though he aspires to become a comic book artist — an ambition in which he’s supported by his stabilizing live-in girlfriend, Phoebe (Kristen Stewart) — Mike currently toils as a convenience store clerk.
Along with sketching in his notebook, Mike devotes a considerable portion of his free time to smoking the pot supplied to him by twitchy local misfit Rose (John Leguizamo). Mike’s leisurely lifestyle is suddenly interrupted, however, when a mysterious stranger (Connie Britton) appears at his workplace and starts spouting what sounds to him like gibberish but is, in reality, a coded warning.
As the audience knows, but Mike has yet to discover, this visitor is a CIA agent named Victoria Lasseter. She’s out to trigger Mike’s suppressed memories of participating, under her direction, in an agency research program designed to turn ordinary citizens who had run afoul of the law in a minor way into highly skilled warriors.
In the aftermath of the project, which failed and was shuttered, Mike’s recollections of the experience were erased. Yet he subconsciously retains the cutting-edge combat abilities he gained from the experiment.
That’s just as well because Victoria’s ruthless bureaucratic rival Adrian Yates (Topher Grace) — the creator of a similar but far more sinister program designed to turn the criminally insane into government fighters — is out to show the superiority of his trainees by siccing them on Mike.
Though it amounts to the single joke on which screenwriter Max Landis wagers his script’s whole fortune, the combination of low-key wonderment and ninja-like dexterity with which Mike reacts to his peculiar circumstances — ably conveyed by Eisenberg — is good for a few laughs. At a deeper level, meanwhile, Mike’s single-hearted devotion to Phoebe, made manifest by his determination to propose to her, does add some positive morality to his situation.
But the gory results of Mike’s campaign of self-defense, during which he deploys everything from the edge of a spoon to an iron-headed club hammer, are far too explicitly portrayed.
They sabotage the light tone as well as the movie’s more serious moments — such as Mike’s briefly sympathetic encounter with one of his pursuers (Walton Goggins). They also turn what might have been an amusingly dizzy outing into a queasy rampage.
The film contains frequent graphic bloodletting, cohabitation, drug use, at least one instance of profanity and pervasive rough and crude language. The Catholic News Service classification is O — morally offensive. The Motion Picture Association of America rating is R — restricted. Under 17 requires accompanying parent or adult guardian.
– – –
Mulderig is on the staff of Catholic News Service.
Copyright © 2023 Catholic News Service, Inc. All rights reserved. Linking is encouraged, but republishing or redistributing, including by framing or similar means, without the publisher's prior written permission is prohibited.