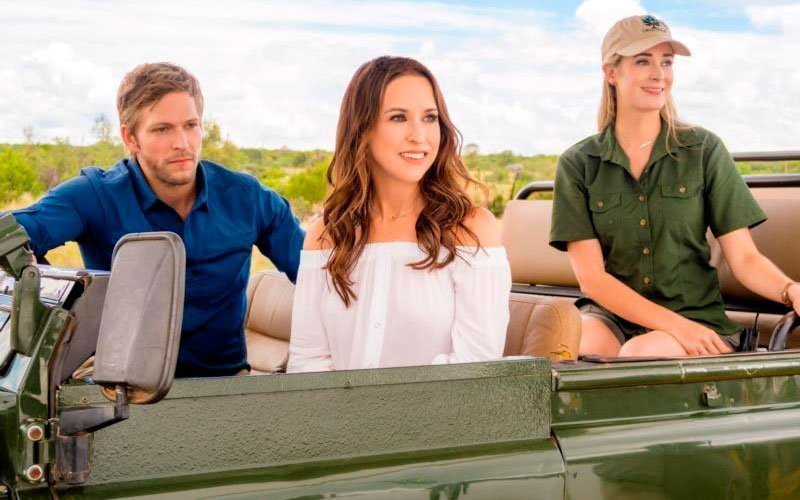 In her 12th Hallmark production, executive producer Lacey Chabert (“Party of Five”), plays 30-something Chicago Web designer Kira Slater. Preparing for a routine, quiet vacation in Scottsdale, Arizona, as the movie opens, Kira changes her plans when she discovers her recently deceased great uncle, Irving, has left her some sort of inheritance.

To the consternation of her accountant boyfriend, Brad Wilson (Jonathan Roxmouth), Kira departs for South Africa and the Slater Ukuthula Reserve, which Irving owned, for the reading of the will. Intrigued but with modest expectations, Kira is startled to learn she’s inherited the reserve, which she remembers fondly from childhood visits.

Two factors militate against Kira taking over the place. She’s not financially equipped to invest in the operation, which may be forced to close without a substantial influx of capital. Additionally, Kira is reluctant to leave behind the life she’s made. At this juncture in her journey, she values stability over adventure — as she tells Ukuthula ranger Tom Anderson (Jon Cor).

Determined to save the reserve, Tom becomes Kira’s guide. He reintroduces her to Ukuthula’s elephants, giraffes and lions, all in their most majestic and benign states. He succeeds in reminding Kira of the reserve’s “wow” factor, and reignites her love for this special place.

Tom also helps Kira comprehend Ukuthula’s vital connection to the nearby Zulu village. He and the heiress visit the school her uncle established, where she hears the children’s “beautiful singing,” which particularly moves her. She also understands that most of the reserve’s employees are Zulu.

Her love of the land, animals and people motivates the reserve’s new owner to save Ukuthula. But she acknowledges that this may require her to make a deal with unscrupulous Johannesburg resorts owner Artie Harrington Jr. (Francis Chouler), who has the funds she lacks. Understandably, Kira doesn’t trust Harrington’s assurances that he will preserve the integrity of her vision.

As Kira attempts to resolve her quandary about how best to save Ukuthula, Brad arrives for a visit, offering to help. But his duplicitousness eventually compels Kira to create an original and realistic solution, one which will gratify viewers.

With a script free of violence, vulgar language or the remotest suggestions of sensuality, it’s a pleasure to report nothing objectionable occurs in “Love on Safari.” The movie is a true rarity in our current culture: a TV show all ages can enjoy.

Chabert’s nuanced and thoughtful performance lends authenticity and credibility to her portrayal of Kira as she works through internal conflicts to do what’s best for her and those on whom her important decision will have an impact. The outstanding chemistry between Chabert and Cor also adds to the movie’s appeal.

The inclusion of Lwazi (Abigail Kubeke), a kind of spiritual earth mother, particularly enriches the cast — and the narrative’s texture. Essentially in charge of the reserve since Irving’s death, Lwazi profoundly influences and affirms Kira.

Lwazi is prone to speak in aphorisms. Yet when Kubeke delivers her words, they register as natural and spontaneous.

“Love on Safari” also conveys important messages — about the urgent need to protect endangered species; about the importance of young women finding suitable spouses, men who respect them as equal partners; and, finally, about “restoring power and hope” to indigenous people.

Sentimental, yet never maudlin, “Love on Safari” represents the best in Hallmark’s tradition of storytelling and will leave its audience feeling better about our common humanity.