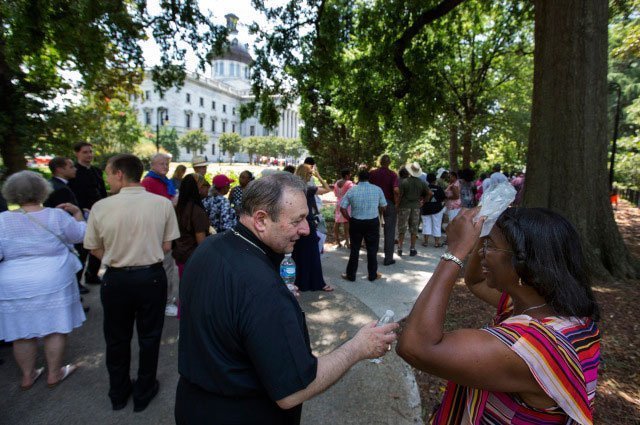 Bishop Robert E. Guglielmone of Charleston, S.C., talks to Barbara Thompson of Manning, S.C., while she waits in the heat outside the South Carolina Statehouse in Columbia June 24. Inside the Capitol the body of the Rev. Clementa C. Pinckney, a pastor and state senator, lay in state. The pastor of Emanuel African Methodist Episcopal Church in Charleston was one of nine people shot and killed at the church June 17.

WASHINGTON (CNS) — Lisa Sharon Harper, director of organizing for the Sojourners community in Washington, defined "America’s original sin" as "racial hierarchy" at a June 15 conference on solidarity and faith issues in the nation’s capital.

Two days later, that sin reappeared in a shocking and conscience-troubling way, as nine members of a Bible study group at an African-American church in Charleston, South Carolina, were murdered, allegedly by a 21-year-old white man, Dylann Roof, who had penned a race-baiting and race-hating manifesto not long before the shooting. In the manifesto, Roof said that, through the action he was contemplating taking, he hoped to start a race war in the country.

Archbishop Joseph E. Kurtz of Louisville, Kentucky, president of the U.S. bishops’ conference, expressed "grief and deep sadness" over the murders in a June 19 statement. "There have been far too many heartbreaking losses in the African-American community this year alone. Our prayers are with all those suffering from this heinous crime. We join our voices with civic and religious leaders in pledging to work for healing and reconciliation," he said.

The archbishop was not a Johnny-come-lately on race issues. Just the week prior, on June 10, he told his fellow bishops, "We mourn those tragic events in which African-Americans and others have lost their lives in altercations with law enforcement officials. These deaths have led to peaceful demonstrations, as well as violent conflicts in the streets of our cities. In every instance, our prayer for every community is that of our Lord in St. John’s Gospel, ‘That they all may be one.’"

Archbishop Kurtz uttered those words as the bishops had gathered in St. Louis, not far from Ferguson, Missouri, where the shooting death last August of unarmed African-American teenager Michael Brown brought forth not only a wave of protests by African-Americans, but cast a critical eye on the use of deadly force by police on African-Americans in subsequent incidents throughout the country.

Bishop Joseph E. Guglielmone of Charleston, noting Archbishop Kurtz’s call to "commit to an ending of racism and the promotion of peace, justice and respect for all persons," himself urged "everyone in the Catholic community in South Carolina to make this a personal commitment as well."

"We forgive the perpetrator," said a June 23 statement from Pax Christi USA.

"Yet the killer is still among us," it added.

"Overt and covert racism is the killer, planted in the earth of these United States long ago with the arrival of the first African slaves. These men and women were brought unwillingly and in chains to the colony of Jamestown, Virginia, in 1619. Why? We all know this story, don’t we? Yet, in 2015, most white Americans, as in 1619, continue to marginalize, devalue, and dehumanize African-Americans in particular. There are messages white America needs to hear from people of color. Engage in the dialogue."

Pax Christi is practicing what it preaches. It has conducted a series of dialogues over the past year in five major U.S. cities, and will add a sixth in September in the Washington-Baltimore area.

A similar lack of recognition of minorities cropped up even within U.S. Catholic peace activist circles, according to Sister Patricia Chappell, a Sister of Notre Dame de Namur who is Pax Christi USA’s president, and herself an African-American.

"The reality is that, traditionally, Pax Christi USA has not really done any major outreach to Catholic communities of color," she told Catholic News Service, adding that a second series of workshops will be conducted in the original cities, and a manual produced, as a way of forging a common future within the peace movement.

Alveda King Tookes, a niece of the Rev. Martin Luther King who often drops her married name when doing her pro-life work for Priests for Life, said she was stunned when Fox News Channel called her at 4 a.m. the morning after the shootings to gain comment from her.

"My first reaction: Oh no, not again. My grandmother, Alfreda Williams King, was shot at Ebenezer (Baptist Church in Atlanta, where Rev. King had been pastor). Of course, that (assailant) was an African-American; of course, this time it was a Caucasian," she told CNS from Atlanta.

After the outpouring of grief for the victims of the Charleston shootings comes the harder work of public policy changes.

The initial reaction, lauded by many but scorned by others, was the effort by South Carolina Gov. Nikki Haley to take down the Confederate battle flag from the South Carolina Capitol building. But removing it permanently will require action by the state Legislature. The Rev. Clementia Pinckney, one of the nine murdered, was a South Carolina state senator. Many major national retailers have said they will discontinue sales of Confederate-emblem merchandise, while others are stocking up. And other Southern states’ flags have Confederate elements to them.

The mass murders also brought about an effort to revive a bipartisan gun control bill by Sens. Joe Manchin, D-West Virginia, and Pat Toomey, R-Pennsylvania, initially offered in response to the Sandy Hook Elementary School murders in December 2012. Fierce lobbying by the National Rifle Association and the now-typical Senate polarization scuttled the bill two years ago.

While racial justice advocates have lauded these moves, they have also acknowledged that they only treat a symptom of the underlying sickness of racism. And that is a symptom that has eluded a cure in this country for nearly four centuries. As Tookes put it, "Gun control is not going to work. It’s going to take heart control."