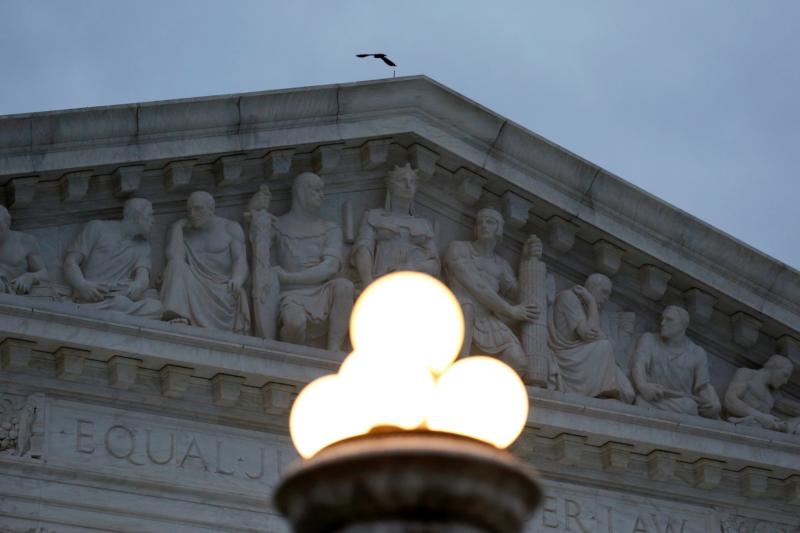 The U.S. Supreme Court in Washington stands in waiting for justices to return for a new term Sept. 27. (CNS photo by Joshua Roberts/Reuters)

WASHINGTON (CNS) — After the weeks of intense drama focused on Supreme Court nominee Judge Brett Kavanaugh, the nation’s highest court was ready to get back to business, full bench or not.

The expression “the show must go on” certainly applies because the Supreme Court always starts on the first Monday in October, which this year is Oct. 1.

Over the summer and into September no one was talking about the court’s upcoming cases. Instead, all attention has been on who would fill the seat of Justice Anthony Kennedy, who announced his retirement at the end of June and officially retired July 31.

When President Donald Trump announced July 9 that Kavanaugh, a federal judge, was his nominee, the divided nation responded accordingly. Many praised the judge’s qualifications and were pleased that the president had fulfilled his campaign promise to nominate a pro-life judge to the Supreme Court, but the choice angered many Americans displeased that Kavanaugh’s vote could potentially reverse the court’s 1973 Roe v. Wade decision legalizing abortion.

Crowds on both sides assembled on the steps of the Supreme Court the night Kavanaugh’s nomination was announced and they continued to protest during Senate confirmation hearings and the most recent Sept. 27 hearing concerning Christine Blasey Ford’s allegation of sexual assault against him for an incident she said occurred when she was 15 and he was 17.

After that daylong hearing, the Senate Judiciary Committee voted 11-10 Sept. 28 to advance Kavanaugh’s nomination to the Senate floor. Republicans then approved a proposal by Sen. Jeff Flake, R-Arizona, that the FBI be given one week to investigate Ford’s allegation, which the Republicans agreed to do.

But with or without closure on Kavanaugh, the court is set to resume what it does: listening to oral arguments and making decisions. An annual Red Mass will be celebrated at the Cathedral of St. Matthew Sept. 30 offering prayers for this new term. Washington Cardinal Donald W. Wuerl, who often celebrates this Mass and has been seen afterward talking with Supreme Court justices in attendance, will not be there this year. Washington Auxiliary Bishop Mario E. Dorsonville will be the main celebrant.

As the court gets back into action, it will not be facing the drama of high-profile cases on hot button issues. Instead, it will have more basic cases: critical habitats under the Endangered Species Act, if states are bound by the Eighth Amendment’s ban on excessive fines and how property owners can challenge government land acquisitions. It also will examine cases about employment discrimination and class arbitration and deal with a fair amount of criminal law.

The court usually hears about 70 cases of the nearly 7,000 that petition for review each year. To date, it has already agreed to hear 38 cases and will announce more in upcoming weeks.

So far, there is not much on the docket where Catholic leaders are likely to weigh in, but there are a few cases that the court might take up that would be of interest.

As in previous terms, the court is once again taking on death penalty cases, which may have an increased interest after Pope Francis made his announcement in April that he approved changes to the Catechism of the Catholic Church saying the death penalty is no longer admissible under any circumstances.

The first death penalty case, Madison v. Alabama, comes up on the second day of the court’s term. Here the court will consider whether the Eighth Amendment permits the execution of a prisoner whose mental disability prevents him from remembering his offense.

The other death penalty case, to be argued Nov. 6, examines the rules for challenging a “method of execution.” The plaintiff in this case suffers from an unusual medical condition and claims Missouri’s lethal injection protocol would be more gruesome and cause more suffering than if he were put to death by lethal gas, which the state lacks a protocol to use.

One case of interest that the court has not decided yet if it will take regarding the establishment of religion involves a 40-foot-tall cross memorializing soldiers who died in World War I that sits at a busy intersection in the Washington suburb of Bladensburg, Maryland.

Last year, the 4th U.S. Circuit Court of Appeals based in Richmond, Virginia, ruled 2-1 that the 93-year-old monument is unconstitutional and must be removed or destroyed. “(It) has the primary effect of endorsing religion and excessively entangles the government in religion.”

Known as the Bladensburg Cross or the Peace Cross, the cement and marble memorial was erected by the Snyder-Farmer Post of the American Legion of Hyattsville, Maryland, to recall the 49 men of Prince George’s County who died in World War I. The cross, whose construction was funded by local families, was dedicated July 13, 1925.

The American Humanist Association, a Washington-based group that represents atheists and others, filed suit against the memorial because it is in the shape of a cross. It argued that having a religious symbol on government property violates the establishment clause of the First Amendment.

Another case the court could take up that will be of interest involves two state petitions from Louisiana and Kansas asking the court to uphold the termination of Planned Parenthood’s participation in the state Medicaid program.

During an American Bar Association preview of the court’s upcoming term Sept. 25 at American University, the panelists acknowledged that one big slice of the picture, the new justice, was still unclear.

Beth Brinkmann, an attorney and partner at Covington & Burling, who has argued 24 cases before the court, said: “It’s probably good they don’t have a lot of blockbusters and I think they would prefer it that way to get back to a natural state of affairs.”