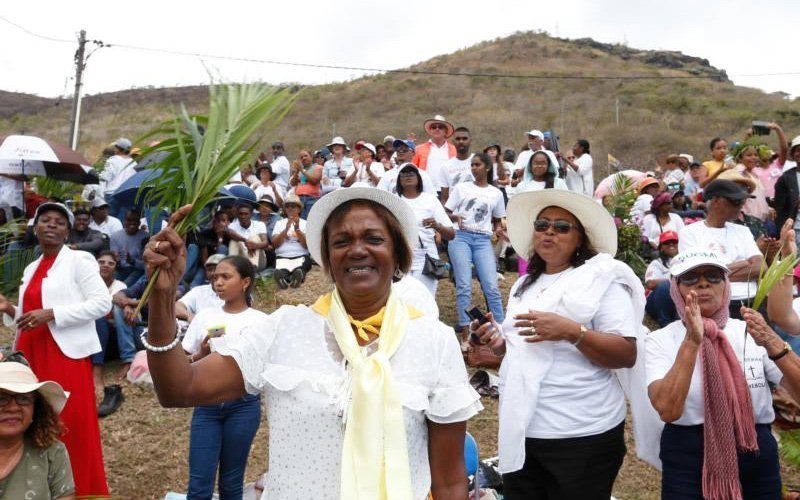 A woman waves palm fronds as people wait for the arrival of Pope Francis to celebrate Mass at the monument to Mary, Queen of Peace in Port Louis, Mauritius, Sept. 9, 2019. (CNS photo by Paul Haring)

PORT LOUIS, Mauritius (CNS) — Statistical indicators show Mauritius’ rapid economic growth has benefited all sectors of society, lifting thousands out of poverty over the past 30 years, but Pope Francis still urged the island’s Catholics to be careful.

The danger is that “we can yield to the temptation to lose our enthusiasm for evangelization by taking refuge in worldly securities that slowly but surely not only affect the mission, but actually hamper it and prevent it from drawing people together,” he said at Mass Sept. 9 on a terraced hillside overlooking Port Louis.

Officials said 100,000 people gathered on the hillside for the Mass. Some held umbrellas, while most were wearing straw hats to protect themselves from the sun. The young, though, wore baseball caps.

One of them was Gael Henriette-Bolli, 29, a lecturer in law at a local university. He said it’s true that material well-being and the explosion of technology can distract the young from their faith. But he and his friends in “Pastoral Zenn,” the Port Louis diocesan youth ministry program, are reaching out, especially through Facebook and other social media.

“Some of us young people have attended World Youth Days, and we stay strong,” he said. “And if the value of faith has been inculcated by their family, the youth are still interested.”

Ambal Arokeum, a mother and grandmother from Rose Hill, said the economy growth “has been the benediction of God.”

During his eight hours in Mauritius — making his visit a day trip from Madagascar — Pope Francis urged the local church and government to make greater efforts to listen to and involve the island’s young people in every aspect of life.

“This is not always easy. It means learning to acknowledge the presence of the young and to make room for them,” he said. The young people in the crowd cheered their approval.

Mauritius has become a super-success story for development in Africa following efforts to diversify the economy. Rather than relying mostly on sugar cane and textiles, now the country is known for tourism, call centers and “financial services,” which make the country a tax haven for many.

Pope Francis noted, though, how unemployment still is a problem particularly for young adults, which “not only creates uncertainty about the future, but also prevents them from believing that they play a significant part in your shared future.”

Cardinal Maurice Piat of Port Louis has written about the island’s “vocations crisis,” which Pope Francis tied to the question of economic prosperity and attention to the young.

“When we hear the threatening prognosis that ‘our numbers are decreasing,’ we should be concerned not so much with the decline of this or that mode of consecration in the church, but with the lack of men and women who wish to experience happiness on the paths of holiness,” the pope said. Young people need to see and be encouraged by priests and religious who give witness to the joy of a life dedicated totally to serving God and one’s brothers and sisters.

During the second reading at Pope Francis’ Mass, the crowd could hear a muezzin calling Muslims to midday prayer in the neighborhood below.

In the pope’s afternoon speech to government officials, civic leaders and members of the diplomatic corps, he noted the diversity and praised the beauty that comes from “the ability to acknowledge, respect and harmonize existing differences in view of a common project.”

The diversity of which the nation boasts was the result of both forced and voluntary migration; when the Portuguese discovered the island in 1505, it was uninhabited. However, there were dodo birds, which became extinct by the mid-17th century during the rule of the Dutch.

Pope Francis pleaded with Mauritians to recognize their migrant roots and to do more to be welcoming to those who come to their shores seeking safety and a better life.

The pope also had strong words against corruption, something which has plagued the nation for decades and appears relentless.

Politicians and civil servants must be models of virtue, he said. “By your conduct and your determination to combat all forms of corruption, may you demonstrate the grandeur of your commitment in service to the common good, and always be worthy of the trust placed in you by your fellow citizens.”

And he returned to the theme of economic development that benefits all citizens and that ensures young people have a chance at a future.

“I would like to encourage you to promote an economic policy focused on people and in a position to favor a better division of income, the creation of jobs and the integral promotion of the poor,” the pope told the government and civic leaders.

Pope Francis warned of the temptation to follow “an idolatrous economic model that feels the need to sacrifice human lives on the altar of speculation and profit alone, considering only immediate advantage to the detriment of protecting the poor, the environment and its resources.”