Amid pandemic, invoke Mary to intercede for our healing - Catholic Courier 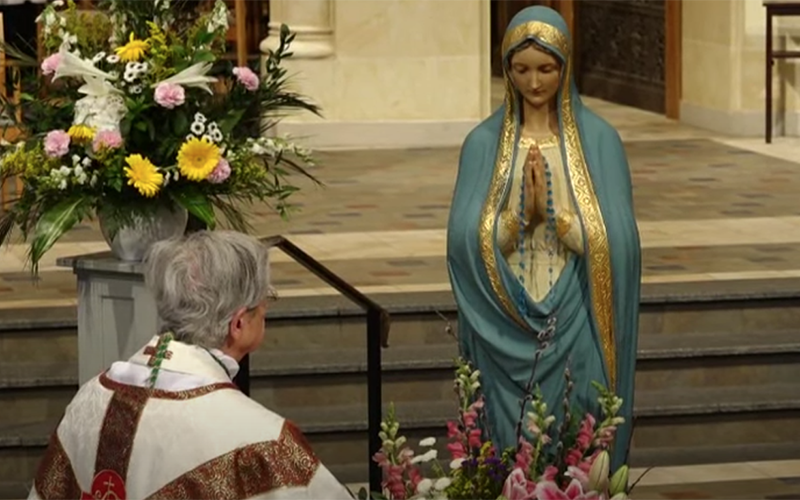 My dear sisters
and brothers in Christ:

May is traditionally the month in which we honor Our Mother Mary. Ordinarily we would be gathering for May processions and May crownings of the Blessed Virgin Mary. But we know well that this is a most unusual and extremely difficult time that does not allow for such gatherings. Yet I pray that during this month we will pray Mary’s rosary, whether privately or as a family. A family can have its own May crowning using a statue or picture of Our Mother that is in the home. Also, the recitation of the rosary and other Marian devotions are available via social media as indicated on our diocesan website.

During this month as we turn to Mary, Help of Christians, we come to appreciate that Mary truly understands hardship, which certainly was a part of her life. On September 15, the day after the Feast of the Exaltation of the Holy Cross, the church celebrates the memorial of Our Lady of Sorrows, honoring the mother of the Crucified Christ. There are seven sorrows of Mary that the church calls to mind in venerating the Virgin Mother who stood beneath the Cross of Christ, and which assure us of her closeness and compassion in our present struggles.

The first sorrow is The Prophecy of Simeon, which occurred when Mary and Joseph — in accordance with the Law of Moses — brought Jesus to Jerusalem to be presented to the Lord. Simeon “blessed them and said to Mary his mother: ‘This child is destined to be the downfall and the rise of many in Israel, a sign that will be opposed — and you yourself shall be pierced with a sword — so that the thoughts of many hearts may be laid bare’” (see Luke 2:25-35). Already the shadow of the cross was looming.

The second sorrow is The Flight into Egypt. No sooner was Jesus born that his life was threatened by King Herod, who fears this child born in Bethlehem, seeing in Him a threat to his rule. The angel of the Lord appeared to Joseph in a dream with the command: “Get up, take the child and his mother, and flee to Egypt. Stay there until I tell you otherwise. Herod is searching for the child to destroy him” (see Matthew 2:13-15). Rendered homeless, Mary, Joseph and the child Jesus became refugees fleeing for their safety.

The third sorrow is The Loss of the Child Jesus for Three Days. Every year the parents of Jesus faithfully made their pilgrimage to Jerusalem for the celebration of the Passover. Following this custom, they observed this same tradition when Jesus was 12 years old. However, upon their return Jesus was not with them; He had remained behind. On the third day, Mary and Joseph “came upon him in the temple sitting in the midst of the teachers, listening to them and asking them questions. All were amazed at his intelligence and his answers.” Nonetheless, for the three days that Mary and Joseph searched for Jesus, they were searching “in sorrow,” the parents of a lost child; Mary and Joseph did not grasp the meaning of Jesus’ words: “Why did you search for me? Did you not know I had to be in my Father’s house?” The loss of the Child was mingled with wonderment as Joseph and Mary struggled to understand the mission of their Son, both human and divine (see Luke 2:41-50).

The fourth sorrow is Mary Meets Jesus on His Way to Calvary. “Jesus was led away and carrying the cross by himself” (John 19:17). Can one imagine the sorrow in Mary’s heart as she sees her Son, beaten, bruised and humiliated, now weighed down by the cross He carried for us? No doubt, as the crowds pressed on, Mary at times could only see Him from a distance — a mother helpless to aid her suffering Son! (Luke 23:27-31).

The fifth sorrow is The Crucifixion and Death of Jesus. The deep sorrow piercing Mary’s heart as she follows Jesus along His via crucis now grew even greater as she witnessed the crucifixion and death of Jesus. The suffering of Jesus became her suffering, a suffering beyond human understanding, a suffering that even the words of Simeon’s prophecy could not fully unveil (John 19:25-30). Yet in this hour of her torment she accepted becoming Our Mother. Like her Son, she thirsted for humanity to be ransomed from this dark hour. Ironically, the only comfort came from the words of Jesus: “It is finished” (John 19:25-30).

The sixth sorrow is The Body of Jesus Is Taken down from the Cross. Faith gave this Mother exceptional strength to stretch out her arms to receive her dead Son. Even Michelangelo, whose Pieta has inspired and captured the hearts of many, would, I believe, say his extraordinary sculpture can only give a glimpse of Mary’s strength. Throughout the entire Passion of Christ, Mary remained ever-present, ever-faithful, ever-Mother! (Luke 23:50-54; John 19:31-37).

The seventh sorrow is The Body of Jesus Is Placed in the Tomb. From the time her Son was born in a cave at Bethlehem to this darkest hour when her crucified Son was prepared for burial (Luke 23:50-56; John 19:38-42; Mark 15:40-47), Mary was never free from the suffering and heartaches of humanity. Indeed, her Litany bestows titles of which she is so worthy as Mother of God, but she who is Queen of Heaven and Earth merited these titles because she, like her Son, was immersed in the human condition. Because of this, age upon age has sought her intercession.

“On Calvary, Mary was united with Son in a love that was both supernatural and maternal. In faith, she loved her dying Son with a Mother’s love. She experienced an unimaginable tenderness for her Son, who in love and obedience to His Father laid down His life. In that tenderness, she did not resent the Will of her Heavenly Father; rather, she embraced it. Understanding the love of the Father for His Son and for those redeemed by His death, her tenderness reflected so clearly the tender love of the Father!” (James Cardinal Hickey, Mary at the Foot of the Cross, Teacher and Example of Holiness, p. 112).

During these troubled times, we invoke the intercession of this tender, loving Mother to intercede before her Son, asking that He bring us to healing, restoration and an end to the darkness now enveloping His children.

United with you in prayer and daily remembering you at the altar, I remain

The Most Reverend Salvatore R. Matano
Bishop of Rochester