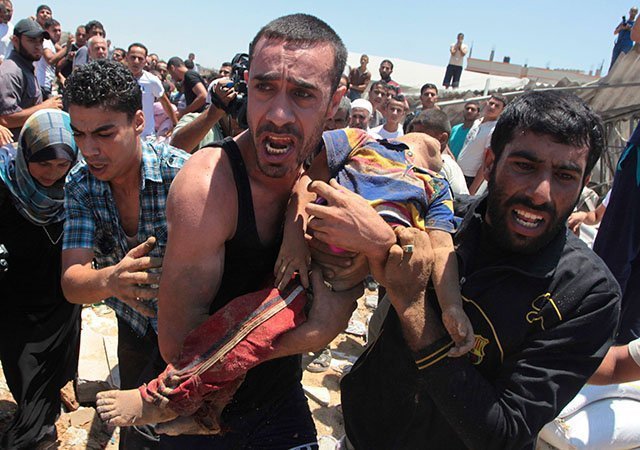 People carry the body of a Palestinian boy whom hospital officials said was killed in an Israeli airstrike on his family's house in Gaza City July 9. The Israeli army intensified its offensive on the Hamas-run Gaza Strip, striking Hamas sites and killing dozens of people in a military operation it says is aimed at quelling rocket fire against Israel.

JERUSALEM (CNS) — Members of the tiny Christian community in the Gaza Strip have been keeping tabs on each other and lending a helping hand to keep each other safe during Israeli airstrikes throughout the region, but nowhere in the territory is really safe, said a priest at the territory’s only Catholic parish.

Father Jorge Hernandez, an Argentine member of the Institute of the Incarnate Word, said that one night, after a bomb siren sounded, he helped three Sisters of Charity evacuate 20 handicapped children from their home to his.

"We had to carry all the children in our arms," Father Hernandez told Catholic News Service in a telephone interview. "There is no space in my house, so we laid down blankets on the floor and put the children there.

"It was very intense and there was a lot of fear, but the bomb fell farther away," he said.

Israel has said that its airstrikes in populated areas are targeted to the homes of militants, and they give phone warnings to all civilians in the house to leave the premises before attacking. The airstrikes began July 8.

While some people leave after the phone calls, there have been reports of others climbing on the roofs of houses to act as human shields. Almost half of the more than 100 Gazan dead are civilians, including women and children.

Smoke rises after an an Israeli airstrike in Gaza City July 8. The Israeli army intensified its offensive on the Hamas-run Gaza Strip, striking Hamas sites and killing dozens of people in a military operation it says is aimed at quelling rocket fire against Israel.

Father Hernandez said that three Gaza neighborhoods had been warned to evacuate, but there are no safety zones large enough for all the residents. Instead, the people seek refuge in government- and U.N.-run school buildings, he said.

"Everything is so close there is no place for them to go," he said. "They are 100,000 people who have been told to leave, and then there is the problem of food and water for them. It is an enormous problem."

The people of Gaza suspected that an attack was imminent a few days before Israel launched Operation Protective Edge, so the people prepared themselves by stocking supplies. Some neighborhood stores remain open, Father Hernandez said, and Israel has said it continues to allow food and humanitarian supplies to be taken into Gaza by truck. Media reported some 240 Palestinians with foreign passports have been allowed to leave the Gaza Strip.

Holy Family Parish was about to begin its summer camp and Father Hernandez was celebrating the opening Mass when the bombing began, he said, adding that the children were sent home.

The Sisters of the Institute of the Incarnate Word have been calling members of the parish to check up on them on a daily basis, he said, and he has remained in touch with his parishioners either by phone or by Skype. He is also in touch with the Greek Orthodox priest and Baptist pastor, and they remain united in helping the Christian community, he said.

"Maintaining contact with the people is important. Maybe I can’t reach them myself because of safety, but, for example, there is a very elderly woman who did not have any water on one of the most intense days of bombings, so I couldn’t go there but I called a neighbor who lived close by to bring her water," he said.

Some 1,300 Christian Palestinians now live in Gaza amid 1.8 million Muslims, with 130 Catholics, a sprinkling of Baptists and a large majority of Greek Orthodox.

The Gaza Strip is a small area and the Israeli attacks are wide-ranging, said Father Hernandez, so there is no safe zone. Some Christian homes have had slight damage as a result of bombings, but as a whole most of the community has remained safe, and there have been no injuries, he said.

The Rosary Sisters serving in Gaza had left to visit their families when school ended, he said, as had his assistant priest, a Brazilian also from the Institute of the Incarnate Word. Three nuns of the same order — from Argentina, Brazil and Egypt — are currently in Gaza serving the parish.

Israelis in southern Israel have been under constant attack from missiles lobbed at them from within Gaza by Hamas militants, and residents of southern Israel have spent long hours in bomb shelters. Israel said July 11 that more than 550 rockets had been fired into Israel reaching into Tel Aviv, Jerusalem and as far north as the coastal city of Zichron Yaakov. Though there has been significant property damage, only one civilian and two soldiers have been reported injured. Most of the rockets have been intercepted by Israel’s Iron Dome defense system.

The bombings are not the only thing worrying the small Christian community in Gaza, Father Hernandez said.

Hamas is very strong in Gaza, he said, "and that makes people afraid that if the conflict continues for a long time — which it looks it will if someone does not come and stop it — there will be popular reaction against the Christians, as they have seen happen in other conflicts in the region."

"When (the militants) see they are threatened and are going to lose, they usually go against the weaker segment of the population," the priest said.

In addition, he said, before Operation Protective Edge began, an extremist Islamic group active in Iraq and Syria had demonstrated in Gaza.

"So you can see up to what level of fanaticism there is here, and people know that and (people) are afraid," he said.

Father Hernandez described as a "cocktail" of very extreme forces present in Gaza and said the tiny Christian population was worried because of what they have seen happen to Christian communities in Syria and Iraq.